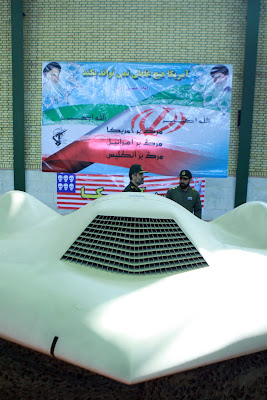 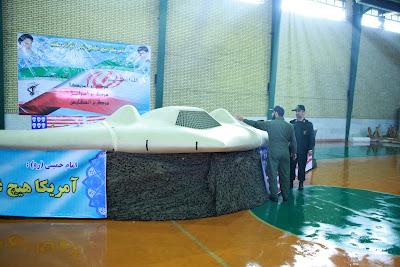 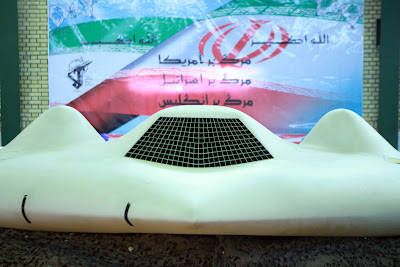 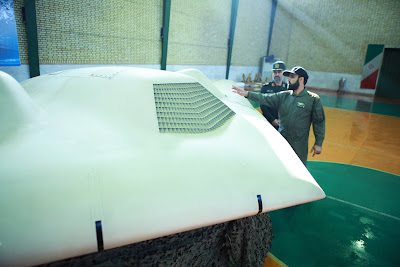 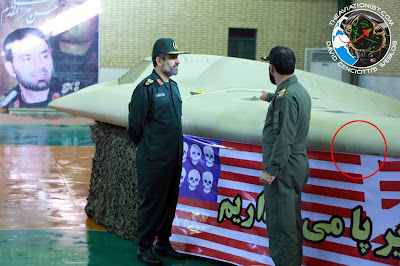 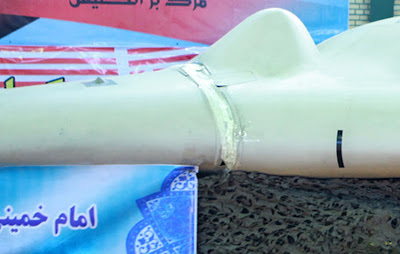 Light blasted image (enhanced) of inlet showing there is indeed an engine contained within. This is no fake shell. 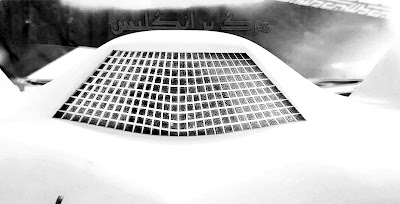 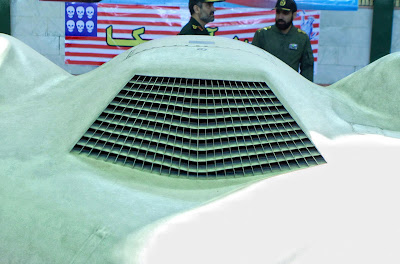 Contrast and enlargement shows putty used to patch wing together: 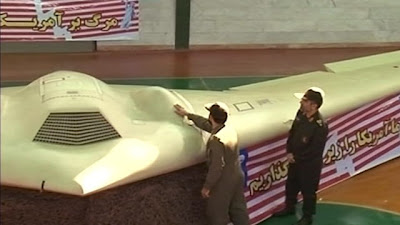 Speculation among experts are split on the purported video of the UAV in Iran's possession - may be a model - a mock-up or a fake.

I think it's the real thing.

Marks on the fuselage match those in photos of the UAV that have been in wide circulation since 2010.

I think I'll do some more enhancement work on the video and stills and post the results soon - but for now ... I think it's the real deal.

Note: Looking at higher rez-video shown on TV news programs show lots more detail and it's clear it's a real RQ-170 - although it does look like it was pieced together after crashing. The video does not show any proof the Iranians shot down the craft. 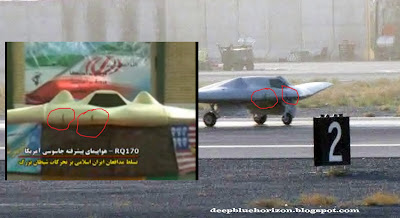 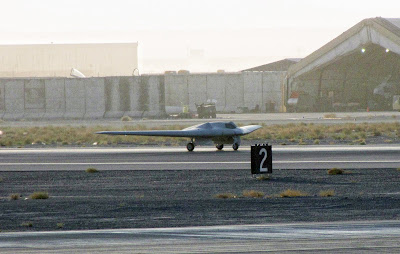 
Tehran, Iran (CNN) -- Iranian TV aired images Thursday of what it says is a U.S. stealth drone that went down in Iran last week, an apparently intact RQ-170 drone propped on a pedestal and triumphantly displayed.

"Military experts are well aware how precious the technological information of this drone is," said Brig. Gen. Amir Ali Hajizadeh, commander of the Islamic Revolutionary Guard Corps Aerospace Forces, according to the semi-official Fars News Agency.

Aired by the official Press TV network, the video showed different angles of the unmanned aircraft. It had been flying over the eastern town of Kashmar when it went down, the network said.

"Recently, our collected intelligence and precise electronic monitoring revealed that this aircraft intended to infiltrate our country's airspace for spying missions," Hajizadeh said.

"After it entered the eastern parts of the country, this aircraft fell into the trap of our armed forces and was downed in Iran with minimum damage."

He said the wing-to-wing width "is around 26 meters with a length of 4.5 meters and height of 1.84 meters" and the aircraft "is equipped with highly advanced surveillance, data gathering, electronic communication and radar systems."

Hajizadeh said B-2 and F-35 planes have used the technology found in the aircraft, which is guided via "satellite link and land stations in Afghanistan and the United States.

"As far as its platform and coating are concerned, this kind of plane has been designed to evade radar systems and from the viewpoint of technology it is amongst the most recent types of advanced aircraft used by the U.S.," Hajizadeh said.

The authenticity of the video could not be independently confirmed, but the seemingly good condition of the plane fueled talk about how the incident happened and whether the drone on display was the real one.

Commentators on Press TV expressed surprise that the craft was captured in such good shape. U.S. officials said the drone crashed.

John Pike, director of GlobalSecurity.org, said his initial reaction to pictures sent to him by CNN is that they weren't what he would expect to see after a crash. He said he's guessing that the object is a mockup prepared for a parade, noting a U.S. flag in the picture.

Bill Sweetman, an aviation analyst, said the craft appears to be the RQ-170, and it looks real to him.

If the drone came down in what he called a flat spin, or what is known as a falling leaf departure, the plane would be pretty much intact, he said, but the belly would be badly scraped. He said all of the electronics inside would most likely be in one piece.

Sweetman doubts the Iranians hacked into the system and took control of the aircraft. It is much more likely it crashed by itself, he said, since "that is what drones do."
And the condition also suggests it was not shot down but was a system failure. There are no burn marks from a fire, no holes, and no outer damage. Sweetman noticed a dent along the leading edge but doesn't know what that means.

The CIA and the Pentagon would not comment on the latest development.
Two U.S. officials confirmed to CNN on Tuesday that the drone was part of a CIA reconnaissance mission that involved both the intelligence community and military personnel stationed in Afghanistan.

A senior U.S. official with direct access to the assessment about what happened to the unmanned aircraft said it was tasked to fly over western Afghanistan and look for insurgent activity, with no directive to either fly into Iran or spy on Iran from Afghan airspace.

The official Islamic Republic News Agency and Fars said Iran's Foreign Ministry summoned the Swiss ambassador to Iran, who received an official reprimand for the U.S. actions. Switzerland represents U.S. interests in Iran, which doesn't have diplomatic relations with the United States.

Iran demanded U.S. reparations for the act, which it says is "against every international law and regulation, as well as contrary to the region's peace and security," Fars said.
Posted by Steve Douglass at 11:42 AM No comments: