Another two senior terrorists bite the big one. 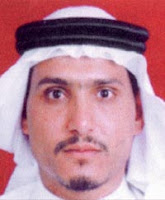 Iraqi security forces killed a suspected senior leader of al Qaeda in Iraq during an operation in the northern city of Mosul, the U.S. military said Wednesday.

On Monday Iraqi Prime Minister Nouri al-Maliki said two of the most wanted terrorist figures in Iraq had been killed in a joint Iraqi-U.S. operation.

Ground forces surrounded a house and used rockets to kill the two, who were hiding inside, al-Maliki said.

The U.S. military said an American helicopter crashed during the assault, killing one U.S. soldier.

U.S. Vice-President Joe Biden called the killing of the two a "potentially devastating blow" to al-Qaeda in Iraq.

There have been false alarms before about the fate of al-Masri. At least twice — in 2006 and in May 2007 — reports circulated that al-Masri was dead, but they were later proven wrong.

Al-Masri took over al-Qaeda in Iraq after its leader, Abu Musab al-Zarqawi, was killed June 7, 2006, in a U.S. airstrike northeast of Baghdad.

Little is known about al-Baghdadi, who is credited with organizing the Sunni insurgent campaign over the past years.

Read more: http://www.cbc.ca/world/story/2010/04/19/iraq-leaders-al-qaeda.html#ixzz0lkaXarpX
Posted by Steve Douglass at 8:49 AM No comments: