The deployment of the nuclear-powered carrier, one of the world's largest warships, would represent a major show of force by the U.S., which has vowed to protect South Korea and is seeking to blunt aggression from North Korea. An international investigation last month blamed North

Korea for torpedoing a South Korean navy vessel, the Cheonan, in March, killing 46 sailors. Two U.S. defense officials, who spoke on condition of anonymity because the decision had not been made, said that a decision on deployment was likely by week's end. Last week, the Pentagon announced that it was planning two major military exercises with South Korea to take place in the "near future."

The exercises were to focus in part on anti-submarine operations. The officials said the George Washington's deployment would be separate from the upcoming exercises. The latest plans to bolster military cooperation in the Yellow Sea was aimed specifically at sending a message to North

Korea that the U.S. would help defend South Korea if necessary. The deployment of the aircraft carrier would be seen as a particularly aggressive move by the United States because of its sheer size.

According to a Navy website, the carrier is 244 feet high from keel to mast and can accommodate some 6,250 crew members. Built in the 1980s, the carrier uses two nuclear reactors that would allow it to steam almost 18 years before needing to refuel. The sinking of the Cheonan was South Korea's worst military disaster since the Korean War, which started 60 years ago and ended in a cease-fire in 1953. No formal peace treaty was ever signed, and more than 28,000 U.S. troops remain stationed in the south, a critical regional ally.
Posted by Steve Douglass at 7:57 PM No comments: 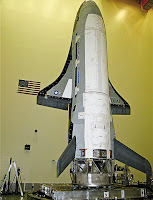 An international think tank has published a report questioning the military usefulness of the U.S. Air Force’s X-37B military space plane and suggesting that the ongoing orbital experiment could inspire other space-faring nations to develop countermeasures.
The report, “X-37B Orbital Test Vehicle Fact Sheet,” was produced by the Secure World Foundation, a private group of researchers advocating the peaceful use of outer space.

The report does not doubt the U.S. Air Force’s contention that it is testing the X-37B to pave the way for a space shuttle-like military craft that would launch and retrieve unarmed satellites. But the report suggests that the experiment, which the Air Force began last month by launching the craft on an Atlas 5 rocket, could have unintended consequences because there is so much secrecy surrounding it.

“This is a technology which very well could be used offensively, and other countries like Russia and China could see that as a threat,” said Brian Weeden, the retired Air Force captain who wrote the paper for the foundation. 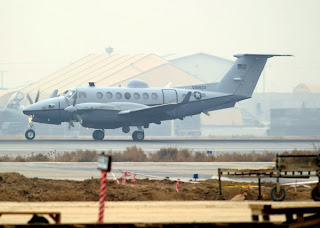 By Tom Vanden Brook - USA Today
Posted : Wednesday Jun 2, 2010 8:46:37 EDT
WASHINGTON — The Pentagon is increasingly relying on its latest addition of aircraft in efforts to gain more intelligence on the ground in Iraq and Afghanistan, records show.

Rather than an unmanned drone, the MC-12 Liberty is a four-person, twin-engine propeller plane based on a civilian aircraft used around the world.

Since Defense Secretary Robert Gates rushed the planes into service June 2009, the intelligence gathered by MC-12 crews has helped capture dozens of insurgents, disrupt networks that produce improvised explosive devices (IEDs) and discover such bombs before they could kill U.S. troops, according to information the Air Force declassified for USA Today.

Intelligence gathered by the planes has led to:

• Capturing 60 terrorists and criminals in Iraq.

• Killing or capturing 20 insurgents in Afghanistan, including four commanders.

• Locating and identifying roadside bombs around the southern Afghan town of Marjah in advance of a Marine-led offensive there in March.

The push for better intelligence in Afghanistan comes as violence continues to surge, particularly the placement of IEDs. In April, insurgents planted 1,058 makeshift bombs, compared with 435 in April 2009, according to the Joint IED Defeat Organization.

The MC-12 is a Hawker Beechcraft 350 with a camera that can supply video to troops on the ground and sensors that can intercept enemy communication. The crew consists of two pilots, an airman who operates the sensors and a cryptologist who analyzes the intelligence the plane scoops up.

The Air Force plans to spend $100 million to train airmen on using the aircraft's spy technology over the next two years, Air Force budget records show.

Although the MC-12s are more durable and capable of flying in bad weather than drones, they can't stay aloft as long, said Col. Dan Johnson, who commands the 480th Intelligence, Surveillance and Reconnaissance Wing. A Predator or Reaper drone can fly for 24 hours, vs. an MC-12's six hours.

Gates pushed the Air Force to buy the planes quickly after a task force identified the need for more spy planes to collect information about insurgent activity in Iraq and Afghanistan.

The final decision will be made next year, the Air Force said in a statement.

"This plane is a flying intelligence shop," said Maj. David Kurle, an Air Force spokesman at the operations center.

Using manned planes along with drones has allowed the Air Force to put more spy planes in the air faster than if it relied solely on drones such as the Predator and Reaper, said John Pike, director of Globalsecurity.org.

"It takes a finite amount of time to fabricate a drone," Pike said. "They can buy these airplanes on eBay. The Air Force wanted to get into persistent surveillance with both feet. This plane allows them to do that."

Capt. Tucker Hamilton, 30, an MC-12 pilot at Bagram Airfield in Afghanistan, said he has flown missions to look for survivors of an avalanche and to locate insurgents.

"The weather sucked today," he said in a recent interview. "But we were able to fly all our missions."

Johnson interviewed, researched and wrote a paper for the Air Force exploring whether drones or manned planes were better at spying on insurgents.

"It turned out that we need both," he said in an e-mail.

Posted by Steve Douglass at 6:29 AM No comments: