(CNN) -- Just days before his planned trip to New York, Iranian President Mahmoud Ahmadinejad said he has proof the United States and Israel are linked to the world's leading terrorist organizations, according to state-run media.

"We have documents that prove (Washington) is the root of world terrorism," Ahmadinejad said in a speech in Tehran, Press TV reported. "It has been aiding and abetting extremist groups over the past years."

Ahmadinejad said his nation "cuts any hand that signs a document against Iran," according to the semi-official FARS news agency.

His remarks came as the United States pushes for new international sanctions against Iran over its refusal to halt its nuclear program.
Ahmadinejad plans to attend a United Nations summit on the Nuclear Non-Proliferation Treaty, which opens Monday,

The United States "is the only country to have used the atomic bomb in military conflict," Ahmadinejad said Saturday, according to Press TV. "They even admit themselves that they resorted to using (similar weapons) during the war they waged on Iraq."
The United States has not admitted using such weapons in the Iraq war.

Ahmadinejad planned to offer at the U.N. conference major proposals that would allow Iran to maintain its nuclear program, his top adviser, Mojtaba Samareh Hashemi, said, according to IRNA official news agency.

Iran insists that its program is aimed at producing nuclear energy, while Washington accuses it of seeking to develop nuclear weapons.

Ahmadinejad urged the United States to engage his government, saying that "companionship is better than confrontation," FARS reported.
His remarks came at a ceremony celebrating May Day, or International Workers' Day.

On Thursday, Secretary of State Hillary Clinton condemned Ahmadinejad in some of the Obama administration's strongest language to date.

"The United States is committed to pursuing [a] diplomatic path," she said. "But we will not compromise our commitment to preventing Iran from developing nuclear weapons."
Posted by Steve Douglass at 5:48 AM No comments:

"We were lucky" car bomb in NYC a dud. 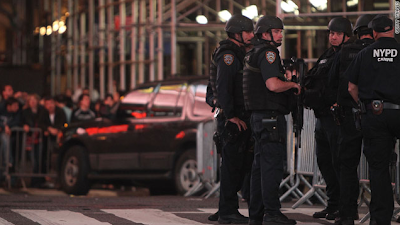 CNN) -- A T-shirt vendor who noticed smoke coming out of a tinted, dark green sport utility vehicle alerted police to what turned out to be a potential bomb placed in Times Square.
"We avoided what could have been a very deadly event," said Mayor Michael Bloomberg early Sunday morning. "It certainly could have exploded and had a pretty big fire and a decent amount of explosive impact."

President Obama, who was updated on the situation late Saturday night, said the federal government was prepared to provide support. The Department of Homeland Security also said it was monitoring developments.

Two federal officials said Sunday it was too early to tell whether the incident involved al Qaeda or another international terror group. The national threat level remained at "yellow," or elevated.

Federal official: 'Too early' to call it terror incident
Officials said authorities are going through video from dozens of surveillance cameras in Times Square to determine who left the Nissan Pathfinder with its engine running and hazard lights flashing on a street shortly after 6 p.m. Saturday.

The wiring around the device "looked amateurish," Bloomberg said.

A robot from the city police department's bomb squad smashed through the back window of the SUV and retrieved the box after several hours. It was taken to a bomb squad facility in the Bronx.
Shortly before 6 a.m. Sunday, the Pathfinder was loaded on to the back of a flatbed truck, covered

with a yellow tarp and towed away
The forensics on the bomb component will take time and are complex, a federal law enforcement official said. But, the official said, "the scientists can do wonders."

Officials did not immediately know how the bomb would have been detonated, nor did anyone claim responsibility.

"So far, we have no reports of anybody running away (from the car)," Bloomberg said. "That doesn't mean there won't be when we look at all the cameras."

Authorities may also appeal to the public to provide personal photos taken at the time, a federal law enforcement official said.

Following the incident, security in other burroughs was heightened, but nothing suspicious was reported anywhere else, the mayor said.
The vehicle's VIN number had been removed, but investigators said they remained hopeful that they will be able to locate a VIN somewhere in the vehicle; they are stamped in various places, the official said.

With that information, they can trace the history of the SUV to some degree.
The Pathfinder's license plate was taken from another truck, Bloomberg said. Authorities interviewed the truck owner who told them he took it to a junkyard. The mayor said authorities did not have reason to believe the truck owner "had anything to do with it or his story is false."

A law enforcement official told CNN on Sunday that the Connecticut plate came from an automobile junkyard near Bridgeport, Connecticut. Under Connecticut law, plates must be returned to a local Department of Motor Vehicle branch or to a Connecticut state trooper if a car is to be junked for scrap metal.

"I told my friend, 'Yo yo look at this!' I mean it looks like a fireworks inside," he said. "I don't know; it's hard to explain. After that, like 15 minutes later, the smoke came out. One of the officers came, and he started kicking everybody from the corner for safety."

The Marriott Marquis hotel did not allow anyone to enter or leave. A nearby TGIFriday's restaurant shut its doors and evacuated staff. Theater-goers found themselves unable to leave shows.
Pamela Hall was at a McDonald's when a police officer told her to pick up her food and leave.

"They told us to go straight to 47th street," Hall said. "Nobody was frightened. The cops weren't upset and the people were not noticeably upset. We were all just perplexed. We just went to 47th street and ended up taking pictures and watching."
Speaking to reporters, Bloomberg said: "You know we often say that when a terrorist is caught, he has a map of New York City in his pocket. ... And tonight is a further reminder of the dangers that we face."

Early Sunday morning, Gov. David Paterson issued a statement commending the police department.
"Tonight, we owe an incredible debt of gratitude to the heroic actions of the New York City Police Department and to a single vigilant New Yorker who identified a suspicious vehicle near Times Square in New York City," he said.

"Luckily, no one is hurt, and now the full attention of city, state and federal law enforcement will be turned to bringing the guilty party to justice in this act of terrorism."
Posted by Steve Douglass at 4:59 AM No comments: