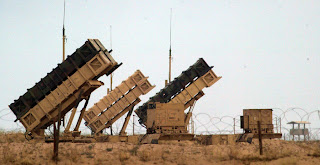 A Patriot surface-to-air missile battery was deployed in Haifa on Monday, two days after an unmanned aerial vehicle breached Israeli airspace from the west.
Israel Defense Forces officials said that the deployment was not an emergency measure, and such systems are deployed to the area from time to time.

Moreover, IDF officials refused to comment on the possible connection between the drone, which was intercepted on Saturday, and the Patriot missile system deployed to Haifa.

The Patriot missile system is a part of Israel’s air defense capabilities, and is meant to defend against enemy warplanes, and intercept missiles.

Last April, a Patriot battery was deployed to Haifa, close to the city’s university. Numerous such systems were in place in Haifa during the Second Lebanon War as well.

The deployment of the battery comes shortly before the beginning of a joint comprehensive drill between the IDF and United States Military commands, which has been called AC12. The AC12 drill entails testing the active defense capabilities of the two military organizations.

The last joint-command drill, “Juniper Cobra,” which took place in 2010, included the use of Patriot missile systems.
Then, ten Patriot missiles were fired at UAVs simulating a breach of Israeli airspace. The Israeli air defense establishment has labeled the AC12 as “a significant factor in improving our combat capabilities” with the United States.
The Israeli Air Force shot down an unidentified aerial vehicle that penetrated Israel's airspace on Saturday. IDF forces shot down the drone over the Negev, south of Mount Hebron.
Read the rest of the story here.
Posted by Steve Douglass at 1:54 PM No comments:

The Defense Advanced Research Projects Agency has announced that two modified Global Hawk drones have demonstrated they can "safely and autonomously operate under in-flight refueling conditions," but challenges remain. 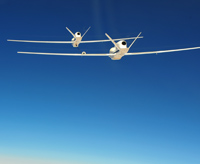 The tests actually took place several months ago, and DARPA researchers have been poring over data acquired during those tests to reach their conclusions. Researchers expected low success rates over multiple attempts because Global Hawks are designed for endurance, not refined control authority in formation flight. But DARPA this week said data analysis shows that close formation flights show that "60 percent of the attempts would achieve contact." And that could eventually lead to changes the mission profiles and capabilities of unmanned aerial systems.

The tests flew the aircraft in formations that kept a refueling probe and receiver at distances of 100 feet or less over hours at a time at altitudes above 44,000 feet. They applied different breakaway scenarios and contingencies and found that the aircraft successfully avoided potentially hazardous conditions.

The latest tests were the ninth in a series that have advanced since 2007. In those tests, DARPA and NASA teamed to show that high-performance aircraft operated with human observer pilots could perform automated refueling from conventional manned tankers. Fitting Global Hawk aerial vehicles with air-to-air refueling capabilities would allow the aircraft to carry heavier payloads at takeoff and prolong mission times. The FAA is currently working to formalize regulations that would dictate the operation of unmanned aerial systems (UAS) in the national airspace.

Posted by Steve Douglass at 11:29 AM No comments: