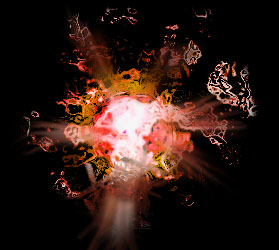 Al ARABIYA NEWS :  A spy device camouflaged as a rock exploded when it came into contact with Iranian troops near an underground nuclear enrichment plant, The Sunday Times reported this week.

Last month, Revolutionary Guards at the Fordo nuclear facility, near the northern city of Qom, came across the rock and attempted to move it, according to sources who spoke to the newspaper.
The guards, who had been on patrol to check terminals connecting data and telephone links to the site, reportedly witnessed the disguised spy device exploding when they came into contact with it.

Experts who surveyed the scene of the explosion, according to the newspaper, analyzed remnants of the device and found it had been able to intercept data from computers at the nuclear plant, where uranium is enriched.

News of the explosion was reportedly first kept secret by the Iranians. But last week, Fereydoun Abbasi the Iranian vice-president and the head of the nuclear energy agency, revealed that the power lines between Qom and the Fordo facility were blown-up in August.

The finding has sparked speculation over whether the spy device could have been a significant source of intelligence for Western countries, which has now been lost.

Israel believes Iran's nuclear program to be aimed at developing an atomic weapons capability that would menace its own existence, and its current status as the Middle East's sole, if undeclared, nuclear weapons power.

Iran insists its program is exclusively for peaceful, civilian ends, but it is locked in a deepening standoff with the U.N. nuclear watchdog and the U.N. Security Council over the issue.

The existence of the site was unknown until it was uncovered three years ago in 2009, according to The Sunday Times, which added that the nuclear plant has been under surveillance by American, British and Israeli intelligence agencies.

It is believed that there are up to 3,000 centrifuges which are pieces of equipment used to separate substances of different densities and rotates at high speed that are hidden under 260ft of rock.

There are reports that claim the explosion was planned to cut the power supply to the plant and damage the centrifuges, however, inspectors from the International Atomic Energy Agency, who visited the site the day after the explosion occurred did not state that there was any damage or disruption to the plant in their reports.
READ THE REST OF THE  STORY HERE
Posted by Steve Douglass at 8:54 PM 1 comment: