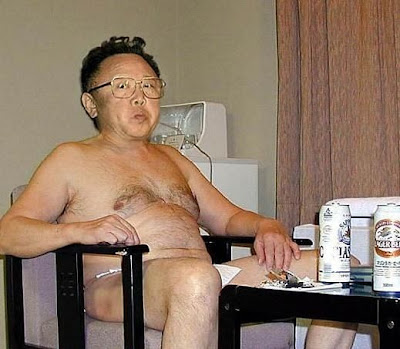 North Korea: Sanctions a declaration of war: "North Korea said today it will view as a 'declaration of war' any sanctions or pressure applied against it after its rocket launch earlier this month. In an announcement on state-run television, the country said it was ready to step up efforts to develop nuclear weapons and poised for a military response to any moves against it.

Iran sentences U.S. journalist to 8 years: "Roxana Saberi, a 31-year-old Iranian-American journalist from North Dakota, was sentenced to eight years in prison for espionage, her father and Iranian media said today -- a sentence that prompted sharp denunciations from political and media officials. Her father in Iran told National Public Radio that the decision will be appealed. 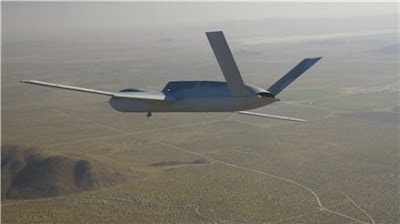 While company officials are not calling it a stealthy aircraft, they will admit to a reduced radar signature. The 20-hour-endurance UCAV's undeniably low-observable design offers clues about how it could be employed.

A weapons bay allows internal carriage of 500-pound bombs with GBU-38 Joint Direct Attack Munitions with GPS navigation and laser guidance kits attached. Given the aircraft's 41-ft length - which will increase by at least two feet in the second test aircraft - the weapons bay appears to be 10-feet long.

Editors note: New predator looks like it owes a lot to TACIT BLUE. 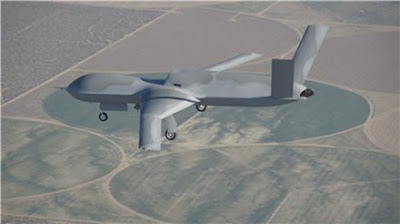 The bay doors can be removed to allow installation of a semi-submerged, wide-area surveillance pod. The aircraft is designed to carry about 3,000 pounds of weapons and sensors. For an additional two hours of flying time, fuel tanks also can be installed in the weapons bay.

A long, featureless underside further provides an ideal location for a sensor such as an all-weather, active electronically scanned array (AESA) radar. The wide-area surveillance system - to be provided by the U.S. Air Force - has yet to be defined. It would be carried by a specialized all-reconnaissance version of the Avenger.

The hump-backed design of the aircraft offers room enough for a serpentine exhaust to prevent radar observation of the turbine. Pratt has been developing an S-shaped exhaust system that both offers protection from radar and cooling to reduce the infrared signature. The engine is expected to provide an airspeed of at least 400 knots, but company officials say envelope expansion tests may prove the speed to be "considerably greater". The UCAV's operational altitude would be up to 60,000 feet.

The Avenger's 17-degree sweep, 66-ft. span wing and tail are all aligned in plan view with one or other of the leading edges. This is the same shaping discipline used on classic stealth designs like the F-22 and B-2.

The cranked trailing edge provides the aerodynamic and structural benefits of a tapered wing and helps shield the engine inlet from radar. Other design elements, from nose to tail, help avoid radar cross-section hot spots that would be caused by a curved side.

The aircraft was designed from its inception so that the wing could be folded at the point where it cranks for storage in hangars or for aircraft carrier operations. The UCAV also comes with a tailhook, which suggests that carrier-related trials are planned.

The inner section of the cranked wing is deep, providing structural strength for carrier landings and generous fuel volume while maintaining a dry, folding outer wing.

Editor's note: The original version of this story included erroneous dimensions, which have since been corrected.

Posted by Steve Douglass at 8:18 PM No comments: