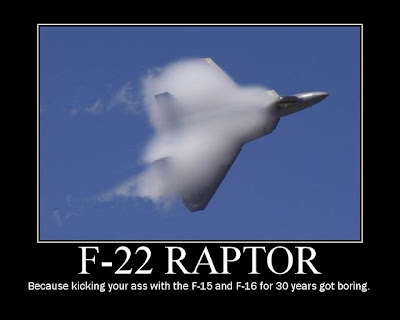 The debate over the imposition of a no-fly zone is paralyzed by the specter of the U.S. having to attack Libyan surface to air missile (SAM) sites as a precursor to such an operation. Secretary of Defense Gates effectively shut down discussion of the no-fly option when he asserted in testimony that such an operation would begin with attacks on Libyan SAM sites.

Apparently, the Secretary forgot that he has an airplane specifically designed to operate in contested airspace, full of hostile SAMs and aircraft. It is the world’s first fifth-generation fighter, the F-22. With its stealth features, supercruise power and advanced sensors, the F-22 is designed to operate against air defenses operating so-called triple digit SAMs and lots of fighters. This is a much tougher air defense environment than existed in Iraq in 2003 or exists today in Libya. The existing fleet of F-22s supported by the necessary enablers such as AWACS should be able to extend a no-fly zone over the rebel-held portion of Libya.

A problem like Libya will be even easier to solve when the U.S. deploys its other fifth-generation aircraft, the F-35 Joint Strike Fighter, in a few years.

The F-35 also will have stealth features and advanced sensors to defeat air defenses. Designed as a strike aircraft for heavy air defense environments, the F-35 would be perfect for conducting operations against Libyan targets. But in addition, the F-35 also will be deployed on ships. There is one variant designed for aircraft carriers and another, the short-takeoff-and-vertical-landing (STOVL) F-35B, which will be able to deploy from large deck amphibious warfare ships such as the two now off Libya’s shores. Replacing the aging Harrier aircraft the Marines currently fly, the STOVL F-35 will carry a significant payload of smart bombs and air-to-air missiles to longer ranges while maintaining a stealthy flight profile. When paired with the carrier-capable E-2D Hawkeye, ship-based F-35s could enforce a no-fly zone without the need for land-based combat or surveillance aircraft.

The idea that the will of the Free World and the ability of the U.S. military to operate where and when it chooses can be stymied by the threat from the obsolescent, poorly-maintained and badly trained Libyan air defense system is ludicrous. With its fifth-generation aircraft, the F-22 and soon the F-35, the U.S. military should be able virtually to ignore those defenses and stop Libyan air operations cold today.

RELATED: TUG OF WAR OVER US OPTIONS
Posted by Steve Douglass at 1:31 PM No comments:

We should take out Gadhafi's choppers and he'll have no power... 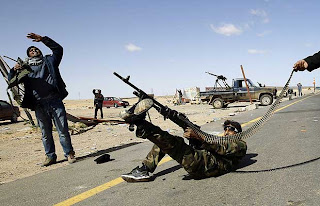 "I think it's modest," Amos responded. "I think probably their greatest threat are their helicopter-type forces."

Amos didn't know how many helicopters and fixed wing aircraft the Libyan government has but said the forces are predominately concentrated in four airbases around Tripoli.

"Has it been your experience in combat if the enemy controls the air above, particularly in terrain like Libya, it gives them an enormous advantage," McCain asked.

Amos would not answer the question directly, calling the environment where the Gadhafi forces are located "very complex."
"Sir, I think there are several things that would give the enemy enormous advantage. One is the ground movement of forces, vehicles, movement on the ground," Amos said. "So I think it's more than just aviation."

The Libyan Air Force has major deficiencies in its operational capabilities, according to Jane's Information Group, which does analysis of military forces. Its assessment notes it is possible that contract officers fly important missions due to the "low standard of locally trained aircrew."

Libya's Air Force command is in Tripoli, according to Jane's. Their helicopter fleet is small, perhaps no more than a few dozen attack helicopters built more than 30 years ago, it says. But the Air Force is believed to have many utility helicopters, as well, which can be used to move troops and equipment.

Compared with NATO pilots, Libya's fighter jet pilots are believed to get four times less training in the air, Jane's says, and Russian pilots who have been to Libya say that the Libyan pilots have a hard time tolerating high-altitude maneuvers. Most fighter jets are the old Soviet-era MiGs, and fewer than 200 are operational, according to Jane's.

LINK
Posted by Steve Douglass at 12:18 PM No comments: