Posted in Security, 21st December 2011 17:03 GMT
Free whitepaper – King’s College London uses IBM System Networking RackSwitch for HPC
Doubts that Iran managed to bring down an advanced US drone over the country last month using an advanced GPS spoofing attack have been raised by experts, who say that attacks of this type would be extremely tough to pull off.

Iran announced on 4 December that it had captured an advanced American remotely piloted spy drone, thought to be an RQ-170 Sentinel, and proudly broadcast images of the captured kit on state TV. The images depicted a drone that was intact and showed little or no signs of damage.

The Islamic Republic initially claimed that its air forces shot the drone down after it encroached on the country’s airspace near the Afghan border. Iran later claimed it was taken down by a sophisticated cyber-attack. Days later an Iranian engineer said that this attack involved swamping the drone's GPS receivers with a rogue signal that tricked it into landing on autopilot in Iran instead of a US Air Force base.

The unnamed Iranian boffin told Christian Science Monitor that Iran developed the attack after reverse-engineering previously captured or shot down US drones, and by taking advantage inherent weaknesses in the GPS navigation system.

The US said the drone was lost on a mission in Western Afghanistan before conceding it was carrying out a covert spy operation over Iran. The US has asked for the return of the drone via Swiss authorities.

RQ-170 Sentinel drones, nicknamed the Beast of Kandahar, are advanced unmanned aerial vehicle (UAV) with stealth capabilities, developed by Lockheed Martin and operated by the US Air Force, sometimes on behalf of the CIA. The stealth capabilities should have prevented the Iranians from spotting the UAV on radar.

However they might have intensified GPS jamming around uranium enrichment sites to ward off drones, so it is plausible that the downed RQ-170 Sentinel came under a GPS nobbling attack. Publicly available material collated by specialist sites, such as The Aviationist, suggest US drones might be vulnerable to this sort of attack, among others.

However, such GPS spoofing attacks are really tough to pull off and analysts are wary of swallowing Iran's spy drone hacking claims. The Iranian authorities would need to know the location of the drone within a matter of metres and hit it with a GPS signal stronger than the satellites' transmissions.

Neither of these signals are encrypted so the stronger signal would win out, but the hijacker must gradually introduce errors to guide the craft down towards the chosen landing point, all the time maintaining a signal lock, a non-trivial effort established by US academics during experimentation:

According to our experiments, the attacker must ensure that his time offset to the system time is less than 75ns. Any greater offset will cause the GPS receiver to lose lock when the spoofing signal is turned on. A value of 75ns roughly corresponds to a distance of 22.5m, meaning that the attacker must know his distance from the victim with an accuracy of 22.5m (or better) — a higher offset will cause the victim to lose lock due to the signal (chip phase) misalignment.


We confirmed that the initial location offset will cause a noticeable jump of the victim’s reported position during the attack. Large offsets could therefore be detected by the victim by monitoring its position. Any imperfections in the arrival time of the signal from different antennas will directly impact the position calculated by the victim. If the relative time offset gets above 80ns, the signals will even cause the receiver to lose lock. This means that, if an attacker has multiple antennas, he must precisely know the distance from each antenna to the attacker in order to be able to spoof a desired location. We could also observe a general localization error as predicted in our theoretical analysis, even for smaller mismatches in the arrival times.

The paper, On the Requirements for Successful GPS Spoofing Attacks [PDF], compiled by eggheads at ETH Zurich, in Switzerland, and UCI, in Irvine in the US, suggests various countermeasures. The covert satellite-lock takeover attack is straight out of the playbook of James Bond villains*. Iran may be trying to run such attacks, Russia might even be helping, but the probability of such a hijacking succeeding is very low.

Either Iran got very lucky or the the drone was simply lost, possibly a result of a command-and-control failure, or jamming over an nuclear facility that disrupted communications with its base, before fail-safe mechanisms, er, failed. In this scenario, the drone unluckily landed in the desert somewhere (rather than mountains where it would have been destroyed or severely damaged).


READ THE REST OF THE STORY AT: http://www.theregister.co.uk/2011/12/21/spy_drone_hijack_gps_spoofing_implausible/
Posted by Steve Douglass at 11:42 AM No comments: 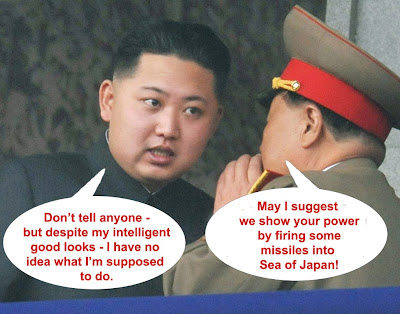 Kim Jong-un, North Korea's new leader, will share power with an uncle and the military after the death of his father Kim Jong-il as the isolated country shifts to collective rule from strongman dictatorship, according to reports.

The source, with close ties to Pyongyang and Beijing, told Reuters that the military, which is trying to develop a nuclear arsenal, has pledged allegiance to the untested Kim Jong-un who takes over the family dynasty that has ruled North Korea since it was founded after world War Two.

The source also said Beijing was only notified of Kim's death earlier on Monday, the same day that North Korean state television broadcast the news. Kim died on Saturday.

The source declined to be identified but has correctly predicted events in the past, telling Reuters about the North's first nuclear test in 2006 before it took place.
The situation in North Korea appeared stable after the military gave its backing to Kim's son and successor, Kim Jong-un, the source said.

"It's very unlikely," the source said when asked about the possibility of a military coup. "The military has pledged allegiance to Kim Jong-un."
Posted by Steve Douglass at 7:37 AM No comments: