U.S. Air Force officials say the first Space-Based Space Surveillance satellite is set to launch July 8 from Vandenberg AFB, Calif. on a Minotaur IV rocket, and another SBSS spacecraft is likely to be purchased to add capacity in orbit.

The Boeing/Ball Aerospace satellite is the first designed specifically to surveil objects in space from space. It features a two-axis gimballed visible light sensor capable of spotting objects in geosynchronous orbit from its low-Earth orbit. The Air Force has lacked this data since the demise of a space-based visible sensor on the Missile Defense Agency’s MSX satellite in 2008.

The requirements for a second SBSS spacecraft have not changed, pointing to the need to buy a clone of the first, according to Col. Stephen Butler, the Air Force Space Command (AFSPC) space situational awareness lead. A second satellite would improve the revisit rate, or number of times in a given time period the SBSS system can spot a particular object. ‘The first sensor is the first step,’ says Col. J.R. Jordan, vice commander of the wing that oversees procurement of space superiority technologies for the Air Force.

Eventually, AFSPC will likely purchase a follow on to SBSS, but that is unlikely near-term and requirements have not yet been set, Butler says. It is likely, however, there will be a competition to build the system, Jordan adds.

The first SBSS satellite is expected to last at least seven years in orbit. Once boosted, in-orbit checkout should take less than 200 days, Jordan says.

The satellite was procured by the Air Force under an $823 million fixed price contract.

SBSS will provide day/night surveillance whereas ground-based electro-optical systems can only capture data at night.

Butler says that he expects a new Space Fence, a series of new ground-based S-band radars, will deliver its first new site in  Australia in Fiscal 2015. Two more sites are expected, including another one overseas and one on U.S. soil.

Raytheon and Lockheed Martin have been forming competing designs for the space fence. However, in parallel, the Air Force is still refining requirements. Air Force Lt. Gen. John Sheridan, commander of the Space and Missile Systems Center, says that -- for example -- the radar size hasn't yet been determined.

Posted by Steve Douglass at 8:16 AM No comments:

Watchkeeper UAV Makes First Flight in UK: "Watchkeeper, the newest unmanned aircraft to join the ranks of the British Army, performed its first flight in the U.K. on April 14, 2010, at Parc Aberporth in West Wales. Parc Aberporth facilities, managed by QinetiQ through- the West Wales Unmanned Air vehicle (UAV) Centre, are premier test facilities for Unmanned Aerial Vehicles in the UK.

Performing the first successful flight was the first milestone in the UAV induction of the Watchkeeper system into Army units, demonstrating that the vehicle and its system meet the robust safety and airworthiness criteria required to fly UAVs initially on ranges and in segregated airspace in the UK. Thales UK, the system integrator and prime contractor, is scheduled to deliver the first Watchkeeper systems to the MOD this year. The Watchkeeper is a derivative of Hermes 450, developed by Israel's Elbit System's Silver Arrow subsidiary.

Watchkeeper is a high-performance, multi-sensor, all-weather, unmanned aerial system  (UAS), remaining airborne for over 16 hours in a single mission. It includes a high degree of automation, with automatic take-off and landing (ATOL), and has a de-icing capability to expand its ability to operate in all-weather operational environment.

Until the Watchkeeper becomes fully operational, the Army relies on the services of a fleet of leased Hermes 450 unmanned air vehicles (UAVs) operated by Thales UK.

The company offers the military an innovative ‘ISTAR-by-the-hour’ contract. Since the contract award, in July 2007, these Hermes 450 UAVs have flown more than 30,000 operational hours in over 2,000 sorties, supporting British forces in current operations, primarily in Afghanistan. The company launched this service in response to an Urgent Operational Requirement (UoR) contract issued by the UK Ministry of Defence (MoD),  running through to contract completion in October this year, which could potentially be extended until April 2011 when the Hermes 450s will be phased out as the new Watchkeeper system delivers frontline capability.

Posted by Steve Douglass at 8:14 AM No comments: 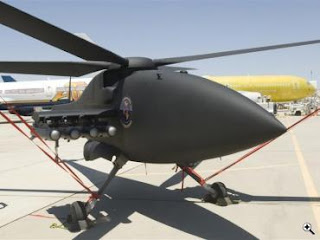 FORT WORTH, Texas - The U.S. Army will soon sign an agreement with U.S. Special Operations Command to borrow one of its A160 Hummingbird UAVs for deployment to Afghanistan, according to Army officials.

The Army has no formal requirement for a vertical-takeoff-and-landing UAV, but the service's deputy chief of staff for intelligence (G-2) is interested in developing a quick reaction capability, said Col. Gregory Gonzalez, the Army's project manager for unmanned aircraft systems (UAS).

On April 16, Gonzalez said, he will sign a memorandum of understanding with Special Operations Command for the A160. The Army plans to install the Vehicle and Dismount Exploitation Radar (VADER) aboard the 2,500-pound UAV and send it to Afghanistan. VADER is designed to track moving vehicles and people on the ground.

Boeing builds the A160; Northrop Grumman developed the VADER.

The Army program office also announced that on April 14 the service's UAVs exceeded one million flight hours. It plans to celebrate the milestone in May with events at the Pentagon and the Smithsonian Museum in Washington.

Posted by Steve Douglass at 8:07 AM No comments:

"External Explosion" Cause of SK Sinking. 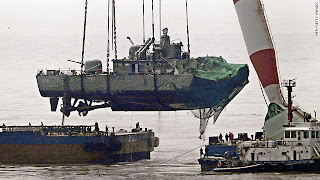 Seoul, South Korea (CNN) -- A South Korean investigator said Friday that an "external explosion" was the most likely cause of the mysterious sinking of a naval ship in which 46 South Korean sailors were lost in tense waters off the North Korean coast.
"There is a higher possibility of an external rather than an internal explosion," Yoon Duk-yong, the co-head of a government-appointed team to investigate the March 26 sinking of the corvette Cheonan, said Friday in a televised press conference.

The Cheonan's stern section, where the missing sailors were believed to have been trapped, was raised from the Yellow Sea bottom Thursday after a salvage operation that was made both risky and difficult by low underwater visibility and strong currents. The bow section is expected to be salvaged next week.
Of the Cheonan's 104-man crew, 58 men were rescued from the sea on the night of the explosion. Thirty-eight bodies have so far been recovered; eight remain missing.
Yoon's comment was based on a preliminary investigation of the stern wreckage. He added, however, that it was necessary "to make a detailed analysis, leaving all possibilities open."

While Seoul has avoided blaming North Korea, Kim has said that a sea mine or torpedo appear the most likely causes. The media has been rife with speculation -- theories aired range from an internal boiler explosion to a North Korean naval special forces attack.

On Thursday, Open Radio for North Korea, a Seoul-based radio station that maintains covert contacts north of the border, announced that Northern authorities are calling the Cheonan sinking "self-inflicted."
North Korea's state-run media have been silent on the issue, and both South Korean and U.S. forces in South Korea say they have not detected any unusual moves by the armed forces of the hard-line state.
However, the Cheonan went down close to the disputed inter-Korean sea border, off which fatal naval skirmishes took place in 1999 and 2002.

If forensic evidence does point to North Korean involvement, it is unclear what moves South Korea could take against a country that has artillery ranged in on Seoul, and which is believed to possess at least six nuclear devices..

The United States declined to strike militarily against North Korea when the spyship USS Pueblo was seized in international waters off North Korea in 1968.

Nor did South Korea retaliate in 2002, when three Southern sailors were killed and their patrol boat sunk in a North Korean attack on the same day that South Korea was playing its last match of the World Cup.
Posted by Steve Douglass at 7:10 AM No comments: