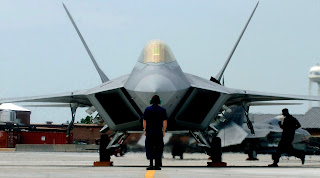 
An F-22 declared an in-flight emergency due to a weapons malfunction on the White Sands Missile Range today at approximately 5:30 MDT.


Sources on the scene report "BOOMER 1" radioed Holloman AFB tower declaring an IFE and that the $142 million stealth aircraft had sustained physical damage due to a "weapons malfunction."

Fire and EOD equipment met the aircraft which landed without incident.

'Holloman AFB is host to the 7th Fighter Squadron (F-22s) that was originally scheduled to be moved to Tyndall, AFB Florida.

However  the corresponding transfer of F-16 Fighting Falcons from Luke Air Force Base, Ariz. to Holloman will be delayed due to an ongoing freeze on Air Force structure changes, including aircraft transfers.
Posted by Steve Douglass at 5:04 PM No comments:

REUTERS: North Korea has stepped up its military exercises in response to what it regards as "hostile" joint drills by South Korea and the United States after Pyongyang was sanctioned by the U.N. Security Council for a nuclear test in February.

It is not known if North Korea possesses drones, although a report on South Korea's Yonhap news agency last year said that it had obtained 1970s-era U.S. target drones from Syria to develop into attack drones.

"The (drone) planes were assigned the flight route and time with the targets in South Korea in mind, Kim Jong-un said, adding with great satisfaction that they were proved to be able to mount (a) super-precision attack on any enemy targets," KCNA reported.

It is extremely rare for KCNA to specify the day on which Kim attended a drill. It also said that a rocket defense unit had successfully shot down a target that mimicked an "enemy" Tomahawk cruise missile.

North Korea has said it has abrogated an armistice that ended the 1950-53 Korean War and threatened a nuclear attack on the United States.

Although North Korea currently lacks the technology to carry out such an attack, the U.S. said it would deploy anti-missile batteries in Alaska to counter any threat.

The KCNA report said that Kim, 30, the third of his line to rule North Korea, would give orders to destroy military installations in any war zone and also U.S. bases in the Pacific if the North was attacked.

North Korea's missiles have the capacity to hit bases in Japan and on the island of Guam.

Earlier in the day, KCNA denounced U.S. moves that it said were aimed at staging a "pre-emptive nuclear strike" on North Korea, citing the deployment of a U.S. B-52 bomber over the Korean peninsula as well as what it said were nuclear-armed submarines.

The U.S. and South Korea say their drills are defensive.

Tensions have mounted on the Korean peninsula since North Korea staged its first successful long-range rocket launch in December. It followed this up with its third nuclear weapons test in February.

Earlier on Wednesday, China's new leader, Xi Jinping, said he would offer to promote "reconciliation and cooperation" on the Korean peninsula.

Most military experts say that the North will likely not launch an all-out war against South Korea and its U.S. ally due to its outdated weaponry.

Pyongyang is viewed as more likely to stage an attack along a disputed sea border between the two countries as it did in 2010 when it shelled a South Korean island, killing four people.

Such a move would provide a major test for new South Korean President Park Geun-hye who took office pledging closer ties with the North if it abandoned its nuclear push.

(Editing by Nick Macfie)
Posted by Steve Douglass at 6:29 AM No comments: