LAGOS, Nigeria – The United Kingdom is warning its citizens of a "high threat" of a terrorist attack in Nigeria around the Easter holiday.

The Foreign Office issued the updated travel warning Thursday, noting that a radical Islamist sect in Nigeria known as Boko Haram carried out attacks on Christmas Day. A sect-claimed car bombing at a Catholic church outside of Nigeria's capital that day killed at least 44 people.

It offered no further details about the Easter threat.
Boko Haram is waging an increasingly bloody fight against Nigeria's weak central government. The sect's demands include implementation of strict Shariah law and the release of all its detained members.
Posted by Steve Douglass at 2:06 PM No comments:

(CNN) -- A Navy jet crashed Friday into some apartments near Virginia Beach, Virginia, sending flames and thick black smoke into the air, a military spokesman and a witness said.

At least two people were hurt, a hospital spokeswoman said.

The pilot and a person who was on the ground were being treated for injuries, but the nature and extent of those injuries were not immediately clear, the spokeswoman said.
Retired rescue squad member Pat Kavanaugh said he and others found one of the two plane crew members who ejected.

Kavanaugh was on his couch when he heard a loud boom.
"I saw a pilot on the ground with a parachute hanging from the building, with facial lacerations," Kavanaugh said.

Witness watches as Navy jet crashes
"He was in shock and still strapped to his seat," Kavanaugh told CNN affiliate WTKR.
The jet hit the Mayfair Mews Apartment complex in Virginia Beach, according to U.S.

Rep. Scott Rigell's office, whose district includes Virginia Beach.
The jet was from a training squadron at the Naval Air Station Oceana in Virginia Beach, the Navy and Federal Aviation Administration said.

The crew of the two-seater F/A-18 ejected, but their condition wasn't known, a Navy spokesman said.
Virginia Beach Fire Department Battalion Chief Tim Riley said five buildings were heavily damaged, and first responders are going to have to do a detailed search of those buildings for people.
No residents were reported missing early Friday afternoon, Riley said.
But he added: "We're going to assume that there are people missing, and we're going to do a detailed search.

"It's going to take a while to get through there to see the details," Riley told CNN.
The two pilots were taken to the hospital, Riley said.
One resident, Keith Gutkowski, said one of the plane's ejection seats ripped through an oak tree and crashed into his condo fence, and the other crashed into a home next to him.

The plane crash site is 75 yards from his home, and his wife saw the plane "almost fall out of the sky," he said.
"What they're saying about ejecting very late is definitely true," Gutkowski said about reports that the pilots apparently ejected at a low altitude.
"Both ejection seats are right here, and the parachute is right by the crash site," Gutkowski told CNN.

George Pilkington, a witness, said he saw the plane flying low, with its nose up and tail down, ejecting fuel -- which struck him as unusual. The engine was straining, he said.
"It came over the top of my truck emptying fuel," Pilkington said.
"That it didn't cause more damage to the apartment buildings was a blessing," he said.

The plane crashed in an area of apartment complexes and homes a half-mile from the waterfront, Pilkington said.

Black smoke and flames rose from the crash site.
At least one building was damaged, according to video footage from CNN affiliate WTKR. A charred section of the jet wreckage was on the ground nearby.
Fire trucks, ambulances and police cars filled the area as smoke drifted overhead.
Another witness, Zack Zapatero, said the plane crashed into a building occupied by senior citizens. He took photos of the scene.

"There's these large fire balls coming up," Zapatero said. "I was told there was a bunch of senior citizens that live in that building, which worries me a lot.
"Buildings were starting to collapse," he said of the wreckage scene.
"Through the smoke, you could see the end of the plane sitting in the courtyard," Zapatero said
Posted by Steve Douglass at 11:57 AM No comments: 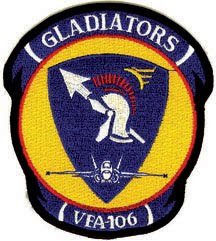 Grazia Moyers, spokeswoman for the Virginia Beach Police Department, said just before 12:30 p.m. what police believe is a military aircraft has gone down.

Commander Rosi with the Navy saID the plane was an F18 Strike fighter VFA 106.


Police are responding to the scene at this time and will assist the military and the State Police, Moyer added.

LISTEN TO LIVE EMERGENCY COMMUNICATIONS FROM THE SCENE HERE

UPDATE: Communications from the scene indicate that an ambulance is transporting the crew "priority one" to a nearby hospital. Their condition is not known. Large structure fire reported at crash scene." 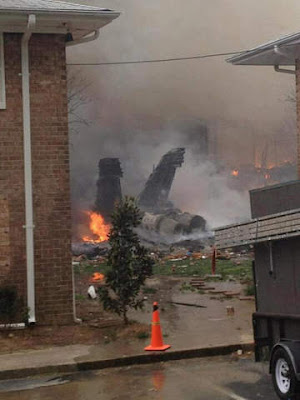 Posted by Steve Douglass at 9:47 AM No comments: