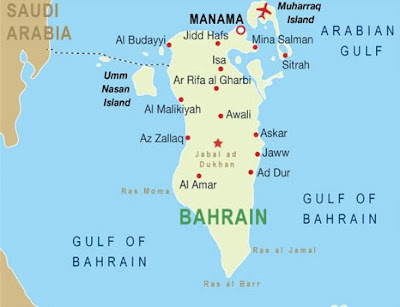 Bahraini authorities have not confirmed the presence of Saudi troops in the archipelago.

But today a Saudi official who requested anonymity confirmed the military intervention, saying that the Gulf Co-operation Council (GCC) had sent in a "special force" following "repeated calls by the Bahraini government for dialogue, which went unanswered" by the republican opposition.

Bahraini opposition groups, which recently united in a tripartite Coalition for a Bahraini Republic to bring down the monarchic regime and establish a democratic system, said today that any military intervention by Saudi Arabia would amount to "a declaration of war and occupation."

As news of the Saudi intervention spread, thousands of opposition supporters swarmed Bahrain's central business district, forcing it to shut down.

On Sunday riot police attacked demonstrators in the Financial Harbour business complex, injuring over 200 and rattling the Western banking and financial outfits that use Bahrain as their Gulf hub.

The involvement of foreign troops in the intensifying military clampdown is certain to further polarise the strategic island kingdom, which is home to the Obama administration's main military lever against Iran, the US navy's 5th Fleet.

Bahrain's leadership is under intense pressure not to give ground to the opposition from other Western-backed ruling dynasties in the Gulf who are fearful of a democratic domino effect.

On Sunday, Bahrain's Crown Prince Salman bin Hamad Al Khalifa suggested that authorities were gearing up for a showdown with democratic forces.

He said "the right to security and safety is above all else" in the kingdom.

"Any legitimate claims must not be made at the expense of security and stability," the prince said in a televised speech.

The British and US governments have issued notices urging their nationals in Bahrain to remain at home or try to avoid protest areas when travelling.

"Spontaneous demonstrations and violence are expected throughout the next several days," the US advisory warned.

UPDATE: Bahrain–Eyewitnesses have reported seeing an estimated 30 tanks being transported into Bahrain from Saudi Arabia on Monday night at around 6:45pm local time. The tanks were sighted along the King Fahd causeway, which links the small island-nation of Bahrain to Saudi Arabia.

Commuters traveling along the 25-km causeway were held up due to the presence of “15 tank carriers carrying two tanks each heading towards Bahrain.” Civilian eyewitnesses could not, however, confirm whether the tanks belonged to the Saudi military.
The presence of Saudi military hardware in Bahrain is considered highly unusual.

The development comes on the eve of yet another scheduled anti-government demonstration organized by the Bahraini opposition and protesters in Manama’s Pearl Roundabout.
Fears of Saudi intervention in the ongoing Bahraini uprising first came to the fore last week when unconfirmed reports emerged on Wednesday that Saudi officials had told US authorities that they were “prepared to intervene” in Bahrain should such a move prove necessary to protect Bahrain’s embattled government.

Tomorrow’s mass protest will be the first to take place since the arrival to the country of controversial Shia opposition leader Hassan Mosheima from self-imposed exile.

Mosheima arrived on Saturday, using his first speech to call for national unity and to urge protesters to step up demands for the ouster of Bahrain’s prime minister of 40 years, Sheikh Khalifa Al Khalifa.


UPDATE: A military force from Saudi Arabia and other Gulf nations moved into Bahrain on Monday to shore up the nation's Sunni rulers in the face of escalating Shiite-led protests seeking to break the monarchy's hold on power.

The force marked the first cross-border military operation to quell unrest since the Arab world's rebellions began in December.

Bahrain's main opposition groups immediately denounced the outside intervention as an "occupation" that pushed the tiny Gulf kingdom dangerously close to a state of war.

The Gulf Sunni dynasties are fearful for their own fate as the Arab push for change rumbles through the oil-rich region. They also see any gains by Bahrain's Shiites as a potential foothold for Shiite heavyweight Iran to increase influence, including with Saudi Arabia's restive Shiite minority in areas just over the causeway from the island of Bahrain.

"The Bahrain government asked us yesterday to look at ways to help them to defuse tension in Bahrain," United Arab Emirates Foreign Minister Abdullah bin Zayed Al-Nahyan said in Paris. He said they sent 500 Emirati police and the Saudis and others also sent forces "to get calm and order in Bahrain."

The strife in Bahrain escalated dramatically over the weekend, just as U.S. Defense Secretary Robert Gates arrived to urge its leaders — key Washington allies — to heed at least some of the demands for change.

A Saudi security official said the Gulf units dispatched to Bahrain come from a special force within the six-nation Gulf Cooperation Council. He did not give details on the size or national breakdown of the force — estimated in some reports at about 1,000 strong — but said they were deployed by air and road and will help protect key buildings in the strategic nation, which hosts the U.S. Navy's 5th Fleet.

The official spoke on condition of anonymity because he was not authorized to brief media. The GCC members are Bahrain, Saudi Arabia, Kuwait, Qatar, Oman and the United Arab Emirates.

The Gulf Daily News, which is close to Bahrain's rulers, said the outside forces would protect sites such as electricity stations and oil facilities.

The arrival of the military force comes a day after some of the most widespread chaos in the monthlong series of protests and clashes that have left seven dead and the nation deeply divided. On Sunday, protesters blocked the main route to Bahrain's important financial district and battled pro-government mobs at the main university, which has canceled classed indefinitely.

A group of pro-government lawmakers Monday urged Bahrain's king to impose martial law and claimed "extremist movements" were trying to disrupt the country and push it toward sectarian conflict.

A coalition of seven Shiite-led opposition factions pledged to demand a U.N. investigation into the Gulf leaders' decision to send in the special force for an internal conflict. The unit had been deployed in the past to Kuwait, including during the 1991 U.S.-led campaign to drive out Saddam Hussein's troops and before the 2003 invasion of Iraq.

"We consider that any military force or military equipment crossing the boundaries of Bahrain — from air, sea or land — an occupation and a conspiracy against the people of Bahrain," said a statement from the opposition groups.

There was no immediate indication how protesters would respond, nor was there public comment from Bahrain's monarch, but leaders have expressed increasing frustration that opposition groups have not accepted offers to open dialogue aimed at resolving the crisis.

In a series of Twitter messages, Bahrain's prime minister, Sheik Khalifa bin Salman Al Khalifa, lashed out at the Shiite-led protesters. "What we are witnessing in Manama is no peaceful protest," he wrote. "It's wanton, gangster style takeover of people's lives."

Shiites, who account for 70 percent of the population, have long complained of systematic discrimination by the Sunni dynasty that has ruled for more than two centuries.

The grievances include allegations of being blackballed from key government and security posts. They also strongly object to government policies that give citizenship and jobs to Sunnis from other Arab countries and South Asia as a way to offset the Shiites' demographic edge.

The main opposition groups have called for the Sunni rulers to give up most of their powers to the elected parliament. But, as violence has deepened, many protesters now say they want to topple the entire royal family.
Posted by Steve Douglass at 12:29 PM No comments: 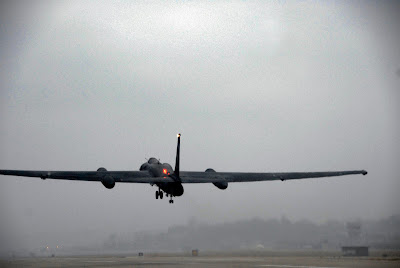 3/13/2011 - OSAN AIR BASE, Republic of Korea -- As Japan copes with the aftermath of the 8.9 magnitude earthquake and tsunami that struck March 11, the United States has sent help in the form of personnel, equipment and a watchful eye in the sky -- a U-2 "Dragonlady" from the 5th Reconnaissance Squadron here.

In conjunction with an RQ-4 Global Hawk remotely piloted aircraft from the 9th Operations Group Detachment 3, Andersen AFB Guam, the U-2 has been deployed to capture high-resolution, broad-area synoptic imagery, by utilizing an optical bar camera producing traditional film products which are developed and analyzed after landing

Once the aircraft returns with the film, it will be shipped to Beale Air Force Base, Calif., where the 9th Intelligence Squadron will process and analyze the 10,500 feet of film.

"The broad, synoptic collection of large land mass and littorals are of great benefit to decision makers," Lt. Col. Spencer Thomas, 5th RS commander said. "It will aid them in determining locations and extent of damage the earthquake and tsunami have left."

Colonel Thomas also said the imagery can be likened to that of a medical injury.

"It's like a personal injury; immediately after the event, one must determine where and how they have been injured," he said. "Our mission serves that function."

From start to finish, the mission is expected to take four to five days. Colonel Thomas said once they were notified, it took about 12 hours of planning and preparation to get the plane off the ground.

Staff Sgt. William Ehinger, a U-2 dedicated crew chief with the 5th RS, led his team quickly to ensure the aircraft was ready to launch.

"I am proud to be part of the humanitarian mission to help our Allies," he said. "In fact, all Airmen in the 5th RS are proud to be helping out to provide the data Japan needs to rebuild their country."

Because the aircraft flies at such a high altitude - more than 70,000 feet - the U-2 pilot must wear a full pressure suit similar to those worn by astronauts. This process of preparing the pilot takes a couple hours to complete.

The upload of the camera, which is much larger than a typical camera, weighs in at around 300 pounds, with the film weighing more than 120 pounds. Six hours later, the aircraft has been prepared.

"These kinds of missions require much, much more than a pilot, an aircraft and a sensor," Colonel Thomas said. "The extended teamwork associated with this sort of effort reaches across multiple squadrons."

During this humanitarian assistance and disaster relief mission, Colonel Thomas said everyone involved was keenly focused on the task at hand, as they are in any mission.

"It's an extended network of Airmen, Americans, reaching out to assist our friends and allies in Japan," he said. "They're our friends and we're going to do whatever we can to help them."
Posted by Steve Douglass at 5:13 AM No comments:

No further contamination was detected after the crew members washed with soap and water, the Navy said.

In addition, the Navy said the U.S. 7th Fleet has temporarily repositioned its ships and planes away from the Fukushima Daiichi nuclear power plant after detecting low level contamination in the air and on its planes in the area, the Navy said.

One ship was operating about 100 miles northeast of the power plant when "airborne radioactivity" was detected, the Navy said.

The Navy's statement, however, provided some perspective, noting that the maximum potential radiation dose received by ship personnel when it passed through the area was "less than the radiation exposure received from about one month of exposure to natural background radiation from sources such as rocks, soil, and the sun."

Eight U.S. and Japanese helicopters were used to distribute the pallets, according to Sgt. Maj. Stephen Valley of U.S. Forces Japan.

Workers are scrambling to cool down fuel rods and prevent a full meltdown in three reactors at the earthquake-hit plant.

Radioactive steam has been released intentionally to lessen growing pressure in the reactors.
Posted by Steve Douglass at 5:07 AM No comments: