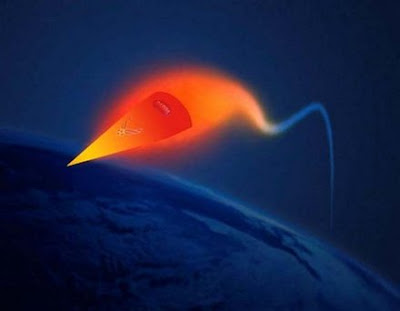 
VANDENBERG AIR FORCE BASE, Calif. — The Air Force has launched an experimental hypersonic glider able to travel more than 4,000 miles in 30 minutes over the Pacific Ocean.

The 30th Space Wing at Vandenberg Air Force Base says a Minotaur 4 rocket carrying the glider blasted off Thursday afternoon from the central California coast. The Air Force statement does not reveal the result of the test involving the Falcon Hypersonic Technology Vehicle 2.

A fact sheet from the Defense Advanced Research Projects Agency says the vehicle was to be accelerated into the upper atmosphere, separate from its booster and glide across the Pacific at 13,000 mph.

Thirty minutes and 4,100 miles later it was to crash and sink near Kwajalein Atoll, some 2,100 miles southwest of Hawaii.

Related ARES Link: Is the XB-37 and Hypersonic Glider in kahootz?
Posted by Steve Douglass at 8:03 PM No comments: