Posted by Steve Douglass at 9:15 PM No comments: 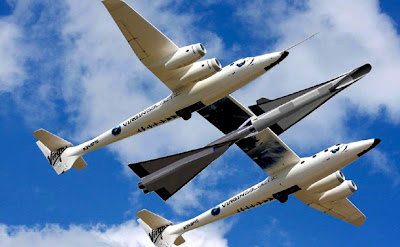 Growing interest in small satellites and, just as important, the problem of how to launch them affordably, could provide hypersonic system developers with a long-awaited first step on the way to reusable, routine access to space.
Piece by piece, parts of the puzzle that may conceivably drive down costs to as low as $300,000 per launch, are falling into place, according to hypersonic researchers at Boeing. Building on these pieces, the company has unveiled a small launch vehicle (SLV) concept aimed at the smallsat market, and it could be in service as early as 2020.

Unlike many previous ideas for air-breathing, multi-stage small launch systems, the SLV comprises elements that, in some cases, are already flying. Including the Scaled Composites-designed WhiteKnightTwo (WK2) carrier aircraft that would air-launch the three-stage vehicle, virtually every technology required for the SLV is therefore either developed or at a high-technology readiness level, says Kevin Bowcutt, Boeing's chief hypersonics scientist. Sized initially to carry payloads up to 100 lb., the SLV would employ two reusable air-breathing stages and a third stage made up of an expendable or reusable rocket.

“The cost of launching small satellites is three to ten times that of larger payloads, so is there any way of bringing it down? There are two main things I've learned: First, to get the cost down, you cannot throw away the hardware—throw away little or none, if possible. Second, you need a high utility rate. To get costs down to $300,000 or less per launch that vehicle must fly 100 to 150 times per year,” says Bowcutt.

The downward trend in satellite size, emergence of fractionated satellites and the low cost of on-demand launch capability itself will encourage market growth, Bowcutt asserts. Potential drivers include the delivery of small payloads to orbital outposts such as the International Space Station or Bigelow space habitats, as well as evolving markets ranging from on-demand tactical reconnaissance and weather monitoring to satellite servicing and space debris deorbiting.
Measuring almost 75 ft. in length and weighing slightly less than 25,000 lb., the SLV stack is nominally sized to be carried beneath the WK2 in the same way as the Virgin Galactic SpaceShipTwo. Like the Orbital Sciences L-1011 launcher, the carrier aircraft can take the SLV to an “optimal launch location,” says Bowcutt. Benefits include flexible basing and getting around any weather issues at launch, he notes.

The delta-winged first stage borrows several design features of the XB-70 supersonic bomber, including a raised forward fuselage, two-dimensional mixed-compression wedge inlets and compression lift. Boeing's study evaluated several propulsion options for the first stage, which is designed to reach a staging Mach number of 4.5 before releasing the second stage. Options include the Atrex air-turbo ramjet with expander cycle, an experimental precooled engine under development by the Japan Aerospace Exploration Agency that works as both a turbojet and ramjet.

READ THE REST OF THE STORY AT AVIATION WEEK