Aerospace experts scrutinizing images of the Chinese J-20 fighter that first began appearing on the internet in late December have developed a more nuanced view of the plane's features than what was available in early reports.

Although the J-20 resembles the outline of the stealthy F-22 Raptor when viewed head-on in its forward aspect, the plane clearly lacks many of the features that make Raptor the most capable air-to-air combat system in history. On the other hand, these same experts believe that over time the Peoples Liberation Army Air Force can evolve the J-20 into a formidable combat aircraft -- especially given the fact that it is expected to operate in or near Chinese airspace, where it will greatly outnumber any attacker's planes.

Early reports that the J-20 exceeds 70 feet in length appear to be wrong. By comparing the scale of the aircraft with adjacent reference objects whose dimensions are known, experts have determined that the fighter is 62 feet long -- the same length as the F-22, and not much different from the 64 feet of the F-15C fighter. Based on overhead imagery and other inputs, wingspan looks to be about 41 feet, also similar to F-22 (45 feet) and F-15C (43 feet). However, the wing area of roughly 630 square feet much more closely resembles the 608 square feet of the F-15C than the 840 square feet on the F-22; this matters a great deal in terms of range since fuel is stored in wing areas.

The J-20 does not have the supercruise feature of the F-22 that allows the latter plane to fly at high speed without consuming excessive amounts of fuel, which puts the J-20 at a decided disadvantage given that it carries about 25 percent less fuel internally than the F-22. It also does not have the vectored thrust of the F-22 that provides enhanced aerial agility; the Chinese appear to have modified the fixed exhaust nozzles on the J-20 with an eye to misleading western observers concerning how capable the propulsion system is.

The J-20 airframe incorporates extensive low-observable (stealth) technology into its forward aspect, although it is more readily tracked from side and rear angles. However, even in the forward aspect some design features such as the engine inlets appear sub-optimized for reduction of radar cross-section. It is not clear how extensively designers have used radar-absorbing materials. It is also not clear what kinds of on-board electronics the J-20 will eventually carry in its operational configuration. Electronic sensors, processors and datalinks are the heart of the F-35 Joint Strike Fighter, greatly surpassing the performance of even those on the F-22.

While the J-20 superficially resembles fifth-generation fighters such as the F-22 and F-35, experts do not believe Chinese designers will be able to produce an airframe that comes close to matching the maneuverability, survivability, lethality or situational awareness of an F-22 or F-35.

However, they may not need to if they can lure enemy fighters into Chinese airspace where they have other "home court" advantages. (ends)
Posted by Steve Douglass at 10:00 AM 2 comments:

Shuttle lands for last time - No more Discovery in space.

After (a total) of 365 days in orbit and 148 million space miles logged -Discovery is home for good.
Posted by Steve Douglass at 9:02 AM No comments: 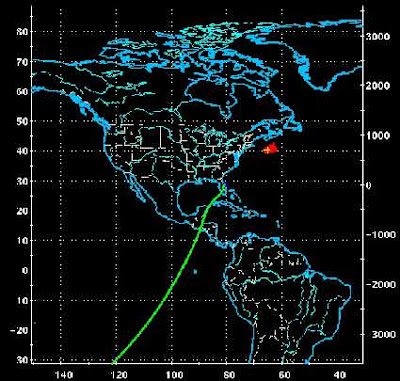 Space shuttle Discovery’s payload bay doors are closed and everything continues to proceed on schedule for this morning’s landing attempt.

Weather currently is both forecast and observed “go.” Astronaut Rick Sturckow is flying weather reconnaissance at Kennedy Space Center, where winds are forecast to be high, but within limits for runway 15. Sturckow will fly runway approaches to assess conditions for Discovery’s landing. The winds from the southeast (130 degrees) are forecast to be 15 knots, peaking to 23 knots, providing a 10 knot crosswind and 21 knot headwind.