Have you flown a FORD lately? 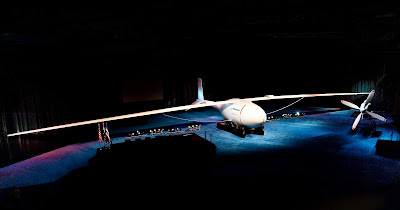 US aerospace mammoth Boeing yesterday rolled out its "Phantom Eye" unmanned strato-plane, able to cruise high above the airlanes for up to four days - powered by two ordinary Ford car engines running on hydrogen.

"The program is moving quickly, and it’s exciting to be part of such a unique aircraft," said Drew Mallow, Phantom Eye program manager, in a statement issued yesterday. "The hydrogen propulsion system will be the key to Phantom Eye's success. It is very efficient and offers great fuel economy, and its only byproduct is water, so it's also a 'green' aircraft."

To be specific, the Phantom Eye uses 2.3 litre four-cylinder engines of a type normally found in some models of petrol-burning Ford Fusion, turbocharged and tweaked so as to run on hydrogen at 65,000 feet.

Four days would suggest pretty good fuel economy, right enough. However "green" is a bit of a stretch as hydrogen at the moment is normally made by reforming natural gas. This releases copious amounts of carbon into the atmosphere - usually more than one would generate by running an ordinary fossil-fuelled car engine - so it is hardly green*.

One might also quibble with the "moving quickly" description of Phantom Eye. True, Boeing announced that it would start work on the Eye only in March, which would suggest impressive speed by the Phantom Works engineers.

In fact, however, the company has been touting Ford-powered high altitude drones for several years now. Indeed, back in 2007 it managed to get some military development cash for the previous "Orion" single-engined version, which could also stay up for four days. At that time, Boeing considered that a twin-engined job along Phantom Eye lines would be good for 10 days, not four - though the firm seems to have walked back on that somewhat.

Phantom Eye, then, hasn't appeared with lightning swiftness: though one might excuse the Phantom Works engineers for that. The event which actually got the ball rolling again on the Phantom Eye was Boeing's decision to provide development cash itself, having failed to get any from government customers. Lately, companies such as General Atomics have won a lot of government UAV business by offering finished products rather than insisting on taxpayers furnishing development money up front.

The next move for Phantom Eye is shipment to NASA’s Dryden Flight Research Center at Edwards Air Force Base in California. It's expected to make its first flight next year. 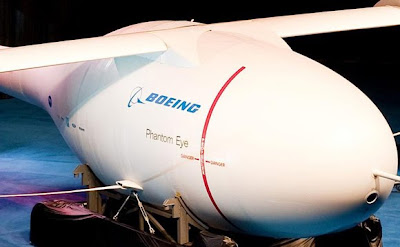 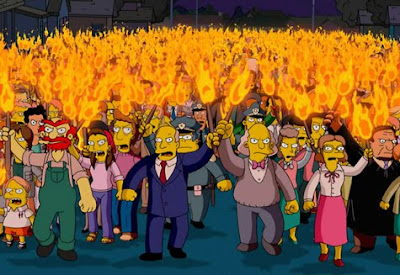 Kabul, Afghanistan (CNN) -- Villagers in eastern Afghanistan repelled an insurgent attack Tuesday, an incident that left an Afghan civilian and "numerous" Taliban dead, the NATO-led command said.
The incident took place in Ghazni province, where Taliban fighters tried to attack the village of Aalai Shahea. After unsuccessful attempts to overpower the village, they were "met with effective resistance" by its residents and quickly left the scene, NATO's International Security Assistance Force said in a statement.

The event is one in a series of examples of villagers withstanding and repelling insurgent attacks, including the successful defense of a village in the Gizab district in southeast Afghanistan in April that resulted in several insurgent deaths and four arrests, the statement said.

The insurgents traveled from neighboring Uruzgan province to conduct Tuesday's attack on the village, which is largely populated by Afghan security forces and their families, ISAF said.
"Attacking local people in their houses and villages demonstrates how desperate the Taliban have become in their failing operations to terrorize the Afghan people, and today the villagers fought back and won," said Maj. Paul Oliver, a military spokesman.
Posted by Steve Douglass at 9:21 PM No comments: Links to this post 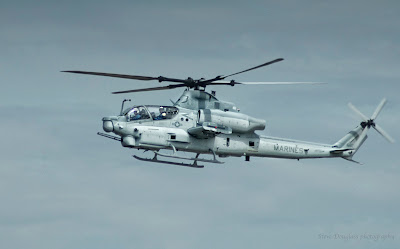 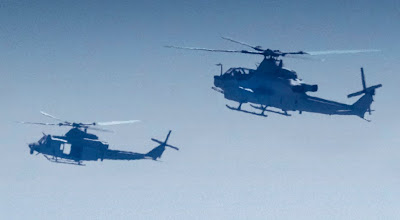 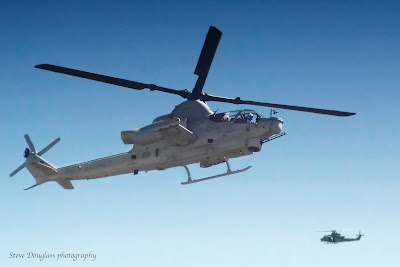 Captured these two new helicopters (Cobra AH1Z and UH-1Y) coming in after a test flight today (here in Amarillo) to the Bell/Textron plant. 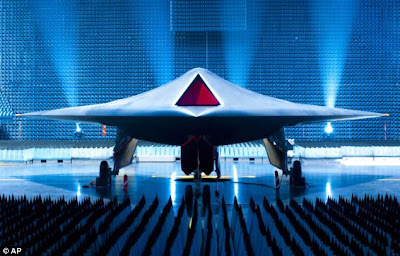 Looming ominously like a space ship from Star Wars, this is the future of unmanned flight.

The Taranis, named after the Celtic god of thunder, is about the same size as a Hawk jet and is equipped with stealth equipment and an 'autonomous' artificial intelligence system.

The plane will test the possibility of developing the first ever autonomous stealthy Unmanned Combat Air Vehicle (UCAV) that would ultimately be capable of precisely striking targets at long range, even in another continent.


Taranis, the prototype of an unmanned combat aircraft of the future, which was unveiled today

The trial aircraft cost £143 million pounds to construct and spearheads BAE's drive to convince the Ministry of Defence to invest in the next generation of unmanned aircraft.

Almost invisible to ground radar, it is designed to travel at high jet speeds and cover massive distances between continents.

The plane is built to carry out intelligence, surveillance and reconnaissance on enemy territory using onboard sensors.

And it has been designed to carry a cache of weapons - including bombs and missiles -, giving it a potential long-range strike capability.

It can be controlled from anywhere in the world with satellite communications.

Experts say the cutting-edge design is at the forefront of world technology and as advanced as any US development.

The plane began development in December 2006, and is intended to prove the UK's ability to produce a stealthy UAV.

Taranis will be stealthy, fast, able to carry out use a number of on-board weapons systems and be able to defend itself against manned and other unmanned enemy aircraft.


The concept demonstrator will test the possibility of developing the first ever autonomous stealthy Unmanned Combat Air Vehicle (UCAV) that would ultimately be capable of precisely striking targets at long range, even in another continent

Any future need hinges on the outcome of the Strategic Defence and Security Review, which will conclude around October.

'The first of its kind in the UK, it reflects the best of our nation’s advanced design and technology skills and is a leading programme on the global stage.'

Taranis is an informal partnership of the UK MoD and industry British engineering firms including BAE Systems, Rolls Royce, QinetiQ and GE Aviation.

Rolls-Royce will focus on the next generation propulsion system for the Taranis demonstrator.

Speaking on behalf of the industry team, Nigel Whitehead, Group managing director of BAE Systems' Programmes & Support business, said: 'Taranis has been three and a half years in the making and is the product of more than a million man-hours.

'It represents a significant step forward in this country's fast-jet capability. This technology is key to sustaining a strong industrial base and to maintain the UK's leading position as a centre for engineering excellence and innovation."

The Taranis prototype will provide the MOD with knowledge on the technical and manufacturing challenges and the potential capabilities of Unmanned Combat Air Systems.

Test flights for the Taranis plane are due to start in 2011.
Posted by Steve Douglass at 12:58 PM No comments: Links to this post

Defective Defector Wants To Go Back to Iran

Editors note: Mr Amir thinks he'll be greeted with open arms by the Iranian government if he returns to Iran. Most likely he will be - but one of them will be holding an axe. It's a fact he revealed the existence of several secret Iranian nuclear facilities.

A missing Iranian nuclear scientist, who Tehran says was kidnapped a year ago by the CIA, has taken refuge in the Iran section of Pakistan's US embassy.

A spokesman from Pakistan's Foreign Office, Abdul Basit, told the BBC that Shahram Amiri was seeking immediate repatriation to Iran.

In June videos purportedly of Mr Amiri but containing contradictory information on his whereabouts emerged.

The US rejected Tehran's claims that it was behind Mr Amiri's disappearance.

Iranian media say Mr Amiri worked as a researcher at a university in Tehran, but some reports say he worked for the country's atomic energy organisation and had in-depth knowledge of its controversial nuclear programme.


Two videos supposedly showing Shahram Amiri emerged on 8 June
ABC News reported in March that he had defected and was helping the CIA, revealing valuable information about the Iranian nuclear programme.

But earlier this month, Tehran said it had proof he was being held in the US.

The allegation came after three videos purportedly of Mr Amiri emerged - the first said he had been kidnapped, the second that he was living freely in Arizona, and the third that he had escaped from his captors.

The BBC's former correspondent in Tehran, Jon Leyne, says that Iran's version of the story seems to be backed up by events unfolding in Washington DC.

Our correspondent says Mr Amiri's sudden appearance is a major embarrassment for the American spy agencies and could lead to a diplomatic stand-off.

There are two diametrically opposed versions of the Shahram Amiri story. Iran says he was kidnapped. American sources said that he defected and was spilling the beans on the Iranian nuclear programme.

On the face of it, the Iranian version now sounds a lot more credible. However those inclined to give the US the benefit of the doubt will point out that it is still conceivable that Mr Amiri was persuaded, blackmailed, or even conceivably kidnapped by the Iranians themselves back into their hands.

Either way this is a big embarrassment for the American spy agencies, who have let slip a man they had been building up as a major catch.

Profile: Shahram Amiri
According to Mr Basit in Pakistan, the head of Iran's interest section, Dr Mostafa Rahmani, is planning to repatriate the scientist back to his country.

But while US authorities cannot enter Iran's diplomatic premises, they could prevent Mr Amiri leaving.

The Iran interest section is part of Pakistan's embassy in Washington, but run by Iranians. The US cut diplomatic relations with Iran shortly after the 1979 Islamic Revolution.

Iranian state radio has reported that Mr Amiri said in a telephone interview from inside the embassy that the US government had wanted to quietly return him to Iran using another country's airline and in doing so "cover up this abduction".

"After my comments were released on the internet, the Americans realised that they were the losers of this game," he was quoted as having said.

Mr Amiri went missing a year ago while on pilgrimage in Saudi Arabia.

In the first, initially broadcast by Iranian television, a man purporting to be Mr Amiri says he was kidnapped by the US while on pilgrimage in the Saudi Arabian city of Medina and that he is now living in the US state of Arizona.

At the time the Iranian government described the video as evidence that he was being held in the US against his will.

In the second, posted hours later on YouTube, a similar-looking man claiming to be the scientist says he is happy in the US, living in freedom and safety.

In the third video, which was broadcast by Iranian state TV on 29 June, a man claiming to be the missing scientist says: "I, Shahram Amiri, am a national of the Islamic Republic of Iran and a few minutes ago I succeeded in escaping US security agents in Virginia.


In the most recent video the man claims to have escaped US custody
"Presently, I am producing this video in a safe place. I could be rearrested at any time."

The man in the video also dismisses the second recording, in which it was claimed that the scientist was living freely in the US, as "a complete fabrication".

"I am not free here and I am not permitted to contact my family. If something happens and I do not return home alive, the US government will be responsible."

The video finishes with the man urging Iranian officials and human rights organisations to "put pressure on the US government for my release and return".

"I was not prepared to betray my country under any kind of threats or bribery by the US government," he adds.
Posted by Steve Douglass at 6:01 AM No comments: Links to this post