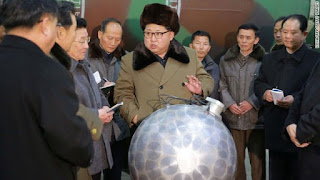 The assessment has yet to become a formal consensus view of the U.S. government. But it reveals just how far along many in the U.S. believe the reclusive country has come to gaining a nuclear-tipped ballistic missile that could potentially strike the U.S.

As North Korean leader Kim Jong Un’s public rhetoric has escalated in recent weeks, concern has grown inside intelligence circles that he has made progress on several fronts.

“He is determined to prove his doubters wrong,” one U.S. official told CNN, even as uncertainty remains about how much progress he has actually made in his quest for nuclear missiles.

Recent photos showing Kim standing next to what the North Koreans claim is a miniaturized nuclear device are still being scrutinized by U.S. analysts for any indication of progress, officials said, declining to provide additional specifics.

U.S. officials who endorse the notion that Kim probably has a nuclear warhead still note that they don’t know if the device would actually work. The North Koreans believe it would.

U.S. commanders have said they assume for war planning purposes that North Korea has a functional warhead but have stopped short of outright declaring it exists.

“It’s the prudent decision on my part to assume that he has the capability to miniaturize a nuclear weapon and put it on an ICBM,” Adm. William Gortney, head of U.S. Northern Command, recently told Congress.

But the Pentagon has taken pains to downplay the possibility.

Pentagon Press Secretary Peter Cook acknowledged that “the commanders who are responsible for these activities” are “doing the prudent, appropriate, proper” thing by assuming the North Koreans possess this capability.

But he said that this operational assumption “does not mean that they have that capability. They’ve not demonstrated that.”

At the same time, the U.S. believes North Korea is making progress in testing an advanced version of its KN-08 intercontinental ballistic missile.

North Korean state media released photos of Kim inspecting a test of a new solid-fuel rocket engine, a key component of the KN-08 missile. The U.S. officials have seen pictures and for now don’t have reason to doubt their authenticity.

Experts immediately cast doubt on North Korea’s claim that it has developed a nuclear bomb small enough to fit into a warhead, saying that even if the boast is true, the country probably still has a lot of work ahead to be able to deliver it effectively.

Pyongyang splashed the news via its two main media outlets, showing leader Kim Jong Un — looking chubbier than usual in a fur hat and long coat — inspecting the silver globe that purportedly contained the bomb. A green-and-brown camouflage missile sat in the background.

The two-pronged message seemed clear: “Mess with us and this is what you’ll get,” to the outside world, and “Don’t ever question that I’m in charge,” to his populace in general and the military in particular, which reportedly has yet to completely accept the youthful grandson of the country’s founding father.

The announcement came on the second day of annual spring exercises between South Korean and U.S. forces, which have been described as the largest ever. The drills always anger Pyongyang, which calls them a rehearsal for invasion. South Korean media have fed the paranoia this year with claims that they include scenarios for destroying the North’s nuclear facilities and taking out its leadership.

It was also the latest salvo in the steadily escalating crisis on the peninsula, which started with the North’s fourth nuclear test on Jan. 6 and a multistage rocket launch a month later. The crisis has included high-profile shows of U.S. force, the shutting down of a joint South/North Korean factory complex, and more recently, Pyongyang threatening to turn South Korea, the U.S. mainland and U.S. bases in the Pacific into a “sea of fire.”

Yet, despite new, tougher U.N. Security Council sanctions over its nuclear and ballistic missile programs, the impoverished North has proceeded with them at full speed. It has said its rockets are part of a peaceful space program and claims the nuclear weapons are solely for self-defense, despite its threats to use them in a pre-emptive attack.

“The nuclear warheads have been standardized to be fit for ballistic missiles by miniaturizing them,” the official Korean Central News Agency quoted Kim as telling a meeting of scientists and technicians. “This can be called true nuclear deterrent.”

Pyongyang’s claim came just hours after U.S. Air Force Chief of Staff Gen. Mark Welsh told a Pentagon briefing that the North isn’t believed to have developed the ability yet to miniaturize a nuclear bomb enough to fit into a warhead.

Welsh said the commander of U.S. Northern Command “spends a lot of time worried about how we can be sure to take it out if they ever did develop the capability to combine a long-range missile with a warhead that was operable. I don’t think they’re at that stage yet.”

Even if the North has developed a small enough bomb, other questions remain, particularly whether it could withstand the rigors of takeoff and re-entry into the atmosphere, and how accurate and reliable the missiles are, given they have been tested only twice. Devastating retaliation would be certain.

“If you can’t put it on a missile, you can’t do much with it,” said Carl Baker, a Korea expert at the Pacific Forum CSIS think tank in Honolulu. “And there’s no indication whatsoever that they’ve been able to weaponize a nuclear weapon that they could put on an intercontinental missile. Satellite launches don’t prove that. It doesn’t prove you can launch an ICBM. It doesn’t prove you can put that kind of weight on that kind of rocket.”

Baker said he sees the claim as yet another attempt by the rogue regime to claim success so “they can be part of the club.”