North Korean Jet Fighter Crash May Have Been Defection 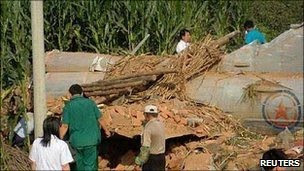 A North Korean aircraft, which may be a fighter jet, has crashed in China near the country's shared border, say Chinese and South Korean reports.

It is believed the pilot, who was killed, may have been trying to defect to Russia, according to unnamed intelligence sources cited by Yonhap.

Defections are common but an attempt by plane is highly unusual and would be a source of embarrassment for Pyongyang.

China has a repatriation agreement with North Korea, which could explain why the pilot may have been trying to reach Russia, the report added.

North Korea has a military airbase in Sinuiju, near the border with China.

China's state media confirmed an unidentified small plane had crashed and that it may belong to North Korea.

An investigation into the cause of the crash was under way, Xinhua reported.

Soviet-era jet
Photographs of the wreckage reportedly taken by a local resident and posted on the internet showed a North Korean flag on the plane's tail.


Military experts said the plane appeared to be a Soviet-era fighter jet, which were used during the 1950-53 Korean War.

A report in Hong Kong's Ming Pao newspaper said that a second pilot had bailed out but gave no information on his whereabouts. It conflicts with the South Korean report of only one pilot on board.

Technically, North and South Korea remain at war although a ceasefire agreement ended fighting in 1953.

Their border is the most heavily militarised zone in the world.
Posted by Steve Douglass at 5:44 AM No comments: