Most Powerful Nuke Being Dismantled Today 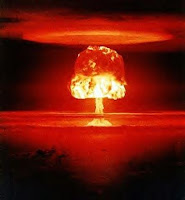 AMARILLO, Texas (AP) — The last of the nation's most powerful nuclear bombs — a weapon hundreds of times stronger than the bomb dropped on Hiroshima — is being disassembled nearly half a century after it was put into service at the height of the Cold War.

The final components of the B53 bomb will be broken down today at the Pantex Plant near Amarillo, the nation's only nuclear weapons assembly and disassembly facility. The completion of the dismantling program is a year ahead of schedule, according to the U.S. Department of Energy's National Nuclear Security Administration, and aligns with President Barack Obama's goal of reducing the number of nuclear weapons.
Thomas D'Agostino, the nuclear administration's chief, called the bomb's elimination a "significant milestone."

First put into service in 1962, when Cold War tensions peaked during the Cuban Missile Crisis, the B53 weighed 10,000 pounds and was the size of a minivan. According to the American Federation of Scientists, it was 600 times more powerful than the atomic bomb dropped on Hiroshima, Japan, at the end of World War II.

The B53 was designed to destroy facilities deep underground, and it was carried by B-52 bombers.

Since it was made using older technology by engineers who have since retired or died, developing a disassembly process took time. Engineers had to develop complex tools and new procedures to ensure safety.

"We knew going in that this was going to be a challenging project, and we put together an outstanding team with all of our partners to develop a way to achieve this objective safely and efficiently," said John Woolery, the plant's general manager.

Many of the B53s were disassembled in the 1980s, but a significant number remained in the U.S. arsenal until they were retired from the stockpile in 1997. Pantex spokesman Greg Cunningham said he couldn't comment on how many of the bombs have been disassembled at the Texas plant.

The weapon is considered dismantled when the roughly 300 pounds of high explosives inside are separated from the special nuclear material, known as the pit. The uranium pits from bombs dismantled at Pantex will be stored on an interim basis at the plant, Cunningham said.

The material and components are then processed, which includes sanitizing, recycling and disposal, the National Nuclear Security Administration said last fall when it announced the Texas plant's role in the B53 dismantling.

The plant will play a large role in similar projects as older weapons are retired from the U.S.'s nuclear arsenal.
Posted by Steve Douglass at 8:01 AM No comments:

ALAMO, Nev. — An Air Force fighter jet crashed in a sparsely populated part of southern Nevada on Monday, but the pilot was able to eject from the aircraft and didn’t suffer any injuries, authorities said.

Lincoln County Sheriff Kerry Lee said a citizen reported seeing a large explosion and fireball west of U.S. Highway 93 shortly after 4 p.m. Deputies made their way over rough terrain and through a ranch toward the plume of smoke about five miles from the highway, he said.

“It was out in the desert, really hard to get to,” Lee said. When deputies arrived, they found a debris field about 100 yards long.

“It didn’t look like the plane slammed into the ground,” the sheriff said. “There was a lot of the plane left, but it burned up.”

The pilot had started walking and was picked up by a military helicopter about 30 minutes after the crash, Lee said. He was flown to Mike O’Callaghan Federal Hospital near Las Vegas for an examination that revealed no injuries, Lustig said.
Posted by Steve Douglass at 5:51 AM No comments: