A veteran stealth hunter answers a plea from our favorite covert base.

PLEASE NOTE: This article is in error but I have decided to keep it posted anyway. In my haste to answer a plea to protect a program from being buried in the black world forever, I didn't take the time to double check my sources. As a result there are major errors in the original story. Some of the info is valid. However, I have redacted the information that was not accurate. I will amend this report at a future date.

On a moonless night a secret stealth aircraft took off from Area 51 for the last time. There was no covert spy mission planned for “the article.”

It didn’t fly over North Korea, Iran or even Pakistan. Instead it took a clandestine tour of America, soaring high over sleeping cities and placid farmland unheard and unnoticed, even by civil air traffic controllers, totally unaware a secret aircraft was winging its way through their controlled airspace.

Only a handful of people knew about the flight or about the aircraft’s existence for that matter. The mystery aircraft has been flying out of Area 51 and other forward bases since the early 90s and is still one of best kept-military aviation secrets because it’s a spy platform.

Those on the need to know list were aware of the flight and gathered at isolated military contractor facilities across the Southwest United States.

They stood out in the cold huddled together waiting for XXXXXX farewell flyby. Without fanfare it flies slowly past in review over a select cadre of those who built her.

Boldly, it makes two slow and passes over a facility located inside a major city but is only seen by those who were meant to.

It’s not a huge risk because that’s what XXXXX was built to do, was to loiter and collect data -  invisibly.

There is muted applause among the anointed few, and “atta-boy” back-slaps and handshakes all around. Some even shed a tear for they know they will never see their ship again.

After the secret tour, XXXXX lands back at The Ranch and is the guest of honor at secret ceremony inside a closed hangar. The pilot is doused with cheap champagne and a handful of items that flew on this last flight are passed out among those very few who worked on or were instrumental in the program’s covert success.

Since the program, even in retirement is still highly-classified the blanks on the certificates will not be filled in. It will also not be signed, authenticated or notarized. It will be what it is – a love letter attached to a special plea from the black world.

The final disposition of the aircraft remains to be seen. It will either be destroyed and buried in a shallow grave at Area 51, alongside other covert aircraft prototypes such as Have Blue (which led to the F-117 Nighthawk) or will be placed in “flyable storage” capable of being dusted off and called into action should certain national crisis’s arise.

But more than likely it will be cut up for scrap.

XXXXX mission has now been passed on to unmanned drones which can do the job faster, better, cheaper and with little or no risk to human life due to unfriendly fire or malfunction.

Regretfully, secret hangar storage space is limited and at a premium, so in the end Pentagon bean counters will ultimately decide the fate of XXXXX

xxxx will be stripped, its secret and toxic stealth skin burned.Its standard instruments salvaged and unclassified usable parts put back into the military supply-chain with the airframe itself being crushed and buried.

It’s interesting to imagine the salvaged altimeter from the top secret XXXX ending up in an Air Force A-6 Texan II, it’s newbie pilot none the wiser his trainer has a direct connection to Area 51.

And that’s what bugs the secret cadre of nameless technicians and pilots who toiled for so many years on the XXXX program. These dedicated few gave up many weekends with their families, sometimes spending months away on deployments living basically like vampires, shutters drawn during the day, flying only at night.

Since XXXXX is a SAP (Special Access Program) with any information about the program compartmentalized and classified as Top Secret, anyone remotely attached to the project had to be vetted thoroughly and sworn to secrecy under the penalties of life imprisonment or (in extreme cases such as one involving espionage) the threat of death. At the least, even hinting to their wives or family what they were working on could get them fired and thrown into a Federal prison.

That said, those who worked on XXXXX are extremely proud of the aircraft and its contribution to keeping their nation safe, and as a result feel it’s a “crying shame” that no one will ever know about it.

One source close to the project tells me, “Tacit Blue and the Bird of Prey – two other secret prototypes - made it to the Air Force Museum – and so should XXXX. It will be a sad day for all of us if it’s buried.”

XXXX and the majority of many secret programs developed at Area 51 and the breakthroughs in military aviation technology that came about through their development will for the most part disappear into the pit that is the Black World. Whole chunks of aviation history are at risk of being lost because they will remain classified well into the foreseeable future even though the technology they represent (that of the 80s and 90s) is considered obsolete and of no military value to an enemy.

“The stealth genie has been out of the box for a long time now.” my source Tony tells me.

“China is building their first stealth warplanes based on tech gleaned from crashed F-117s, stolen plans and deductive reasoning. Iran has helped them as has Pakistan.
Iran let the Chinese examine and take samples of the crashed RQ-170 Sentinel drone and Pakistan (still hurting from the embarrassment of the bin Laden raid) did the same with the remains of stealth Black Hawk that crashed outside of Abbottabad. Samples of the skin of an F-117 that went down in Bosnia in 1999 have been broken down and analyzed in detail. The Chinese are masters at reverse engineering – but you know what? We are still twenty years beyond them when it comes to low observable technology and advanced avionics systems. Modern L.O.is much more than chemistry and shaping. We are well into our 7th generation of stealth. The Chinese are at step two.”

Although the bulk of classified aviation work going on at Area 51 is of the unmanned variety, there are at least two manned aircraft projects still flying out of Groom Lake. One is a small scale prototype of the Long Range Strike Bomber. Another is a medium stealth bomber that fills the gaps between the B-2, B-1B and the venerable 1950s era B-52. 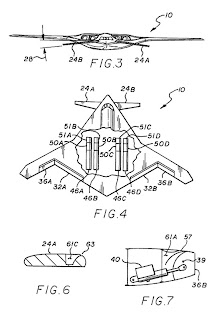 There is mixed information coming out of the black about the LRSB – some saying it’s unmanned and hypersonic, designed around an even more classified kinetic weapons system that can target and destroy deep buried nuclear facilities by tossing out at high altitude “rods from the gods” hardened depleted uranium slugs that tear through the earth like meteorites, obliterating the target without the nastiness of nuclear fallout.

A recently released study document titled US Air Force Hypersonic Science & Technology more than hints that the USAF is working on a Mach 5 bomber with an over the horizon hypersonic weapons kill capability to by operational by 2030.

The paper cites several very public hypersonic technology studies proving such a system is feasible such as NASP, X-51 Wave Rider, Blackswift and the High Fire series of tests, but sources out at Groom say this unclassified document is just window dressing for what they are hiding in the back room, or black room, a very close to operational hypersonic bomber.

“You know those booms that have been rattling windows of farm houses across the nation?” Tony says. “That’s us.” 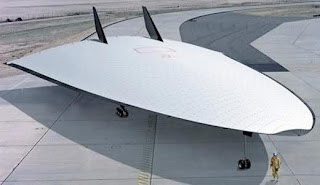 The Pentagon wants a non-nuclear rapid reaction and rapid kill weapon to use on both North Korea and Iraq’s nuclear facilities and they want it yesterday.

“Don’t be surprised if you read on the internet that such and such facility in Whereverstan suddenly imploded on itself. We want the Earth to open up and swallow these sites and no one will know what happened.” Tony tells me.

I replied, “But won’t they know if I write about it?”

He smiles smugly. “Maybe it’s operational and maybe it isn’t. Either way the goal is the same; they lose sleep, so we don’t.”

The other manned program at Area 51 is a medium bomber that may be based on Northrop’s failed ATF contender, the YF-23 Black Widow, now designated the FB-24. 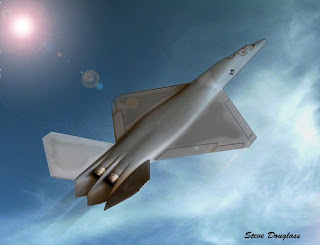 The FB-24 may already be in operational (albeit covert) service.

Search on the Internet and you’ll find that the FB-24 program was cancelled with the funding supposedly going to more UCAV development. But insiders say the FB-24 didn’t go away, it just went black.

Recently on a scouting trip to the White Sands Missile Range (including Holloman AFB) I photographed and monitored the communications of a flight of two aircraft launching just after dark that closely resembled published models and concept art released by Northrop Grumman.

The mystery duo then refueled with a GASSR 18 on AR-623 High and then flew “Direct KLSV (Nellis Air Force Base) – and then “direct somewhere in the Nellis Bombing Range.” My educated guess
is Area 51.

While refueling with GASSR 18 the boom operated inadvertently remarked on the UHF frequency of 319.500 MHz, “I’ve never seen this type before – what is it?” 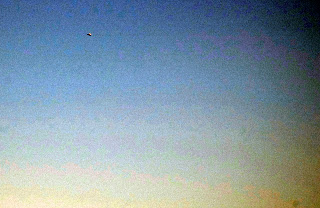 Unfortunately the photographs I took of the pair with a 300mm lens and at a very high ISO (3200) are grainy and not at all close to being glamour shots.

It was after all, after dark with just a hint of light at the western horizon. The shutter speed on my camera was slow – so to compensate I panned along with the aircraft while they sped by.

Although there is some motion blur some things are discernible, especially large flat angled twin vertical tail stabilizers much like those on the F-23. The pair took off from Holloman almost silently until they passed, then the air was filled with a deep bass rumble, reminiscent of the sound of a B-1B Lancer, echoing of the mountains surrounding the White Sand Missile Range.

As I followed them with my telephoto lens I noticed that despite the sound there were no afterburners glowing, indicating possible super-cruise modified GE F-120FX engines such as those on the YF-23, powerful but with a low aspect infrared signature and capable of high-speed without becoming hot glowing “reheat missile magnets.”

I’m puzzled as I thumb through the digital images not quite knowing what I’m looking at. I was expecting images of something spectacular, maybe the mythical Aurora or even my personal unicorn, the TR-3A Black Manta, a mini-B-2 type aircraft I spotted in New Mexico in 1993.

XXXXXX looks around one more time to see if he is being observed.

Once satisfied he says, “That’s it. That’s all that’s left of Joint Test Vehicle DASH 2. Don’t let them destroy DASH ONE.”

Posted by Steve Douglass at 7:28 AM 3 comments: