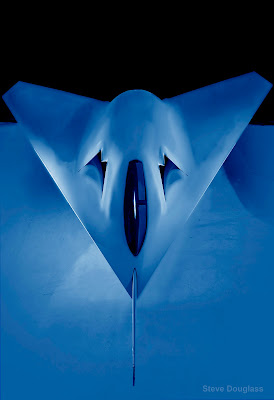 Pepper walked into the dark hangar. It was almost pitch black except for a sliver of light filtering through a slit at the front of the hangar doors.

“Wait here.” The General said as he disappeared into the darkness.

“The light switch is over here somewhere.”

The General’s voice trailed off as he walked off into the black hangar. He could hear him softly grumbling as he searched for the light switch.

Colonel Adam Pepper stood quietly in the dark, impatiently waiting for the secret to be revealed.

“Do you need some help?” Pepper called after the General.

“I’ve got it.” came the General’s voice from the darkness.

Pepper was surprised to hear the General’s voice sounding like it was coming from very far away. The hangar must be bigger than it looked from the outside.

His eyes adjusting to the near total darkness, Pepper realized he could make out a dark shape looming before him. He stretched his arms out to see if he could touch it and was surprised to find he could. It felt like a sheet of thick plastic, much of like a huge hanging shower curtain.

After hearing what sounded like the low buzz of an electrical circuit warming up, the hangar lights finally came on, glowing cool and slightly blue.

Once his eyes adjusted to the brightness, Pepper saw he was standing next to a thick translucent sheet of plastic hanging in front his face. Behind it he could just make out the shape of something, big, dark and sleek.

“Adam, I give you Excalibur.” the General said as he pulled open the plastic sheet.

Pepper walked through the sheeting to find he was face to face with one of the most amazing-looking aircraft he had ever seen.

It was roughly triangular-shaped, like the stealth fighters he saw every day, but obviously this craft was light-years beyond the crude angular-boxy shape of the F-117.

The first thing that struck Pepper odd was Excalibur’s lack of joints, seams or rivets.

The aircraft looked as if had been carved from a single piece of marble.

Pepper was astounded. He had never seen anything like it.

“Go ahead son. Touch it.” The General said. “You’ll be surprised.”

Pepper reached out and touched the surface of Excalibur.

“Push down on the skin.” He urged Pepper.

Pepper applied some pressure to his fingers and was surprised to feel the skin pushing back. It felt to him like the skin of an animal, a bit spongy and rubbery. Kind of like what the skin of a dolphin might feel like.

“It has taken our scientists almost fifty years to perfect it. It’s what they call “morphing nanoskin” technology.”

“Yes, as the mission needs change, the aircraft can shape-shift to accommodate the flight envelope.”

“The aircraft can change its shape?”

BUY THE BOOK HERE!
Posted by Steve Douglass at 7:17 AM No comments: