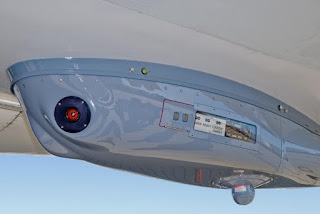 Northrop Grumman has won a contract to build a batch of Large Aircraft Infrared Countermeasure (LAIRCM) systems. This order was received under an existing indefinite delivery, indefinite quantity contract.


The LAIRCM defensive system is a directional, active IR jammer that is designed to defeat a wide range of ground-fired IR (heat-seeking) missiles. The system jams the infrared missile seekers through the sensor aperture, causing the missile to miss the intended target. LAIRCM automatically detects a missile launch, determines if it is a threat, and activates a high-intensity, laser-based countermeasure system to track and defeat the missile.

The advanced LAIRCM system will allow airplanes without built in systems the safety and security to enter hot-spots around the globe.

“With this award, we continue to protect U.S. and international partner aircrews from the threat of infrared guided weapons,” said Bob Gough, vice president, land and avionics C4ISR, Northrop Grumman.

The purpose of Northrop Grumman Corporation's Large Aircraft Infrared Countermeasures (LAIRCM) program is to protect large aircraft from man-portable missiles. The LAIRCM system will increase crew-warning time, decrease false alarm rates and automatically counter advanced IR missile systems. The missile warning subsystem will use multiple sensors to provide full spatial coverage. The counter-measures subsystem will use lasers mounted in pointer-tracker turret assemblies. LAIRCM is an active countermeasure that defeats the threat missile guidance system by directing a high-intensity modulated laser beam into the missile seeker, explained Cappelano. In addition, the LAIRCM system automatically counters advanced IR missile systems with no action required by the crew. The pilot will simply be informed that a threat missile was detected and jammed.


Much of the technology involved in the system, with the exception of the laser jammer, are non-developmental items that have been previously tested and are in production as part of the US Special Operations Command C-130 Directed IR Countermeasures AN/AAQ-24 Program. Northrop Grumman's AN/AAQ-24 (V) NEMESIS system is currently in use by the military in both the United States and the United Kingdom. Due to protection and commonality requirements, the LAIRCM C-130 Group A configuration and installation design shall closely match the Air Force Special Operations Command (AFSOC) C-130 modifications for the AAQ-24(V) Directional Infrared Countermeasures (DIRCM) system. Based on Air Mobility Command's urgent need for this capability, the C-130 Group A development effort must be completed in an accelerated fashion, without suboptimizing CCB and test program requirements.

An initial cadre of personnel was assigned to the LAIRCM Program. This cadre is located in the Subsystems SPO (ASC/SM), Wright-Patterson AFB, OH. This Team is responsible for leading an Air Force/Industry initiative to develop and implement the acquisition strategy for large aircraft IRCM systems in the near-term. It also serves as the core group for the permanent organization with program management responsibility for the development and implementation of Group A and Group B and risk-reduction activities over the long-term.

The development and proliferation of advanced infrared guided missiles has greatly increased the threat to military and civil aircraft of attack by these low cost antiaircraft missiles. Technology is being developed to counter this threat in form of advance directed laser jammers and associated missile approach warning sensors. Air Force Research Laboratory's Large Aircraft IRCM Advanced TechnologyDemonstration (LAIRCM ATD) developed and matured subsystem and integrated system technologies to counter the ever growing threat from these missiles. The technology development includes advanced concepts such as Closed Loop IRCM that promises a high power laser response to and IR missile engagement with threat adaptable jamming applied to achieve a rapid seeker breaklock..

Test experts completed live-fire testing on the Large Aircraft Infrared Countermeasures system 08 in White Sands, NM, putting the program on track to deliver the first laser-protected transport to Air Mobility Command by 2004. During the live fire tests, the LAIRCM system was mounted on a cable car equipped with heat sources representing a C-17 signature, which was used as a target for surface-to-air infrared-guided missiles. Live missiles were then launched against this target from inner-, mid-, and outer-ranges, across the missile's high "probability of kill" envelope. In each of these tests, the LAIRCM system was fully autonomously operated and had no prior knowledge of threat type or location. The system had to detect and declare the threat missile, then allocate the jamming assets required to defeat it.

The system currently consists of five basic elements: a Control Indicator Unit (CIU), an ultraviolet Missile Warning Subsystem (UV MWS), a Fine Track Sensor (FTS) subsystem, a Countermeasures Processor (CP), and a laser jam source subsystem. The CP is the master system controller and the interface among the subsystems. The Air Force may install up to three laser jammers on each aircraft type. In 2003, the Air Force tasked the LAIRCM program to support two Quick Reaction Capability requirements to get IRCM equipment into the field as quickly as possible. The first capability installed and tested a one-jammer turret configuration (vice three on the full-up system) on the C-17. The second requirement installed a system on the MH-53M Pave Low IV helicopter gunship. LAIRCM will undergo developmental test/operational test (DT/OT) and IOT&E on the C-17 during FY04 to support the full-rate production decision.

In response to the urgent requirement stated in the LAIRCM Operational Requirements Document, the Aeronautical Systems Center developed an evolutionary strategy to yield a near-term solution for the protection of large transport type aircraft. The use of proven subsystem solutions, integrated into a LAIRCM system, is the first step in the LAIRCM Evolutionary Acquisition strategy to address the overall requirement. This first step, designated Phase 1, is to identify a near-term LAIRCM solution. The LAIRCM System Program Office, in association with Air Force Research Laboratory, conducted comprehensive market research to evaluate options available from industry as well as from government programs. Based on the market research, only four subsystems demonstrated the maturity and performance to provide a near-term solution. All or part of the selected subsystems will comprise the LAIRCM system.

Four of the subsystems (CIU, FTS, CP, and UV MWS) will come directly from the Special Operations Command's (SOCOM) DIRCM program, presently in production. The final subsystem will be a Multi-Band Laser Subsystem, which has been developed by Northrop Grumman as part of its Internal Research and Development Program and has undergone considerable laboratory and field testing. The United Kingdom (UK) has installed the system on nine different aircraft types and there are plans for integration on eight additional aircraft types. SOCOM procured DIRCM systems under the UK contract. DOT&E approved the IOT&E Plan in October 2003.


The CLIRCM technology has been under development at the Wright-Patterson Air Force Base, Dayton, OH, for nearly three decades and was  moved to the Air Force Research Laboratory (Dayton, OH) Laser IRCM Flyout Experiment (LIFE) program. Past experimentation with critical components that were tested in an at-range static environment at AFRL-Dayton demonstrated significant promise in the CLIRCM technology to defeat all types of IR missiles. In fact, the US Navy borrowed the technology to demonstrate the defeat of advanced surrogate IR imaging and line scanning sensors. The closed loop system can rapidly identify and defeat the enemy missile.

The Air Force conducted highly successful field testing of the LIFE system in December 2000 at the White Sands Missile Range. These tests proved that the CLIRCM technology provides the system improvements that the Air Force had hoped. The laser-based CLIRCM techniques and technology offer a tremendous performance improvement and cost savings over the current laser-based open loop system being procured for the LAIRCM program.

With evolving threats of IR surface-to-air missiles (SAM) and air-to-air missiles (AAM), as defined in the Multi-Command LAIRCM Operational Requirements Document (ORD) for advanced IRCM protection of large aircraft, the Air Force needs to focus on fielding a laser-based CLIRCM system. This system will ensure that the men and women of the armed services are protected from lethal IR SAM and AAM threats. The LAIRCM Phase 2 system, employing laser CLIRCM technology, could equip a Small Scale Contingency (SSC) of 79 aircraft (C-17, C-130, KC-135).

Posted by Steve Douglass at 3:53 PM No comments: