Afghanistan evacuation continues but US government can't guarantee a safe trip to the airport.

WASHINGTON (SBG) — The U.S. embassy in Kabul issued a warning Wednesday that it cannot guarantee safe passage to the airport, the only way to leave Afghanistan.

The security situation in Kabul continues to change quickly, including at the airport," the notice says.
The warning comes as the U.S. military continues to accelerate what has been a chaotic evacuation process after the Taliban swiftly took over the country.

It also comes after National Security Adviser Jake Sullivan said the Taliban have agreed to allow “safe passage” from Afghanistan for civilians to get to the airport. There have been multiple reports of civilians being pushed back or turned away trying to get there over the last several days.

Asked about the warning at a briefing Wednesday, Deputy Secretary of State Wendy Sherman said she was not aware of any incidents where Americans were harassed or attacked going to the airport. She did concede there might be reports she wasn't aware of.

"The Taliban made a commitment to safe passage for American citizens," she said. "So far, it appears Americans have been able to get to the airport." 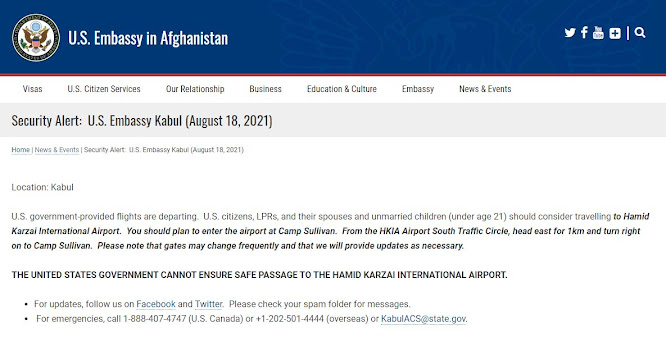 Posted by Steve Douglass at 12:59 PM No comments:

Meet the new Taliban - same as the old Taliban 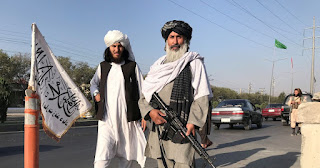 Taliban fighters reportedly fired into a crowd and beat protesters in cities throughout Afghanistan on Wednesday, just days after the insurgent group took control of the country.

Al Jazeera reported that at least two people were killed and 12 others injured after shots were fired during a protest in Jalalabad.

Dozens of Afghans gathered in the city to raise the national flag before the country’s Independence Day, according to The Associated Press.

As Afghans tried to lower the Taliban flag, which was raised after the insurgent group took over the region, fighters started firing shots in the air and attacking the Afghans with batons in an effort to disperse the crowd, the AP reported, citing video footage.

A television cameraman who tried to document the violence was also reportedly beaten by the insurgent group's fighters.

Fighters with the insurgent group have been patrolling the streets in Kabul, at times coming into contact with hundreds of Afghan protesters, The New York Times noted.

Despite the risks involved with demonstrating, protesters have been whistling, shouting and waving large Afghan flags in the streets, prompting Taliban forces to try to dissolve the crowds by firing shots into the air, according to the Times, which cited video aired by local news media outlets.

When those tactics did not work, however, the fighters reportedly resorted to force.


That violence was also seen at checkpoints in Kabul and near the local airport as the U.S. and other countries were operating evacuation flights from the region, according to The Washington Post.

The Post reported that some Afghans who sought to leave the country on evacuation flights were unable to do so because they came into contact with the Taliban at checkpoints.

The insurgent group's fighters reportedly beat a number of Afghans who tried to cross and intimidated others against fleeing the country, according to the newspaper, which cited other outlets' reports and an eyewitness account.

In another instance, a former interpreter who worked for the Australian army was reportedly shot in the leg by a Taliban fighter, according to SBS News.

The news of violence between the Taliban and Afghans comes just days after the insurgent group seized Kabul and entered the presidential palace in a relatively peaceful manner, effectively toppling the Afghan government and taking control of the country.

There were not many reports of clashes between the Taliban and Afghan security forces as the insurgent group seized control on Sunday.

“We don’t want Afghanistan to be a battlefield anymore,” Zabihullah Mujahid, the longtime top spokesperson for the Taliban, said during a news conference on Tuesday, according to the Times.

“From today onward, war is over,” he added.

The current developments in the region, however, are putting those statements to the test.

White House national security adviser Jake Sullivan told reporters on Tuesday that the Taliban “informed” the U.S. that they “are prepared to provide the safe passage of civilians to the airport, and we intend to hold them to that commitment.”

He later said the U.S. has been “working, engaging, coordinating with Taliban elements on the ground to ensure safe passage.
Posted by Steve Douglass at 8:58 AM No comments: