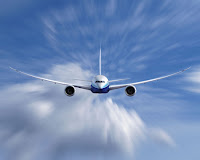 LONDON -- A fire on an empty Boeing 787 Dreamliner plane forced Heathrow Airport to close both its runways Friday, suspending all arrivals and departures.

The airport said in a tweet that there were no passengers aboard the Ethiopian Airlines plane, and British police said the fire is being treated as unexplained. London's fire department said its firefighters were on standby to assist Heathrow's crews.

Television images showed nearly a dozen fire trucks on the scene and firefighters standing around the Ethiopian Airlines plane, which was parked on a remote stand.

Fire-retardant foam appeared to have been sprayed, but no damage to the plane was immediately apparent.

The incident is likely to heap more pressure on Boeing Co., which makes the Dreamliner.

The Dreamliner was grounded for three months earlier this year amid concerns about overheating lithium-ion batteries. Shares in Boeing have fallen more than 1.3 percent on the news.
Posted by Steve Douglass at 10:19 AM No comments: