Another version of the photo focusing on what looks like Suspect 2 and his bag, but blurring out the crowd, was previously aired by Fox 25 and other news outlets.

These photos are unconfirmed. However, a long thread of analysis on Reddit suggests that Martin and his family are shown here.

Reddit previously picked up on a hi-res image of Suspect 2 that was later effectively confirmed by the FBi and the New York Times.

Earlier the FBI released images of two suspects and asked for the public's help identifying them.

A user on reddit notes that the picture shows the spot of the second bombing because the background shows the sign for the Atlantic Fish restaurant, which is located where police place the second blast.

As amateur investigators around the world study images from the case, other tragic stories from the April 15 attack can be seen more clearly too.

The above photo, if it does indeed show Martin Richards and his family, is heartbreaking


Although Richard DesLauriers, the special agent in charge of the FBI's Boston field office said "The photos released by the FBI  today are "the only ones that the public should view to assist us, other photos should not be deemed credible [and] create undue work for vital law enforcement resources." that didn't stop the amateur sleuths at REEDIT who scoured the thousands of photos posted on the internet and found what may very well be a much clearer image of one of the persons wanted for questioning in conjunction with the bombing.

The official photos published on the FBI's Web site show two men, one wearing a black baseball cap and carrying a backpack, and the other wearing a white baseball cap, around the scene of the blasts.

The stills - blurry and pixelated because they were pulled from low-resolution video cameras - show two men, one wearing a black baseball cap and carrying a backpack, and the other wearing a white baseball cap, around the scene of the blasts. You can view the FBI's images HERE.

The new high resolution image - showing what might be one of the bombers fleeing the blast was found posted on a website featuring advertising for pornography. It's only a matter of time as more photos are posted to the Internet, undoubtedly more images purported to be  of the suspected bombers will begin appearing. The source of this new image is unknown.

An announcement on Reddit posted after the FBI's press conference began says: "At this point in time the only photographs that are allowed to be posted in this subreddit are images that may contain the FBI's two suspects -- all others will be deleted."

UPDATE: The original photographer of the photo above has been identified. His original post (on Facebook) along with the photo read:

" Friends & Family,I have been feeling down since the Boston Marathon bombing because I couldn't do anything to help the injured victims...until now. Thanks to my friend Jason who pointed out to me that the photo I took right after the second bomb and posted on FB has suspect #2 in the left hand corner of the photo. White baseball cap turned backwards, black sweatshirt, NO BACKPACK right after the bomb went off. Compare to the ones posted by CNN, it is unmistakable. I spoke to the FBI and it is may be the best photo they have at current time!!! One step closer to taking these @!#?#'s down...share as much as you can so that if someone knows this person they can turn them in."

Posted by Steve Douglass at 7:59 PM No comments: 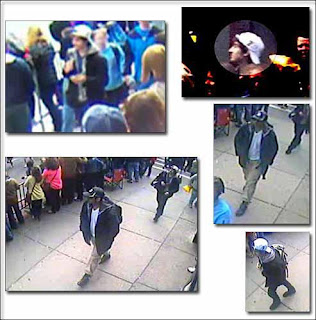 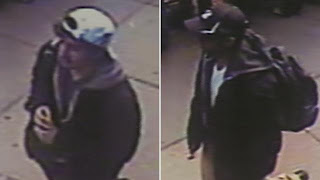 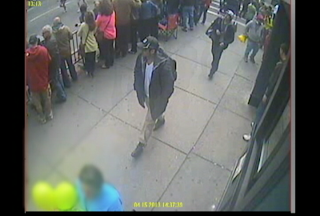 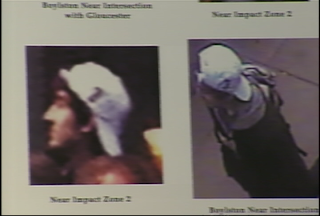 Posted by Steve Douglass at 2:35 PM No comments: