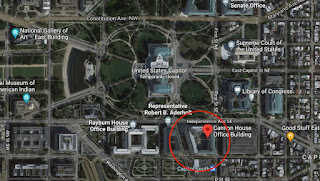 WASHINGTON - Capitol police say they're conducting an active bomb threat and evacuating nearby buildings on Capitol Hill after a suspicious vehicle was identified near the Library of Congress.

The Associated Press says a possible explosive may have been located in the "suspicious vehicle."

Law enforcement officials told the Associated Press that investigators on the scene were working to determine whether the device was an operable explosive and whether the man in the truck was holding a detonator.

The officials were not authorized to publicly discuss the matter and spoke on condition of anonymity.

The following streets in the area have been closed:

Capitol police are asking people to avoid the area.

This is a developing news situation.
LIVE LOOK VIA WUSA9
UPDATE:
Several governmental buildings in Washington, D.C., were evacuated Thursday morning due to what Capitol Police call "an active bomb threat investigation" after a man drove a pickup truck onto a sidewalk.

Authorities are also investigating a video posted to Facebook that purports to have been posted by the man in the vehicle.
The Cannon House Office Building, a congressional office building, was evacuated via underground routes. The Library of Congress and Supreme Court building were also evacuated. Both the Supreme Court and Congress are on recess.
Messages have been sent to congressional staffers asking that they "remain calm and relocate to Longworth House Office Building using the underground tunnels."
Senate staff were asked in a message to "remain clear of the police activity" and to "please move indoors" if they were outside on Capitol grounds.

The FBI said it's responding. The White House is monitoring the situation and is receiving updates from law enforcement, according to an administration official.

This is a developing story. Please check back for updates.
WASHINGTON — UPDATE, 2:21 p.m.: A law enforcement source tells ABC News the Capitol bomb threat suspect has surrendered and is in police custody.
Posted by Steve Douglass at 8:02 AM No comments: