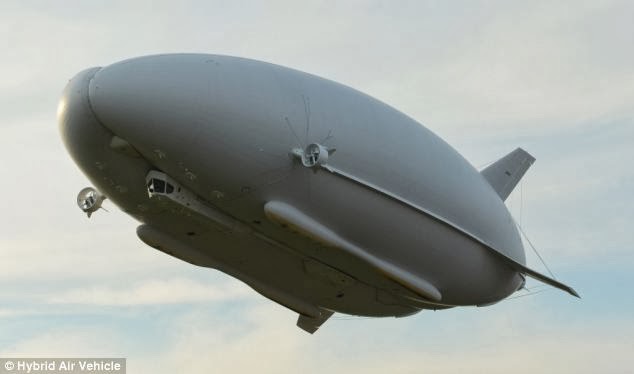 THE world's longest aircraft was unveiled in Bedfordshire, England this morning (February 28).

More than 300ft long the airship costs around £60 million and is bigger than the largest airliners.

The Hybrid Air Vehicle looks like a giant airship, but the high tech design means it also acts like one big aeroplane wing.

It was originally sold to the US Army but now it's been bought back by the original British developers who are planning their first flight this year.

It's a massive 92m long which is about 20m longer than the biggest airliners that currently exist.

It costs about £60m and the flying machine will eventually be able to carry 50 tons at a time, and could potentially fit hundreds of people on board.

Known as the HAV304, the 91m-long aircraft is designed to stay airborne for up to three weeks and can be used for a variety of functions including surveillance, communications and delivering aid.

The ultra-green aircraft created by Hybrid Air Vehicles (HAV) has just received a £2.5m grant from the UK Government and was displayed at Cardington in Bedfordshire in the only hangar big enough to accommodate its 34m-wide and 26m-high frame.

It combines the best of aeroplane, airship and helicopter design and HAV reckons there could be a world market for between 600 and 1,000 of these aircraft.

HAV chief executive Stephen McGlennan said: "This Government support shows that HAV has a credible way of solving one of the aerospace industry's key challenges – creating a viable low-carbon aircraft which can travel for days and for thousands of miles without refuelling, landing without the need for airports. It is a great story of a British company leading the world."

The vehicle was first flown in the USA, and is due to fly in the UK later this year. The plan is that the HAV304 will eventually lead to the development of the Airlander 50.

The HAV304 was first developed for the US government as a long-endurance surveillance aircraft but it fell foul of defence cutbacks. Getting the aircraft to the UK late last year involved the use of 15 gigantic containers, with four days needed to unload the equipment using a 50-tonne crane and a 100-tonne one.

It can reach 20,000ft and has a cruising speed of 92mph (148 km/h) powered by four 4-litre V8 diesel engines. The hull will be filled with the inert gas helium allowing it to combine the best of the characteristics of fixed wing aircraft and helicopters with lighter-than-air technology.

For the time being, the company plans to produce around 10 a year for the next four or five years, which is expected to lead to the creation of 1,800 jobs in the Bedfordshire area.

Business Secretary Vince Cable said today : "The growing aerospace sector has the potential to generate thousands of new jobs and billions of pounds to the UK economy in contracts.

"That is why so much effort is being put in by government and industry to ensure we stay ahead of the competition and build on our strong position as second in the world for aerospace."

He added: "As part our long-term industrial strategy we are jointly funding £2bn of research and development into the next generation of quieter, more energy-efficient and environmentally-friendly planes.

"That includes backing projects like HAV's innovative low-carbon aircraft which can keep us at the cutting edge of new technology. Here is a British company that has the potential to lead the world in its field."

Posted by Steve Douglass at 5:49 AM No comments: