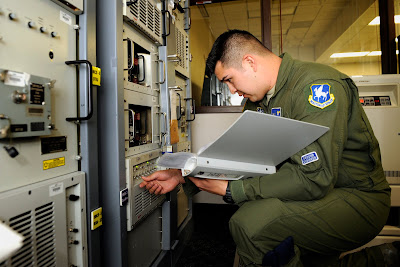 Editors note: If they are looking for a good home for the SATCOM receivers- I know of one.

"Today we turn the lights off on the command and control system that has been operating the wing's secured, protected military satellite communication operations for 16 years," said Lt. Col. Douglas Schiess, 4 SOPS commander.

Through the SMCS, 4 SOPS has been operating the Milstar constellation, the Air Force's protected SATCOM system that provides warfighters global, secure, survivable, strategic and tactical communication during peacetime and throughout the full spectrum of conflict.

The SMCS and AFCPT have been providing ground control operations for Milstar since 1995. At that time SMCS was leading technology that outperformed its predecessor, the Mission Control Element. This time, the Advanced Satellite Mission Control Subsystem is taking over the lead and is providing ground control support for both the legacy Milstar and the next generation of protected MILSATCOM weapons systems, the Advanced Extremely High Frequency satellites.

"This is a huge leap forward in capability for both our operators and our end users," said Col. Wayne Monteith, 50th Space Wing commander. "We have proven this capability to provide combat effects to the warfighter much faster. This is a big day for us and it's long overdue."

The commander also recognized the wing's partners in this endeavor.

"We couldn't have done this without the great support from our partners at Headquarters Air Force Space Command, the MILSATCOM program office and the contractors who worked hard to make this transition a reality," said Colonel Monteith.

The ceremony included members outside of Mod 13, as the 148th Space Operations Squadron conducted power down of the unit's fixed constellation control station at Vandenberg Air Force Base, Calif.

Now that the equipment has been turned off, 4 SOPS members are working with local and national museum curators to find the right home for the legacy equipment.
Posted by Steve Douglass at 12:43 PM No comments:


RT: A video of what was claimed to be a mutilated alien corpse, which scored hundreds of thousands of views on YouTube, has turned out to be fake.
The tiny “dead alien” is just skin from chicken filled with bread, reports the website 7d.org.ua. Police questioned the men who claimed to have found the “body” and they allegedly confessed to creating it themselves.

The chief editor of the local Kabansk-Info newspaper initially thought that it was the body of an infant in the video and alerted the police. Officers immediately started the investigation and identified the alleged author.

They went to his house and asked him about the infant’s body. The scared man reportedly showed a fake alien corpse. It was even painted in “alien colors”. Scolding is the only possible punishment for such a stunt as it cannot be considered a crime, the report says.

The footage was taken near the village of Kamensk in the Russian republic Buryatia, just north of Lake Baikal, the file’s description said.
It showed what appeared to be a humanoid body less than a meter high with a skeletal big-eyed head and thin naked body. One of its legs was missing.
Emotional off-screen comments said the body was found a couple of hours before and was clearly very dead.

Local media reported there were numerous reports of UFO sightings in the area in March, some of them later attributed to bombing training at a nearby military range.
The video was uploaded on YouTube on April 14. Three days later it was translated into English and its popularity skyrocketed in the following days. It beat the one million benchmark on Tuesday.


JetMan" Yves Rossy, the Swiss aviator, engineer, and PopSci favorite whose jet-powered wing has carried him across the English Channel and Lake Geneva, is planning yet another jet-winged feat, his first on U.S. soil. On May 6, Rossy plans to fly through the Grand Canyon in Arizona, notching what is sure to be a number of "firsts" for both Rossy and the Canyon.
The exact point of Rossy's flight has yet to be revealed, but we do know that it will take place somewhere in the Western Grand Canyon area and that during his flight Rossy will pass within 700 feet of onlookers as he negotiates his way through the canyon.

For the uninitiated, Rossy flies a novel jet-powered wing of his own design that straps directly onto his back--his body serves as a kind of rudder to control the thing--and provides thrust via four small engines. While the thrust is significant (Rossy can climb to some degree), it's not enough to get him off the ground, so he has to climb to elevation aboard a plane before jumping and going airborne.
That means on Friday, May 6, Yves Rossy is going to jump out of a plane into the Grand Canyon and then fly through it with jet motors strapped to his back before parachuting to safety. So yeah, it's going to be cooler than the time you went to the Grand Canyon with your grandparents when you were six. Way cooler.


Read more HERE
Posted by Steve Douglass at 11:47 AM No comments: