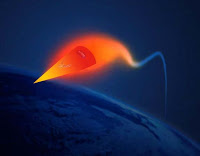 The unmanned Falcon Hypersonic Technology Vehicle 2 (HTV-2) is designed to fly through the upper reaches of Earth's atmosphere at speeds of up to Mach 20, providing the U.S. military with a possible platform for striking targets anywhere on the planet with conventional weapons.

The HTV-2 was launched April 20 aboard a Minotaur IV rocket from Vandenberg Air Force Base, Calif., according to the Defense Advanced Research Projects Agency (DARPA).

The test flight called for a 30-minute mission in which the vehicle would glide at high speed before splashing down in the Pacific Ocean, north of a U.S. military test site at the Kwajalein Atoll.

The glider separated from the booster but soon after the signal vanished, a spokeswoman said.

"Preliminary review of data indicates the HTV-2 achieved controlled flight within the atmosphere at over Mach 20. Then contact with HTV-2 was lost," said Johanna Spangenberg Jones, a spokeswoman for DARPA.

"This was our first flight [all others were done in wind tunnels and simulations], so although of course we would like to have everything go perfectly, we still gathered data and can use findings for the next flight, scheduled currently for early 2011," she said in an e-mail message.

The test flight was supposed to cover a total of 4,100 nautical miles (7,600 kilometers) from lift-off and scientists had hoped to conduct some limited maneuvers, with the HTV-2 banking and eventually diving for its splash down.

The hypersonic program appears to fit in with U.S. plans to develop a way of hitting distant targets with conventional weapons within an hour, dubbed "prompt global strike."

According to a Pentagon fact sheet for the vehicle, "the U.S. military seeks the capability to respond, with little or no advanced warning, to threats to our national security anywhere around the globe."

A hypersonic plane could substitute for a ballistic missile armed with a conventional warhead, as other countries might suspect the missile represented a nuclear attack.

"Aside from its speed, another advantage is that it would not be mistaken by Russia or China for a nuclear launch," said Loren Thompson, an analyst with the Lexington Institute who has done consultant work for Lockheed Martin.

The U.S. Air Force has also looked at hypersonic vehicles for intelligence-gathering if spy satellites in low orbit were attacked, he said.
Posted by Steve Douglass at 8:14 PM No comments:

An Iranian maritime patrol aircraft buzzed the U.S. Navy aircraft carrier Dwight D. Eisenhower at sea in the Middle East last week, passing within 1,000 yards of the ship, but American defense officials sought to downplay the encounter as relatively common.

The Iranian navy Fokker F27 turboprop reconnaissance plane had been flying near the Eisenhower Strike Group for about 20 minutes before it made its low pass on April 21, according to a defense official who was not authorized to talk publicly about the incident and asked not to be identified. The official did not know if the Eisenhower took any defensive actions, such as changing course or ordering its fighters to escort the intruder away. No one was hurt and the Iranian aircraft soon retired.

The Eisenhower and its escorts had been tracking the Fokker surveillance plane the entire time, the defense official said; it didn't try to pop up from low altitude or surprise them. There was no information about exactly where the encounter took place - for example, in the Persian Gulf or the Gulf of Oman - but the official said it happened in "international waters."

"From our perspective, this is not something to get excited about - this is not out of the ordinary - this is within the bounds of what has happened in the past," the official said.

The date of the fly-by would seem to put it near the start of a series of Iranian naval exercises that took place last week in the Persian Gulf; dubbed Great Prophet 5, the Iranian navy and the Iranian Revolutionary Guards Corps practiced small boat swarms and unveiled a new fast-attack missile craft.

Iranian ships and aircraft approach U.S. warships relatively often, apparently to test how they respond in close proximity. In 2008, Iranian speedboats darted among a formation of three American warships transiting through the Strait of Hormuz, which blasted a warning with their horns and went to flank speed to escape.

The U.S. Navy has a long history of sometimes tense encounters at sea, including years' worth of jousting between carrier aircraft and Russian Tu-95 bombers, whose crews liked to get as close as possible to U.S. carriers during the Cold War. When two Russian bombers buzzed the carrier Nimitz in the Pacific in 2008, Chief of Naval Operations Adm. Gary Roughead said at the time it didn't worry him - "they were stretching their wings, so to speak."
Posted by Steve Douglass at 8:04 PM No comments: