The U.S. Air Force has confirmed to Aviation Week the existence of the so-called "Beast of Kandahar" UAV, a stealth-like remotely piloted jet seen flying out of Afghanistan in late 2007.

The RQ-170 Sentinel, believed to be a tailless flying wing design with sensor pods faired into the upper surface of each wing, was developed by Lockheed Martin's Advanced Development Programs (ADP), better known as Skunk Works. An Air Force official revealed Dec. 4 that the service is "developing a stealthy unmanned aircraft system (UAS) to provide reconnaissance and surveillance support to forward deployed combat forces."

The UAV had been discussed on the Ares technology blog, as well as elsewhere online, but the USAF statement to Aviation Week was the first to detail the aircraft.

"The fielding of the RQ-170 aligns with Secretary of Defense Robert M. Gates' request for increased intelligence, surveillance and reconnaissance (ISR) support to the combatant commanders and Air Force Chief of Staff Gen. Norton Schwartz's vision for an increased USAF reliance on unmanned aircraft," says the emailed statement.

The RQ-170 is flown by the 30th Reconnaissance Squadron at Tonopah Test Range, Nev. - home of the F-117 stealth fighter when the program's existence was secret - and falls under Air Combat Command's 432d Wing at Creech Air Force Base, Nev. At Kandahar, the Sentinel was seen operating out of General Atomics Aeronautical Systems' hangar.

The 30th RS was activated as part of the 57th Operations Group on Sept. 1, 2005, and a squadron patch was approved July 17, 2007. The activation - although not the full meaning of the event - was noted among those who watch for signs of activity in the classified world.

The RQ-170 designation is similar to that of the F-117 - a correct prefix, but out of sequence to avoid obvious guesses of a program's existence. Technically, the RQ designation denotes an unarmed aircraft rather than the MQ prefix applied to the armed Predator and Reaper UAVs. The USAF phrase, "Support to forward deployed combat forces," when combined with observed details, suggest a moderate degree of stealth (including a blunt leading edge, simple nozzle and overwing sensor pods) and that the Sentinel is a tactical, operations-oriented platform and not a strategic intelligence-gathering design.

Many questions remain about the aircraft's use. If it is a high-altitude aircraft it is painted an unusual color - medium grey overall, like Predator or Reaper, rather then the dark gray or overall black that provides the best concealment at very high altitudes. The wingspan appears to be about 65-ft., about the same as an MQ-9 Reaper. With only a few Internet images to judge from - all taken from the left side - the impression is of a deep, fat centerbody blended into the outer wings.

With its low-observable design, the aircraft might be useful for flying the borders of Iran and peering into China, India and Pakistan for useful data about missile tests, telemetry as well as gathering signals and multi-spectral intelligence.
Posted by Steve Douglass at 9:57 PM No comments:

Last Man Flying? Not for quite awhile Deptula says. 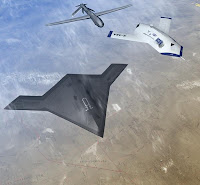 Air Warfare WUSA
The episode, which focuses on the future of unmanned military platforms, will air in the Washington area on WUSA (channel 9) at 9 p.m. Dec. 8. It will also be available at www.DefenseNewsTV.com. "This Week in Defense News" airs Sunday mornings on WUSA.

As the defense community debates the future of combat tactical aviation, Deptula said during the taping that any possible fielding of a fleet of totally unmanned - and even totally autonomous - combat planes is many years away.

That's because there is no sensor package capable of "360-degree situational awareness that can process information" and decide on how to act upon it better than the human brain, he said.

Vice Adm. Jack Dorsett, deputy chief of naval operations for information dominance and the director of naval intelligence, said the sea service "will walk our way into" unmanned tactical aircraft because "there are some significant challenges ahead."

The Navy continues "early stages" of tests on its X-47B unmanned combat aircraft. A fact sheet from prime contractor Northrop Grumman says the aircraft will demonstrate "carrier-based launch and recovery in the 2011 timeframe," and enter service "in the 2020 timeframe."

Just how the Air Force and the other military services should proceed with the next generation of tactical air frames is under consideration in the much-anticipated 2010 Quadrennial Defense Review.

Senior Pentagon brass have been grappling with the issue for some time.

"We're at a real time of transition here in terms of the future of aviation, and the whole issue of what's going to be manned and what's going to be unmanned, what's going to be stealthy and what isn't," and how to address the threats has changed even in the past few years, Chairman of the Joint Chiefs of Staff Adm. Michael Mullen told the Senate Armed Services Committee in May.

At the hearing, Mullen endorsed the notion that the Air Force might be building its last manned fighter jet.

"There are those that see JSF as the last manned fighter," Mullen told the Senate panel. "I'm one that's inclined to believe that."

Deptula, who said the U.S. military is years from having totally unmanned combat planes, nevertheless sees many promising technologies already under development. Among them are "planes the size of a fly operating in this room watching and collecting information on everything we are doing."

Meantime, Deptula and other senior military officials on the special said the four U.S. services are cooperating more than ever in the areas of unmanned systems and sharing intelligence data.

Army Lt. Gen. Michael Vane, futures director at the Army Capabilities Integration Center, said his service - and the others - have reached an unprecedented level of cooperation during the Afghanistan and Iraq conflicts.

The new way of doing business, Vane said, is doing whatever necessary to meet the needs of commanders who are directly engaging enemy forces.
Posted by Steve Douglass at 6:35 AM No comments:

FAA Reviews 'Operational Error' In Colo. Airspace
DENVER (AP) ― A commercial plane turning too late breached the amount of space it was supposed to keep between two other planes in an incident in late November, a federal aviation official said Wednesday.

The plane was following an air traffic controller's directions when it turned near Denver International Airport and lost the required distance between two planes simultaneously, said Mike Fergus, a spokesman for the Federal Aviation Administration.

Planes at high altitudes are supposed to keep 5 miles of horizontal distance and 1,000 feet of vertical space between them, he said. Fergus told The Associated Press that he did not know how close the planes were in the Nov. 23 incident.

Planes from SkyWest, Frontier and Republic airlines were involved, Fergus said, but he did not immediately know Wednesday which one made the wrong turn.

He said the controller had given correct directions to the pilot, but the pilot had flown past the point where the plane could have followed those directions and instead made a late turn.

"We are investigating to find out what caused the circumstances where the controller made the wrong decision" and how to prevent it from happening again, he said.

Fergus classified it as an "operational error" rather than a near-midair collision, saying none of the pilots or the air traffic controller reported it as such.

Alarms sounded in at least one of the cockpits telling the pilots to take evasive action and in the Denver Air Route Traffic Control Center, Fergus told a Denver TV station.

"It was a serious situation," he said.
Posted by Steve Douglass at 5:14 AM No comments:

Marines are trying to make good on President Obama's promise to "reverse Taliban momentum" in southern Afghanistan, launching with the first major offensive since the president spoke about his Afghanistan plans Tuesday night.

This is the first time the Osprey tilt-wing aircraft have been used in an offensive in Afghanistan.

The commander of the operation dubbed "Cobra's Anger," Lt. Col. Martin Wetterauer, said two Marines units dropped into two areas at 3 a.m. on Friday morning. The focus of the operation is to "cut off enemy supply and communications lines to the north."
Posted by Steve Douglass at 5:06 AM No comments:

Nothing off limits for terrorists/Pakistan mosque attacked.

Several explosions followed by gunfire were heard inside the mosque around 1:30 p.m. local time, according to Gen. Athar Abbas, a Pakistani military spokesman. It was not immediately clear what caused the explosions or who fired the gunshots.

The militants entered the compound by climbing over a wall, said Aslam Tareen, Rawalpindi police chief. Several children and elderly worshipers are among the dead.
The mosque -- frequented by retired and serving military officials -- is in a residential area near national army headquarters. A witness told GEO TV that there were up to 300 worshipers at the mosque at the time of the attack.
This is the first attack in Rawalpindi since a suicide bomber targeted a bank on November 2.
On October 10, militants stormed army headquarters in Rawalpindi, taking several people hostage before security forces killed them.
Posted by Steve Douglass at 4:58 AM No comments: