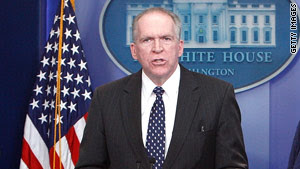 Washington (CNN) -- The government had sufficient information to have potentially disrupted an al Qaeda plot to bomb an airliner on Christmas Day, but failed to identify Umar Farouk AbdulMutallab as a potential bomber, a White House review of the incident shows.

In the end, the six-page report found, it was the

inability of the intelligence community to "connect the dots" in putting all the pieces of information and analysis together.

"The intelligence fell through the cracks. This happened in more than one organization," Deputy National Security Adviser John Brennan told reporters after President Obama spoke Thursday.

Information was gathered on a possible al Qaeda plot , according to the report, between mid-October and late December 2009.

"Though all of the information was available to all-source analysts at the CIA and the NCTC [National Counter Terrorism Center] prior to the attempted attack, the dots were never connected, and as a result, the problem appears to be more a component failure to 'connect the dots,' rather than a lack of information sharing," the report said.

Al Qaeda in the Arabian Peninsula, a Yemen-based offshoot of the terrorist network that attacked New York and Washington in 2001, has claimed responsibility for the December 25 plot.

According to the report, U.S. counterterrorism officials had information about AbdulMutallab, al Qaeda threats to Americans "and information about an individual now believed to be Mr. AbdulMutallab and his association with AQAP and its attack planning." But "the dots were never connected" -- not because information wasn't shared among U.S. agencies, but because it was "fragmentary and embedded in a large volume of other data."

Once the threat was discovered, the intelligence community leadership failed to increase resources working on the "full AQAP threat."

The report said the counterterrorism apparatus "failed before December 25 to identify, correlate, and fuse into a coherent story all of the discrete pieces of intelligence" that the U.S. government had in hand about "the emerging terrorist plot." Read the summary of the security review (PDF)

Posted by Steve Douglass at 9:16 PM No comments:

(CNN) -- Al Qaeda has claimed responsibility for the suicide bombing in Afghanistan last month that killed seven CIA employees and contractors and a Jordanian military officer, according to a statement posted on Islamist Web sites.

Mustafa Abu Yazid, al Qaeda's commander of operations in Afghanistan and its No. 3 man, said the attack avenged the death of Baitullah Mehsud, leader of the Taliban in Pakistan who was killed in a missile strike last August, and al Qaeda operatives Saleh al-Somali and Abdullah al-Libi.

A former U.S. intelligence official identified the suicide bomber as Humam Khalil Abu-Mulal al-Balawi, a Jordanian doctor who acted as a double agent. He was recruited as a counterterrorism intelligence source, according to a senior Jordanian official.

U.S. sources said bin Zeid was the Jordanian operative working closely with al-Balawi, who was from the same hometown as the onetime leader of al Qaeda in Iraq, Abu Musab al-Zarqawi.

Jordanian and U.S. intelligence agencies apparently believed that al-Balawi had been rehabilitated from his extremist views and were using him to hunt Ayman al-Zawahiri, al Qaeda's No. 2 figure, the former intelligence official said.