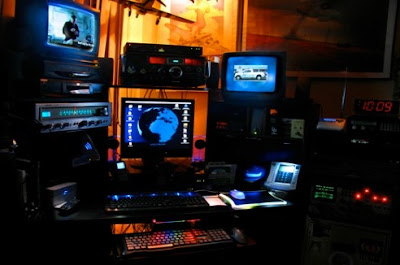 I have had many people e-mail me and ask me to take a gander at "KitchComn" my home-based communications center where I monitor the world via the airwaves and the digital waves. It all flows in through many electric pipes and its recorded, sifted and then distributed to various news (local and national) agencies.

Via my computer-controlled monitoring post I listen in to local and international police, public safety, military, satellite, aviation and emergency frequencies and send out "bots" over the Internet also searching for breaking news.

But for a better description- visit the link below.

Following Boeing’s recent revelation that it had completed tests of the counter measures dispenser system (CMDS) for the Australian 737 Airborne Early Warning and Control aircraft for Project Wedgetail, it seems the first aircraft has already been delivered. According to my information the first 737, callsign ‘Boeing 201’ departed a gloomy Seattle on Nov 6 – bound for sunnier climes in Australia via Honolulu and Pago Pago. The second Boeing-converted aircraft is also set to follow by the end of the month, confirms the company. Separately Boeing is also expected to announce in the next day or so that the first Australian-completed Wedgetail is due to fly to the United Arab Emirates to participate in the upcoming international show in Dubai. The aircraft, one of four converted and completed at RAAF Amberley, is likely to be the third Wedgetail which first flew in modified form in late January 2008.

Posted by Steve Douglass at 5:52 PM No comments:

Kabul, Afghanistan (CNN) -- Military divers have found the body of a U.S. paratrooper who went missing last week in a river in western Afghanistan.
The NATO-led International Security Assistance Force said the soldier was found close to where he disappeared on November 4. Officials are continuing their search for a second paratrooper lost at the same time.

Both men -- from the 4th Brigade Combat Team, 82nd Airborne Division -- disappeared in the Morghab River near Afghanistan's border with Turkmenistan. The men were on a routine resupply mission, ISAF said.
Family members identified the recovered body as that of Benjamin Sherman, 21, of Plymouth, Massachusetts.

"He didn't jump in because he was trained to, but because that's what his heart told him to do."
Sherman's mother, Denise, said the family called him "the unstoppable one."
"I raised him with the understanding that when you choose to do something, you do it to the best of your ability," she said in a statement to WCVB. "He was powerful, ingenuous and determined."
Posted by Steve Douglass at 6:26 AM No comments: