By Malcolm Moore in Shanghai

Yang Liwei, the 44-year-old military pilot who commanded the Shenzhou Five mission in 2003, revealed the menu on-board the spacecraft in his autobiography, The Nine Levels between Heaven and Earth.

"Many of my friends are curious about what we eat [in space] and think that the astronauts must have some expensive delicacies, like shark's fin or abalone," he wrote. "Actually we ate quite normal food, there is no need to keep it a secret," he added.

He listed a menu including braised chicken, steamed fish and dog meat from Huajiang county in Guangdong, which is famed for its nutritional benefits in China.
A local proverb in the south of China is that "Huajiang dog is better for you than ginseng", referring to the medicinal root that plays a vital role in traditional Chinese medicine.

READ THE REST OF THE STORY HERE
Posted by Steve Douglass at 8:54 AM No comments: 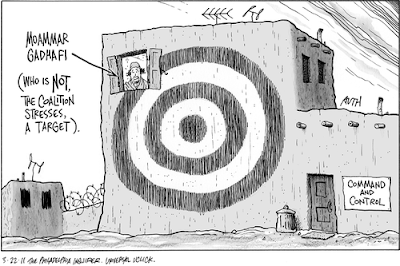 Tripoli, Libya (CNN) -- Libyan leader Moammar Gadhafi is alive despite what a Libyan government official called a NATO attempt to kill him by bombing his compound, a government spokesman asserted in a defiant statement Monday.

"The message that was sent by NATO in the early hours of this morning was sent to the wrong address," Mussa Ibrahim said in a written statement.
The statement came hours after the sounds of loud explosions and jets pierced through Tripoli's skies and state-run TV reported that airstrikes flattened a building at Gadhafi's compound.

The airstrikes appeared to be some of the heaviest attacks by NATO in the last few weeks as the deadly fighting in Libya rages on.

A banner on Libyan state television cited a military source saying that the "crusaders' airstrikes" were targeting both civilian and military targets, resulting in casualties and damage.

It was unclear where Libya's longtime ruler was on Monday.
Meanwhile, despite reports that Gadhafi's forces have withdrawn from the war-torn port city of Misrata, reports of casualties there continue to mount.
Misrata is the scene of some of the deadliest battles of the war as rebels attempt to oust Gadhafi, who has been in power for 42 years.


Bani says at least one Gadhafi brigade duped a group of opposition fighters on Sunday by raising the rebel flag, then opening fire when the rebels cheered and approached.
"They were happy to see them and they were clapping, and that's when the Gadhafi brigade started shooting," Bani said.

READ THE REST OF THE STORY AT CNN HERE
Posted by Steve Douglass at 8:08 AM No comments: