Russians to fly over Area 51? 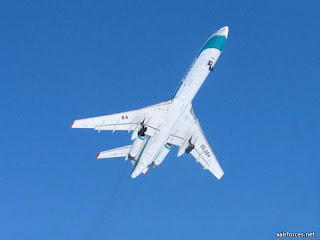 MOSCOW:  Russian military inspectors will begin a survey flight this week above the United States under the international Open Skies Treaty, Russia’s Defense Ministry has said.
Russian experts will conduct the survey flight over the US territory in a Tupolev Tu-154 M/LK-1 aircraft during the period from November 25 and December 3, a spokesman said.
The flight will start from the Travis Air Force Base, California. Its maximum range will be 4,250 kilometers (2,600 miles) and includes flights over restricted areas in Nevada, New Mexico, Texas  and California.
During the flight, Russian and US specialists will operate surveillance equipment on board of the aircraft as set out in the international Open Skies Treaty.
This will be the 36th survey flight this year made by Russian specialists over the territories of the Open Skies Treaty member states. Russia ratified the treaty in May 2001.
The Open Skies Treaty, which entered into force on January 1, 2002, establishes a regime of unarmed aerial observation flights over the territories of its 34 member states to promote openness and the transparency of military forces and activities.
Posted by Steve Douglass at 1:14 PM No comments: