US embassies and consulates across the Middle East and Asia will be closed on Sunday due to an al-Qaeda-related terror threat, officials said Thursday.

Diplomatic posts in Israel, Egypt, Iraq and Afghanistan are among those that will be shut for at least one day, according to an NBC News report.

The US has been “apprised of information that out of an abundance of caution and care for our employees and others who may be visiting our installations, that indicates we should institute these precautionary steps,” said State Department spokeswoman Marie Harf.

She added that the closures may be extended, “depending on our analysis.”

Messages alerting US citizens of the closures went out in Afghanistan, Bahrain, Bangladesh, Egypt, Iraq, Israel, Kuwait, Libya, Oman, Qatar, Saudi Arabia, Yemen and the United Arab Emirates, according to the report.

US officials said the threat appeared to have originated somewhere in the Middle East, and that it was aimed at overseas diplomatic posts, not at facilities inside the US.
Posted by Steve Douglass at 3:44 PM No comments:

J-20 may become carrier based fighter 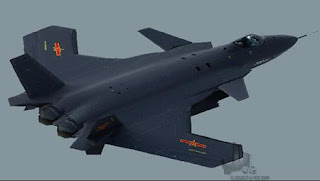 CHINA TIMES: The Chengdu J-20, China's first stealth fighter, may be modified into a carrier-based fighter for the PLA Navy with the new name of Linglong, the nationalistic tabloid Global Times said on July 27.
After the J-15 fighter completed landing and take-off exercises from the deck of the aircraft carrier Liaoning, the PLA Navy reportedly felt this third-generation fighter would be unable to compete with US stealth fighters such as the F-35 and that the J-20, still in development, may become the model for the country's first stealth carrier-based fighter.
A source within the Chinese aviation industry said the J-20 may be modified into a carrier-based fighter with swept-forward wings like the Russian-built Su-47. If this suggestion is accepted by the PLA, the Linglong will probably become the first carrier-based fighter with such a design.
Getting a little ahead of itself, Global Times said the Linglong is definitely the first challenger to US naval aviation since 1944.
Posted by Steve Douglass at 6:14 AM No comments: