YEONPYEONG ISLAND, South Korea (AP) - A defiant flash of North Korean artillery within sight of the island that it attacked this week sent a warning signal to Seoul and Washington: The North is not backing down.

The apparent military drill Friday came as the top U.S. commander in South Korea toured Yeonpyeong island to survey the wreckage from the rain of artillery three days earlier. As a U.S. nuclear-powered aircraft carrier headed toward the Yellow Sea for exercises next week with South Korea, the North warned that the joint maneuvers will push the Korean peninsula to the "brink of war."

South Korea's government, meanwhile, struggled to recoup from the surprise attacks that killed four people, including two civilians, and forced its beleaguered defense minister to resign Thursday. President Lee Myung-bak on Friday named a former chairman of the Joint Chiefs of Staff to the post.

Tensions have soared between the Koreas since the North's strike Tuesday destroyed large parts of Yeonpyeong in a major escalation of their sporadic skirmishes along the disputed sea border.

READ THE FILL STORY HERE
Posted by Steve Douglass at 6:08 PM No comments: 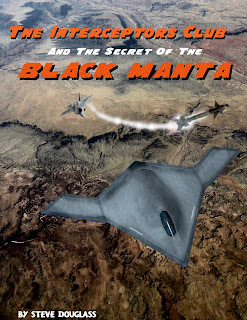 My first e-book is available for download as an e-book-html and in many other formats (including adobe pdf for easy reading on your desktop, laptop PC or ebook reader.

Think "Sneakers" meets "The Hardy Boys", Static and his rag-tag gang of teen techies are tricked into hacking into and stealing the prototype of an unmanned stealth warplane.


Somewhere in the wilds of New Mexico, at a secret air base, they have built the ultimate unmanned stealth warplane.

It is invisible on radar.

It can fly rings around any fighter jet.

It can fly above Mach 6.

It is armed with exotic pulse-weaponry...

... and it is in the hands of a spy who wants to sell it to North Korea.

It is the Interceptors Club mission to get "The Black Manta" back.

That's the premise behind my novel, The Interceptors Club and the Secret of The Black Manta, a work of fiction, loosely based on my many years of actual experience "stealth chasing" for publications such as Aviation Week & Space Technology Magazine, Popular Science and Aircraft Illustrated.

From young readers and adults, no matter your age, you will like The Interceptors Club & the Secret of the Black Manta.

It is a fun, intriguing and wild trip into the Black World where five teenage hackers go toe-to-toe with real spies, playing by adult rules.

From page one, you’ll be immersed in a shadow-world that exists secretly, right alongside this one, filled with dark sinister characters, stealth technology and hidden radio-waves that carry on them secret messages for espionage agents hiding in plain sight.

The Interceptors Club & the Secret of the Black Manta is a character-driven, techno-thriller for our times.

It’s also a great book for sons and their dads.

No vampires or witches- but a cool -techie-tale - intended to get young men reading again.
Think - Bourne Identity meets Sneakers - Hardy Boys meets Real Genius - Tom Clancy meets Wargames -and you’ll get The Interceptors Club and the Secret of The Black Manta!


So follow the link to SMASHWORDS and order the book. Make sure on checkout you use the coupon code listed below so it will only cost you a buck. But don't drag your heels - this special price expires December 1st.

REVIEWS
Posted by Steve Douglass at 8:21 AM No comments: