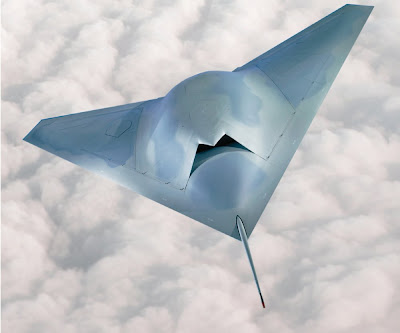 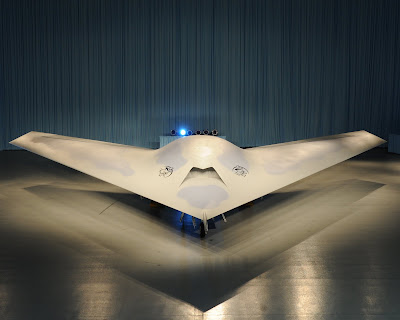 Boeing will put its Phantom Ray flying wing into the air before the end of the year.
The aerospace giant says that the unmanned aerial vehicle, unveiled at Boeing's St. Louis facility on
Monday, is on track to make its first flight in December.

The Phantom Ray will be a testbed for unspecified "advanced technologies," and in a press release Monday, Boeing rattled off an array of potential missions for the aircraft, from the now standard UAV tasks of recon and surveillance to aerial refueling, electronic attack, and the menacingly vague "strike." (A separate Boeing feature on the Phantom Ray makes reference to a potential "hunter/killer" mission, which would put it in the same category as the MQ-9 Reaper already in use by the U.S. Air Force.)

Leading up to the planned December flight will be a summer schedule of taxi tests. The debut flight for the one-off prototype aircraft will be followed, Boeing said, by up to nine more flights over the ensuing six months.

"The initial flights will take Phantom Ray through its paces for the flight test profile. Beyond that, the missions and systems tested will be determined by future warfighter needs," said Craig Brown, Phantom Ray program manager for Boeing, in a statement. 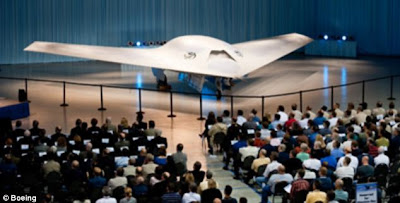 Boeing is touting the UAV as an example of the ability of its Phantom Works unit to do rapid prototyping, and it's also funding the project internally. A feasibility study took place in spring 2008, and the program got the green light in the fall of that year, the company said. Of course, they had something of a head start--the Phantom Ray design is derived from that of the X-45C experimental aircraft, part of the Defense Department's J-UCAS effort in which Boeing was participating. 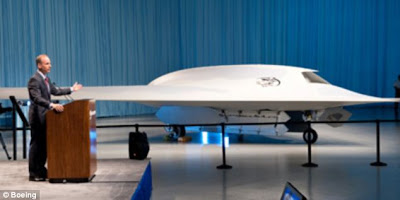 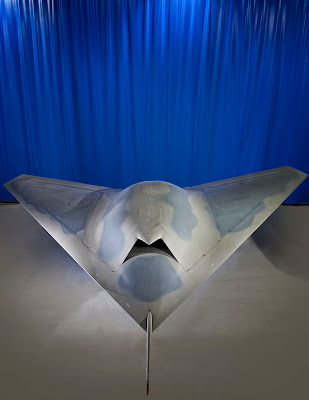 Posted by Steve Douglass at 6:18 PM No comments: 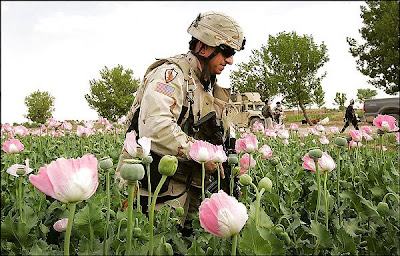 BBC NEWS:
A serious disease is affecting opium poppies in Afghanistan, Antonio Maria Costa, the head of the UN Office on Drugs and Crime (UNODC) has said.
Mr Costa told the BBC that this year's opium production could be reduced by a quarter, compared with last year.

He said the disease - a fungus - is thought to have infected about half of the country's poppy crop. Afghanistan produces 92% of the world's opium.
Mr Costa said opium prices had gone up by around 50% in the region.
That could have an impact on revenues for insurgent groups like the Taliban which have large stockpiles of opium, he told the BBC's Bethany Bell.

The fungus attacks the root of the plant, climbs up the stem and makes the opium capsule wither away.

It was affecting poppies in the provinces of Helmand and Kandahar, the heartland of opium cultivation and the insurgency in Afghanistan, he said.
Nato 'blamed'

But farmers in Afghanistan are unsure about what is damaging their crops.
Some believe Nato troops are responsible for the outbreak, but Mr Costa denied that this was the case.

"I don't see any reasons to believe something of that sort," he said. "Opium plants have been affected in Afghanistan on a periodic basis."
Farmer Haji Mohammad in Nawzad told the BBC that he had seen a dramatic reduction in the amount of opium he was able to harvest. He described the fungus as an "aerial spray".

He said that last year he harvested 450kg (990lb) of opium - but this year he had so far only been able to harvest 4kg.
"[It]... has affected my wheat cultivation and my chickens and other animals as well," he said.
"The powder sprayed has a white colour and I think it is chemical and if you squeeze it in your hand, water comes out of it."

A number of farmers in southern Afghanistan told the BBC they observed a white substance on their crops. They also reported extensive crop damage and also that livestock had been affected.
Opium economy

Mr Costa said this was an opportunity for the international community to bring in support to try to persuade farmers to turn away from planting opium.
He said the amount of opium produced by one hectare (2.47 acres) had almost doubled to 56kg (in the five years to 2009.

"Nature really played in favour of the opium economy; this year, we see the opposite situation," he added.

Mr Costa said that farmers now grew opium poppies in only five or six Afghan provinces, as opposed to all 34 five years ago.

Posted by Steve Douglass at 2:00 PM No comments:

A message from the author of this Blog.

Soon you will be able to buy my first work of fiction, The Interceptors Club & The Secret of the Black Manta direct from the author at this LINK.

If you are as intrigued by the black world, Area 51, and secret stealth projects as I am, I know you'll find my book a good read.

Although I envisioned it as a book for young adults and tweens, even if you are an adult I think you will find it enjoyable.

The novel is loosely based on my own stealth-chasing experience with a good fictional-action-based narrative pulling it all together. Although a fictional account, much of what you will read is based on real-covert military technology.

Other books I've read with a similar themes have been written by outsiders-and border on the fantastical. If you are looking for a book on Area 51 and aliens- then The Interceptors Club & The Secret of the Black Manta it is not for you.

The best way to describe it is, it is Tom Clancy meets The Hardy Boys or Sneakers meets Real Genius.

I hope you'll consider buying it and know your purchase helps fund a starving and striving author who has dedicated the last thirty years researching the mysterious world of covert military aviation.

Thanks for your consideration and continued support of this blog!

READ ABOUT THE AUTHOR HERE
DOWNLOAD THE FIRST 100 PAGES HERE

Read: Phil Patton's STEALTH WATCHERS Here. The article that started it all.

CNN) -- Pirates in the Gulf of Aden hijacked a chemical tanker carrying a crew of 15 Bulgarians on Tuesday, the European Union Naval Force Somalia said.
The Bulgarian-flagged tanker, the MV Panega, was about 100 nautical miles east of Aden, Yemen, en route from the Red Sea to India, the force said in a news release.

"As long as the pirates are on board the ship, we are just monitoring the situation," said Anders Kallin, a Swedish navy commander for the EU naval force. He said he had no reason to believe that anyone had been hurt.

The force's Operation Atalanta focuses on escorting merchant vessels carrying humanitarian aid for the World Food Programme and those of the African Union Mission in Somalia, protecting vessels in the Gulf of Aden and the Indian Ocean, and deterring and disrupting piracy.
Posted by Steve Douglass at 6:55 AM No comments:

CNN -- One person -- believed to be a 10-year-old boy -- survived a passenger plane crash in Libya that was feared to have killed more than 100 people, an official said Wednesday.
The boy was undergoing surgery at a hospital in the Libyan capital of Tripoli after the Afriqiyah Airways plane that left Johannesburg crashed as it neared the end of its flight.

The Dutch Foreign ministry said it had a representative at the hospital waiting to identify the boy, believed to be a Dutch national. He apparently suffered bone injuries.
The plane was carrying 93 passengers and 11 crew members when it crashed while trying to land at the Tripoli International Airport.

The president of the European Parliament said about 100 people perished, and Libya's state news agency said 96 bodies had been recovered.
Nicky Knapp, a representative of the Airports Company South Africa, provided the breakdown in the destinations of the passengers aboard: seven to London, 32 to Brussels, 42 to Dusseldorf, one to Paris, and 11 to Libya. She was speaking on behalf of Afriqiyah Airways.
The plane, an Airbus A330-200, was at the tail end of its nearly nine-hour-long flight when it crashed.

"We express our sincere regret and sadness on behalf of the airline. As well, we would like to express our condolences to the relatives and friends of those who had passengers on Flight 8U771 destined for Tripoli late last night, due to arrive around 6 o'clock this morning," she said.

Calling the incident a tragedy, Jerzy Buzek, the president of the European Parliament said "some 100 people have died no doubt from many countries around the world."
He said the child's survival "given this tragic event, is truly a miracle."
The Dutch Royal Touring Club said 61 of 62 Dutch passengers on the plane died.

A Dutch Foreign Affairs Ministry spokeswoman said the government was trying to get more information about those aboard.

The British Foreign Office said it was looking into whether British nationals were on board the flight.
At the crash site, workers with surgical masks combed through the smoldering wreckage that spilled over a large area. A wheel lay atop a pile of bags. Two green airline seats sat upright and intact amid burned parts of the aircraft.

Officials recovered the plane's flight data recorder, which investigators use to piece together a flight's last minutes.

The Tripoli-based Afriqiyah (Arabic for "African") operates flights to four continents. The planes in the fleet carry the logo 9.9.99 -- the date when the African Union was formed.
The Airbus that crashed is one of three Airbus 330-200s that the airline owns.
Posted by Steve Douglass at 6:50 AM No comments: