Altus tanker diverts to Amarillo after declaring an emergency. 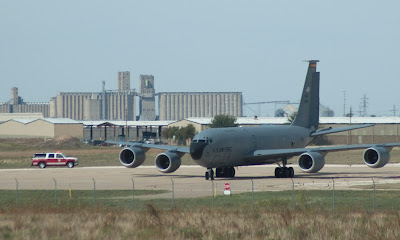 A KC-135 tanker from Altus AFB declared an in-flight emergency and diverted to Amarillo after its' stabilizer froze up during an aerial refueling mission over the Texas Panhandle.

Speaking under conditions of anonymity the pilot said "This was the second time today the stabilizer froze. The first time iit was temporary - the second not so much." The stabilizer is the large movable surface on tail the aircraft that steers the plane.

If for any reason the stabilizer becomes locked, the aircraft can be steered by using wing flaps and engine thrust.

However, steering the large aircraft in this manner is not ideal. Turns have to be wide and very slowly. GASSER 13 declared an in flight emergency and was diverted to Amarillo. The airspace was cleared as the large aerial refueling tanker made wide turns to line up with the long runway 22 at Rick Husband Int Airport. AFD was called out to meet the tanker (which was filled with jet fuel)as a precautionary measure.

The KC-135 landed safely and without incident will be spending a few days in Amarillo, awaiting a crew from Altus AFB, in southwest Oklahoma, to repair the problem.

Posted by Steve Douglass at 7:05 AM No comments: