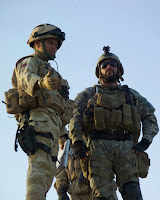 The joint force attacked a compound north of the capital of Uruzgan province where the militants were hiding Saturday evening, sparking the fighting, police spokesman Mohammad Musa said. He said no Afghan police or international troops were killed.In eastern Kunar province, meanwhile, one civilian was killed and five wounded when shelling from a gunbattle between insurgents and Afghan and international forces hit a house.Provincial Police Chief Gen. Abdul Jalal Jalal said everyone in the house initially survived Saturday’s blast, but one man died from his injuries after being rushed to a hospital. Jalal said it was unclear which side fired the shots that hit the house.Also Saturday, at least six police officers were killed by roadside bombs — two in southern Helmand province and at least four south of Kabul in Logar province, officials said.

In Logar, the officers were driving in a private car in Charkh district when the explosion hit, said provincial police chief Gen. Mustafa Mosseini.NATO forces, who secured the site and treated one wounded officer, said in a statement that four police were killed. Mosseini said five officers died.The bombing in Helmand took place Saturday night in Lashkar Gah, the provincial capital, killing two police and wounding three, said Dawood Ahmadi, the governor’s spokesman.Police officers are regular targets of Taliban and other insurgents in Afghanistan. Mosseini said the officers had been traveling in a civilian car in order to avoid drawing the attention of potential attackers.In another gunbattle in eastern Paktia province between insurgents and Afghan police, two militants and one police officer were killed, said Rahullah Samon, a spokesman for the governor.———Associated Press writer Amir Shah contributed to this report from Kabul."

Posted by Steve Douglass at 8:12 PM No comments:

Iraqi crews ‘ready to go’ on mission: "Airmen deployed to Iraq are teaching their Iraqi counterparts to fly airstrike missions.Today, after fewer than a dozen training flights, two Iraqi aircrews — a pilot and a mission-sensor operator make up an aircrew — are qualified to fire Hellfire missiles from AC-208B Caravans, a military version of the single-engine turboprop Cessna Grand Caravan utility airplane. A third aircrew is in training.‘They are ready to go,’ said Lt. Col. Christopher Spigelmire, an F-15 Eagle pilot and commander of the 521st Air Expeditionary Advisory Squadron at Kirkuk Air Base, Iraq.All that is keeping the Iraqis from flying combat sorties are both Iraqi and U.S. military leaders working out rules of engagement such as how strikes will be coordinated with ground commanders, Spigelmire said.

Not unexpectedly, the Iraqi aircrews want to fly and fight — now.‘Yes, of course we want to have weapons to stop the terrorists,’ said Iraqi Col. Mustafa, commander of Kirkuk’s Squadron 3, the unit flying AC-208Bs.The Iraqi airmen had already flown reconnaissance sorties in C-208Bs equipped with cameras. Qualifying them to fly with Hellfire missiles took eight to 11 training flights, including night sorties and Hellfire launches.The Hellfire training parallels the upgrade instruction U.S. crews go through as new weapons are added.As the strike mission grows and new officers arrive, Iraqi airmen will go directly into the AC-208B, Mustafa said.The Iraqi weapons loading and maintenance aircrews are primarily enlisted airmen overseen by young officers, Mustafa said. All started with no experience.‘This is the first time they are dealing with a weapon,’ he said.Because of its light weight — 250 pounds — and laser targeting system, the Hellfire is the missile of choice for small aircraft. The Air Force launches Hellfires from MQ-1 Predator and MQ-9 Reaper UAVs. Army helicopters also fly with Hellfires.

The success of the 521st and Squadron 3 is key in determining the Air Force’s long-term role in Iraq. Until the Iraqi military can mount airstrikes on its own, Air Force planes and Army helicopters will get the calls to fly close-air support missions.So far, the primary mission for Iraqi aircrews has been airlift, including C-130 Hercules donated by the U.S. and reconnaissance with no capability to fire on targets when insurgents are spotted.Beyond the AC-208B, the Iraqi government wants to buy F-16 Fighting Falcons, Iraqi officials have said.Working with the Iraqis at Kirkuk are about 25 airmen, including weapons crews, maintainers, rated aircrew members and three pilots, Spigelmire said.

All are volunteers on yearlong tours.The squadron’s earlier mission at Kirkuk was to train Iraqi airmen to fly reconnaissance missions.‘That part of the advisory mission is over,’ he said.The 521st phased itself out of reconnaissance as Iraqi airmen took over the training.Eventually, Iraqi airmen will take over Hellfire training.‘My job is to work myself out of a job,’ Spigelmire said.AC-208B facts* Length: 42 feet* Wing span: 52 feet* Maximum speed: About 200 mph* Range: About 1,000 miles."

Posted by Steve Douglass at 8:12 PM No comments:

Obama seeks review of reputed Afghan mass grave: "WASHINGTON — President Barack Obama has ordered his national security team to investigate reports that U.S. allies were responsible for the deaths of as many as 2,000 Taliban prisoners of war during the opening days of the war in Afghanistan.Obama told CNN in an interview that aired Sunday that he doesn’t know how the U.S.-allied Northern Alliance behaved in November 2001, but he wants a full accounting before deciding how to move forward.‘I think that, you know, there are responsibilities that all nations have even in war,’ Obama said during an interview at the end of a six-day trip to Russia, Italy and Ghana.‘And if it appears that our conduct in some way supported violations of the laws of war, then I think that, you know, we have to know about that.

’The president’s comments seem to reverse officials’ statements from Friday, when they said they had no grounds to investigate the 2001 deaths of Taliban prisoners of war who human rights groups allege were killed by U.S.-backed forces.Reacting to the interview, Physicians for Human Rights hailed Obama’s decision.‘President Obama is right to say that U.S. and Afghan violations of the laws of war must be investigated,’ said Nathaniel Raymond, a Physicians for Human Rights researcher. ‘If the Obama administration finds that criminal wrongdoing occurred in this case, those responsible — whether American or Afghan officials — must be prosecuted.’But Obama’s direction — discussed as he toured a former slave castle on Ghana’s coast — does not guarantee action.‘We’ll probably make a decision in terms of how to approach it once we have all the facts gathered up,’ Obama said.The mass deaths were brought up anew Friday in a report by The New York Times.

It quoted government and human rights officials accusing the Bush administration of failing to investigate the executions of hundreds, and perhaps thousands, of prisoners.U.S. officials said Friday they did not have legal grounds to investigate the deaths because only foreigners were involved and the alleged killings occurred in a foreign country.The Times pointed to U.S. military and CIA ties to Afghan Gen. Abdul Rashid Dostum, accused by human rights groups of ordering the killings. The newspaper said the Defense Department and FBI never fully investigated the incident.

The allegations date back to November 2001, when as many as 2,000 Taliban prisoners died in transit after surrendering during one of the regime’s last stands, according to a State Department report from 2002.Witnesses have claimed that forces with the U.S.-allied Northern Alliance placed the prisoners in sealed cargo containers over the two-day voyage to Sheberghan Prison, suffocating them and then burying them en masse, using bulldozers to move the bodies, according to the State Department report.

Some Northern Alliance soldiers have said that some of their troops opened fire on the containers, killing those within.

Dostum, the Northern Alliance general who is accused of overseeing the atrocities, has previously denied the allegations. He was suspended from his military post last year on suspicion of threatening a political rival, but Afghan President Hamid Karzai recently rehired him.Related reading* Pentagon: No grounds to examine Afghan deaths"

Posted by Steve Douglass at 8:11 PM No comments: 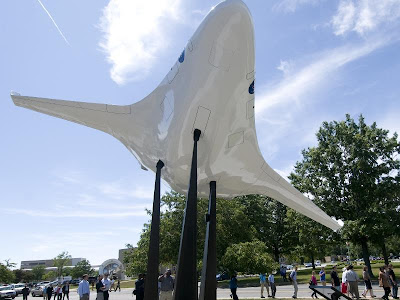 NASA's Glenn Research Center dedicated a model of the hybrid wing body, a futuristic aircraft concept, on July 8, 2009. The center is testing parts of a new propulsion system that can be embedded in the wing of the airplane. Developed by NASA and Boeing, the plane is called a hybrid wing body because its wings and fuselage blend together in a triangular shape. The concept could revolutionize air travel because of its potential to increase fuel efficiency, while reducing noise and emissions.

Officials at NASA's Kennedy Space Center in Florida have called off today's liftoff of space shuttle Endeavour due to inclement weather. Cumulus clouds and lightning violated rules for launching Endeavour because of weather near the Shuttle Landing Facility. The runway would be needed in the unlikely event that Endeavour would have to make an emergency landing back at Kennedy.

Posted by Steve Douglass at 8:06 AM 4 comments:

Posted by Steve Douglass at 8:04 AM No comments:

KENNEDY SPACE CENTER, Florida (CNN) -- NASA began preparing for a launch of space shuttle Endeavour on Sunday, a day after liftoff was postponed over concerns of possible effects from a lightning storm.

"The forecast is 70 percent 'go' for liftoff," the space agency said on its Web site.

Endeavour had been scheduled to take off at 7:39 p.m. Saturday.