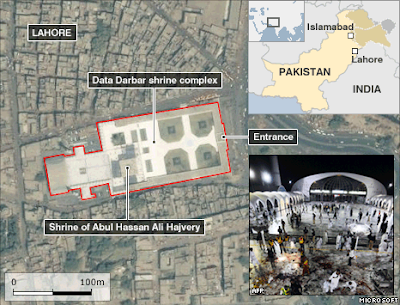 Police are on high alert across Pakistan after a deadly suicide attack on a Sufi Islamic shrine in the eastern city of Lahore.

Security has been increased in Lahore and at Sufi shrines across the country, after 42 people died at the Data Darbar shrine on Thursday.

Protesters have demonstrated outside the shrine, in anger at what they say were lax security measures.

Wider demonstrations are expected for later in the day, after Friday prayers.

No group has yet said that it carried out the attack, but the finger of blame is being pointed at the Taliban.

The type of target, a Muslim shrine, is unusual. There are some elements among Islamist extremists, including the Taliban, who believe that worshipping at the shrines of saints is un-Islamic, and this is one theory why this shrine was attacked.

There was another sectarian attack just over a month ago in Lahore in which 80 people died, when two mosques used by Ahmadi Muslims were hit by militants.

This could be a battle within a battle that the militants are having with the Pakistani state.

It is visited by hundreds of thousands of people each year from both Sunni and Shia traditions of Islam.

The impact of the two blasts ripped open the courtyard of the shrine. Rescuers had to clamber over rubble as they carried out the victims.

The first attacker struck in the underground area where visitors sleep and prepare themselves for prayer, officials said.

As people fled, a second bomber detonated his explosives in the upstairs area.

The bombers are thought to have used devices packed with ball-bearings to maximise the impact of their attack.

A volunteer security guard at the shrine described scenes of devastation.

"It was a horrible scene," said Mohammed Nasir. "There were dead bodies all around with blood and people were crying."


The attack is the biggest on a Sufi shrine in Pakistan since militant attacks began in 2001.

No group has said it carried out the attack, but correspondents say the attacks continue a growing trend among militants to target members of other sects as well as minorities.

The attack may also feed the pervading anti-American sentiment, a sense that US interference in the region is indirectly to blame, says the BBC's Jill McGivering.

Lahore has been hit by a series of bomb attacks, including a suicide blast at anti-terrorist offices in March, when at least 13 people died.

Earlier, security chiefs had been congratulating themselves after June was the first month in two years in which there had been no suicide bombings in Pakistan.

They said it was proof the militant networks had been disrupted.

In December the military said they had achieved victory, but subsequent reports have suggested the militants remain active in the region.
Posted by Steve Douglass at 8:10 AM No comments: 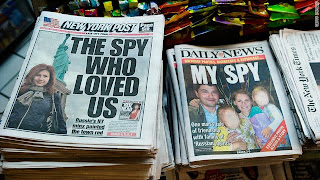 London, England (CNN) -- The former husband of alleged Russian spy Anna Chapman said her personality changed after she started having "secretive meetings" with Russian friends a few years ago.

Alex Chapman told The Daily Telegraph newspaper he "hardly knew her anymore" after she became involved with shadowy contacts.
Anna Chapman also confided to her husband that her father, Vasily, had been a senior KGB agent.

The Chapmans met at a London rave or party in 2001, when Alex Chapman, then 21, saw her across the dance floor and told her she was "the most beautiful girl" he had ever seen. She was 19.
They married six months later.

Her "carefree" bohemian lifestyle soon changed, however, he told the paper, and she became obsessed with money and moving to America.


"It was like someone having a midlife crisis, but in their 20s," Chapman told the paper. "She would arrange to go out, but when I said I would join her, she told me not to bother because they would all be speaking Russian. She was adamant I wasn't to meet them."

Chapman said he had suspicions she was being "conditioned" by shadowy contacts by the time their marriage broke down in 2005.

"She had never been materialistic during the years we were together, but in 2005 and 2006, after she started having these meetings with people she referred to as 'Russian friends,' she was transformed into someone with access to a lot of money, boasting about all the influential people she was meeting."

There was such a "dramatic change" in her thoughts and behavior that "I felt I hardly knew her anymore," he said.

Chapman is one of 10 suspects arrested this week in the States as part of an alleged Russian spy ring. She was denied bail and has her next hearing July 27.
The suspects were "trained Russian intelligence operatives," a U.S. Justice Department spokesman said, and information from court documents alleged they were part of a mission to plant "deep-cover" agents in the United States.

The Justice Department said the suspects were supposed to recruit intelligence agents, but were not directly involved in obtaining U.S. secrets themselves. They were charged with acting as agents of a foreign government, and nine also were charged with conspiracy to commit money laundering.

The case resulted from a "multiyear investigation" conducted by the FBI, the U.S. Attorney's Office for the Southern District of New York and the Justice Department's National Security Division, according to a Justice Department statement.
Chapman and another suspect, Mikhail Semenko, allegedly conducted the private wireless computer links to communicate with a Russian government official, one court document alleged. In one instance, Chapman was in a bookshop and the Russian government official drove by in a van to make the wireless connection, the document said.

Wednesday, a Security Service officer visited Alex Chapman at his current home in Bournemouth, England, to question him about his ex-wife, the Telegraph reported. The officer wanted to know whether Anna Chapman could have been recruited in London or even spied on Britain while she lived there, the paper said.

Alex Chapman met his former father-in-law for the first time during the couple's delayed honeymoon to Africa in 2002, he said."

Her dad was scary," he said. "He was very concerned about which direction my life was going, how I was going to earn my money. Anna told me he worked as a diplomat for the Russian government. It was only much later that she told me he had been a KGB agent."
The Chapmans remained close after their divorce in 2006, the Telegraph reported, and Alex

Chapman "watched with bemusement" as his former spouse achieved success in America.
"She had always said she didn't like America," Chapman told the paper. "She didn't like their accents and would always imitate them when American TV shows were on.
"In late 2006 she went back to Russia and said she was staying there for good, but then all of a sudden she wanted to go to America. She started seeing a very rich American guy who took her to the States, and when she came back, she said she loved it."
Anna Chapman told her ex-husband she was having trouble making her Internet real estate agency a success, he said, but the business suddenly flourished last year and she was employing 50 people.

"Clearly a lot of money had been pumped into the business from somewhere, but I couldn't work it out," he said.
Anna Chapman "seemed distant" when he last spoke to her four weeks ago, Alex Chapman told the paper.

"I thought I knew her, but she has taken this path I don't believe she consciously knew she was going down," he said. "I believe in my heart there has been some sort of influence on her, some sort of conditioning. Then, when push came to shove, she found herself in a situation she couldn't get out of."
Posted by Steve Douglass at 6:30 AM No comments: