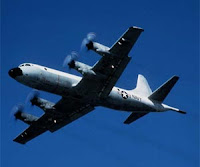 A crew member broke an ankle, but the rest of the crew survived the Tuesday crash. The military’s statement does not give further details on who was onboard the aircraft.

The plane was destroyed.

The military says it is investigating the accident.
Posted by Steve Douglass at 3:32 PM No comments:

Retired Air Force pilot Milton Torres said he flew his F-86D Sabre fighter jet with orders to shoot down a UFO in 1957 hovering over the British countryside that he said looked like an “aircraft carrier” on his radar screen.

Torres — who retired as a major — said the aircraft raced away from his position at ten times the speed of sound before his jet armed with 24 missiles could reach it and he could catch a glimpse of it.

He’s speaking publicly about his encounter for the first time after the British government recently declassified dozens of UFO military reports.

Torres kept silent about it for more than 50 years after a man he’d never seen before threatened to revoke his flying privileges and end his Air Force career if he talked about the mission to shoot down the UFO.

“The man that visited me told me in no uncertain terms to keep quiet. He told me I would lose my pilot’s license and it would be the end of my flying days, so for 30 years I’ve said nothing,” said Torres, who assumed the man was from the U.S. National Security Agency.

Torres was assigned to the 406th Fighter Interceptor Wing at Royal Air Force Base at Manston in the United Kingdom. His unit stood alert prepared to fly missions against an attack from the Soviet Union.

The British Ministry of Defense did an investigation into the event in 1988 claiming the “bogus” radar blip was due to “adverse weather conditions” or “an experiment in electronic warfare,” according to a recently declassified report.

The British investigative agent wrote that Torres could have been used as a “guinea pig” to see if a manufactured radar blip as part of electronic warfare experiment appeared realistic to the American pilot.

However, the agent questions in his report why the government can not confirm that it was not a UFO even if the test remains highly classified.

“If the event was part of what was then part of a Top Secret military exercise and is still Top Secret perhaps you would simply say so and confirm that whatever was involved it was not an unidentified flying object,” the report read.

After he retired from the Air Force in 1971, Torres taught engineering classes at Florida International University and now lives in Miami. Torres, 77, said he is still waiting on an official explanation, but is convinced the aircraft he saw on his radar screen was not of this world.

“This thing had to be going double-digit mach making turns that I didn’t think were possible, breaking all the rules of physics,” he said.
Posted by Steve Douglass at 5:20 AM No comments: