We had fun tonight - out in the "toolies" with the "mulies" watching the IFOs fly by. Here's some video. It doesn't quite capture how cool it was though.
-Steve


It was another beautiful pass. Should be even better tomorrow night. Both should fly directly overAamrillo starting from the southwest to the NE with the flight path going slightly west of town. 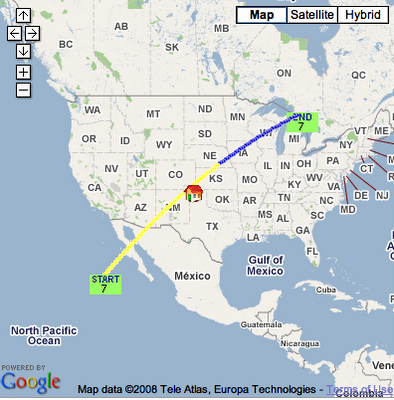 Posted by Steve Douglass at 8:17 PM No comments:

Researchers here are developing new, handheld, wireless radios fitted with a single processor chip that is embedded with algorithms for compressing as many as 5 simultaneous, stealthy conversations into the same time and frequency slot and then, on arrival, untangling them.

Equally importantly, while in transit messages and data packages are seemingly hopelessly mixed - to the point of sounding like static. The chance of intercepting even the digital gibberish is unlikely since foes or potential adversaries don’t have the receiver technology to sort through such high levels of interferences.

Researchers are rethinking something called the ‘interference avoidance’ paradigm. Roughly, when two or more messages or data packets using the same frequency collide, both are ‘killed’. A standard receiver can’t pull the two messages apart, so they are discarded and have to be retransmitted, thereby slowing transmission rates. Another way to avoid interference is to use frequency allocation, however that bans use of the assigned frequency by anyone else, even if there is very little traffic, and ‘creates a logistics nightmare,’ says Joshua Niedzwiedcki, manager of BAE System’s communications and signal exploitation R&D group.

Those limits to frequency use create huge problems when operating with coalition forces because there isn’t enough bandwidth to go around. Often, much of the spectrum remains off limits to our allies because the U.S. has already taken it which leaves them using marginal channels with lots of interference. (AW&ST, Oct. 13, p.62)

Communication specialists want to develop ‘small UAVs that broadcast streaming video of an area to everybody,’ Niedzwiedcki says. ‘The guy on the ground can get that picture in real time on his hand-held radio. He then knows what’s over the hill or around the corner. The biggest challenge to that scenario is that today UAVs can’t talk to each other because there’s not enough spectrum to hear one another because their signals interfere with each other. But with DIMA, we can probably triple the number of UAVs that can operate near each other in situational support missions.’

Researchers expect to reduce the radio to brick size using three Field Programmable Gate Array processor chips that will allow them to transmit up to 4-5 times the volume of voice, data and video in a 20 node network. Added processing capability will allow the identification of more advanced signals - by recognizing protocols, software and firmware - as well as the ability to pull apart signals in a higher interference environment.

They also are working to discover what’s necessary and what’s not, allowing them to take computing short cuts and use new techniques to increase performance and efficiency. Such advances in signal processing have allowed researchers to reduce the amount of ‘overhead’ or needless digital instruction in the protocol that is not voice traffic. ‘Protocol overhead’ as part of the total message has decreased to 20% from 50%. That is a key strategy for freeing room for more transmissions. Phase three is to conclude in June with demonstration of up to a 20-radio network. By the end of 2010, researchers expect to have completed design and implementation of a full-waveform protocol and hardware for a brick-size radio.

Posted by Steve Douglass at 8:15 PM No comments:

Posted by Steve Douglass at 8:14 PM No comments:

The IDF recently acquired an advanced system capable of pinpointing rocket-launching crews and hitting them, Israel Radio reported Monday. The system, an airborne observation blimp, hovers at a height of up to one kilometer and can work during daylight and during the night. It is equipped with both cameras and radars and is operated from the ground.

It is capable of acquiring short-term intelligence, such as the location of terrorists and rocket launchers in a short time, which can then be delivered to combat troops almost in real time. It is also capable of following troop movements thus alerting them to dangers within their radius.

Posted by Steve Douglass at 5:17 AM No comments: