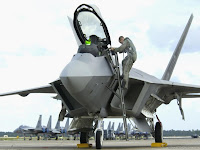 All F-22 Raptors at Langley Air Force Base in Virginia have been grounded after a pilot experienced loss of oxygen while flying.

Air Force officials are meeting on Friday to determine whether it is necessary to extend the grounding to the rest of the F-22 fleet. The pilot experienced what is known as "hypoxia," and had to return to base.

America's premier fighter jet has experienced similar problems in the past, though it is not clear what is causing the problem. The Air Force last month brought the jets back into service after a grounding months earlier over oxygen issues.

"There is no conclusive cause or group of causes that has been established for the incidents that prompted the stand down earlier this year," the Air Force said in a statement Friday.
While the Air Force is again using F-22s, the statement said officials are making improvements and pausing when needed.

"Part of our protocol is to allow units to pause operations whenever they need to analyze information collected from flight operations to ensure safety. That is what is happening at Langley at the moment, and we support that decision," the statement said.


R
Posted by Steve Douglass at 8:08 PM No comments: