By Ishtiaq Mahsud - The Associated Press
Posted : Monday Oct 27, 2008 21:01:44 EDT
DERA ISMAIL KHAN, Pakistan — Suspected U.S. missiles killed 20 people at the house of a Taliban commander near the Afghan border on Monday, the latest volley in a two-month onslaught on militant bases inside Pakistan, officials said.

Missile attacks have killed at least two senior al-Qaida commanders in Pakistan’s wild border zone this year, putting some pressure on extremist groups accused of planning attacks in Afghanistan — and perhaps terror strikes in the West.

However, a marked uptick in their frequency has badly strained America’s seven-year alliance with Pakistan, where rising violence is exacerbating economic problems gnawing at the nuclear-armed Islamic republic’s stability.

The reported missile strike occurred in South Waziristan, part of a belt of tribally governed territory considered a possible hiding place for Osama bin Laden and al-Qaida No. 2 Ayman al-Zawahri.

Two intelligence officials, speaking on condition of anonymity because they are not authorized to speak to media on the record, said the targeted house in Mandata Raghzai village belonged to a lieutenant of local Taliban chief Maulvi Nazir.

The officials cited reports from agents and informers in the area. They said the identity of as many as 20 bodies pulled from the rubble was not immediately clear.

Mohammad Noor Wazir a resident of a nearby village, said he watched from a distance as militants surrounded the scene and loaded at least 15 corpses into vehicles that drove away.

Three other victims were buried in the village cemetery, including a brother of the owner of the destroyed house, Wazir told The Associated Press by telephone.

American commanders complain that Pakistani forces have not put enough pressure on militant strongholds on their territory.

In a reflection of that frustration, U.S. military and CIA drones that patrol the frontier region are believed to have carried out at least 15 strikes since mid-August. The United States rarely confirms or denies involvement.

Pakistan’s new leaders have protested the missile strikes — as well as a highly unusual raid by helicopter-borne commandos in September — as unacceptable violations of their sovereignty.

In a resolution adopted Monday, Pakistani senators condemned the U.S. drone attacks, saying they caused “immense” loss of life and were undermining Pakistan’s efforts to defuse militancy through dialogue.

The government should take “more effective measures” to stop such attacks, it said, without recommending any specific action beyond official protests to Washington and NATO.

In other violence on Monday, a car bomb exploded in a parking lot in the frontier city of Quetta, killing a rickshaw driver and another unidentified person and injuring 10 others, while the army said it killed 10 militants in the troubled Swat valley.

Pakistan’s military is involved in heavy fighting with militants in the Bajur region as well as in Swat. It claims to have killed 1,500 insurgents in a two-month offensive in Bajur that has drawn U.S. praise.

Yet many Pakistani are weary of a war they believe is being fought at America’s behest and the government has offered to negotiate with any militant group willing to renounced violence.

“There is an increasing realization that the use of force alone cannot yield the desired results,” Pakistani Foreign Minister Shah Mehmood Qureshi told a gathering of Pakistani and Afghan tribal elders.

The meeting in Islamabad was part of a dialogue process begun last year in hopes that it could ease often strained relations between Pakistan and Afghanistan.

Afghan President Hamid Karzai has repeatedly accused Pakistan, which backed the Taliban takeover of Afghanistan prior to the Sept. 11, 2001 attacks on America, of secretly continuing to aid the militants as a way to exert influence over its poorer neighbor.

Pakistan denies the charge. However, it has also seized on recent indications that Afghanistan’s government is also seeking talks with the Taliban to press for compromise.

Associated Press writers Abdul Sattar in Quetta and Stephen Graham in Islamabad contributed to this report.
Posted by Steve Douglass at 8:21 PM No comments:

Captain Nemo, Your Ride Is Here

Captain Nemo, Your Ride Is Here: "

Stealth aircraft have been compared to submarines, and there are similarities between the two. Both depend on a smooth outside mould line for survival and carry their weapons internally, restricted by the ability to cut holes in the skin.

But then DCNS unveiled its SMX-24 concept for an advanced'submarine at the Euronaval show in Paris, and turned those presuppositions on their head.

SMX-24 is a concept for a submarine that would be in service about 2020. Its size and capability fall between today's biggest diesel-electric boats and the smallest nukes:' the 3450-ton boat would have'an all fuel-cell propulsion system, would be capable of 20 kt submerged and could stay underwater for 30 days. The core vessel would have'interchangeable modules for'weapons or special forces equipment. The stub wings'carry tip-mounted propulsors for high speeds - allowing the central pumpjet to be sized for cruise - and fighter-like pylons for fuel tanks - above the wings on the model'-'and weapons. '

SMX-24 is a concept at the moment - but for how long, in the fast-changing submarine world?' Last year at Euronaval, DCNS showed its SMX-23 concept for a small littoral submarine; it's here this year as a more detailed design named Andrasta, with'six heavy weapons outside the pressure hull, and no on-board reloads.

Posted by Steve Douglass at 4:54 PM No comments: 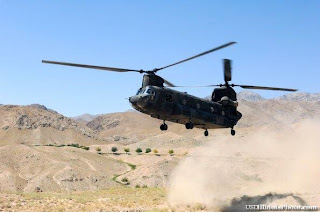 KABUL, Afghanistan (CNN) -- A U.S. helicopter was shot down in Afghanistan on Monday, but none of the 10 soldiers on board were killed, according to a U.S. military spokesman.


A U.S. Chinook helicopter, like the one pictured, has been shot down in Afghanistan.

The Taliban claimed that its fighters used a rocket-propelled grenade launcher to shoot down a U.S. Chinook helicopter in the Wardak province, about 30 miles (50km) west of Kabul.

Maj. John Redfield, a U.S. military spokesman, told CNN a coalition helicopter went down in the Wardak province after an exchange of fire with enemy on the ground.

All 10 soldiers on board were picked up and taken to safety, he said. He could not say if any were injured.

Meanwhile, a suicide bomber on Monday killed two soldiers and wounded three others in northern Afghanistan, a spokesman for the U.S. military in Afghanistan said.

The spokesman provided no further details. An Afghan official said the incident took place as U.S. officials gathered to meet with the police chief in Pul-e-Khumri in Baghlan province. One American soldier and an Afghan child were killed in the attack, Afghan officials said.

The Taliban claimed responsibility for the attack.
Posted by Steve Douglass at 5:40 AM No comments: