Electromagnetic Spectrum is now an official "domain of warfare"

WASHINGTON: Pentagon officials are drafting new policy that would officially recognize the electromagnetic spectrum as a “domain” of warfare, joining land, sea, air, space, and cyberspace, Breaking Defense has learned. The designation would mark the biggest shift in Defense Department doctrine since cyberspace became a domain in 2006. With jamming, spoofing, radio, and radar all covered under the new concept, it could potentially bring new funding and clear focus to an area long afflicted by shortfalls and stovepipes.

The new electromagnetic spectrum domain would be separate from cyberspace, although there’s considerable overlap between the two. “Wireless” is just another word for “radio.” Any wireless network relies on radio frequency transmissions that can be jammed bytraditional electronic warfare like any other RF device — or it can be hacked by wirelessly transmitted malware, in a hybrid of electronic and cyber attack. But the consensus among officials and experts seems to be that the electromagnetic spectrum world — long divided between electronic warriors and spectrum managers — is so technologically complex and bureaucratically fragmented by itself it must be considered its own domain, without trying to conflate it with cyberspace.

Cyber has certainly gotten more attention and, often, money than the electromagnetic spectrum. Would making the spectrum a domain fix that? It would not magically manifest the missing $2 billion a year the Defense Science Board says is needed to rebuild American electronic warfare capabilities such as jamming. Nor would calling the spectrum a domain somehow turn back the clock on the 20 years China and Russia have spent catching up while American electronic warfare largely stood still. Nor would it reduce the American military’s dependence on inherently vulnerable wireless networks for everything from commanding troops to sharing intelligence to flying drones to knowingexactly where we are.

But instead of trying to fix such complexly interrelated problems piecemeal, it would help to have a big picture endorsed at the highest levels of the Pentagon. No less a figure than Deputy Defense Secretary Bob Work has chartered an “electronic warfare executive committee” (EXCOM) to advance a “department-wide” approach to the problem.

I first heard of the draft “domain” policy almost in passing during a presentation last week to the Association of Old Crows, an electronic warfare group, by a contractor for Defense Department’s Chief Information Officer. “The policy…is in the works,” said Troy Orwan, a retired Air Force EW officer himself, “and in that policy we are going to ask the Secretary of Defense and the Chairman of the Joint Chiefs, to declare a sixth domain, EMS, to man, train, and equip.”

Yesterday, Pentagon CIO Terry Halvorsen confirmed in a statement to Breaking Defensethat his office “will be the Departmental lead for these efforts” to explore a wide range of policy options for the electromagnetic spectrum, “to include the potential recognition of the EMS as a domain.

READ MORE HERE
Posted by Steve Douglass at 11:23 AM No comments: 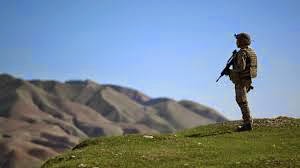 Carter told the House Armed Services Committee that over time, these special operators will be able to conduct raids, free hostages, gather intelligence and capture Islamic State leaders. Carter said that will improve intelligence and generate more targets for attacks.

Carter did not offer troop numbers amid a growing call from some Republicans for more U.S. boots on the ground and a divide among war-weary Americans about the prospect of greater military involvement. He said the number in the expeditionary force will be "larger" than 50 but would not be more specific and didn't say exactly where they would be based.

There currently are about 3,500 U.S. troops in Iraq, and President Barack Obama had previously announced he was sending fewer than 50 special operations forces to Syria.

Carter said the raids in Iraq will be done at the invitation of the Iraqi government and focused on defending its borders and building the Iraqi security force's own capacity. But the force also will be in position to conduct unilateral operations into Syria, he said.

Carter said the force might be American-only, but more likely would be a mixed force with perhaps Kurdish troops or others who are fighting the militants. He said the new force would conduct operations similar to ones executed earlier this year.

He said it will be a "standing" force, meaning it will be stationed in Iraq and prepared to operate at any time. He called it a "new way of achieving our objective" of defeating the Islamic State.

"And there will be more," Carter said, in coming months.

In October, U.S. special operations troops and Iraqi forces raided a compound in northern Iraqfreeing about 70 Iraqi prisoners who were facing execution. One American service member was killed in the raid, the first American combat death in Iraq since the U.S. began its counter-IS military campaign in August 2014. In May, a Delta Force raid in Syria killed IS financier Abu Sayyaf, yielded intelligence about the group's structure and finances, and his wife, held in Iraq, has been cooperating with interrogators.

Polling after the attacks in Paris and Beirut found Americans divided over sending U.S. ground troops to fight IS. A Gallup survey said that 47 percent of Americans favored sending more ground troops to Iraq and Syria and 46 percent were opposed.

Carter said the U.S. also is expanding attacks on the militants' infrastructure and their sources of revenue, particularly from oil.

"Over the past several weeks, because of improved intelligence and understanding of ISIL's operations, we've intensified the air campaign against ISIL's war-sustaining oil enterprise, a critical pillar of ISIL's financial infrastructure," Carter said, using another acronym for the Islamic State group. "In addition to destroying fixed facilities like wells and processing facilities, we've destroyed nearly 400 of ISIL's oil tanker trucks, reducing a major source of its daily revenues. There's more to come, too."

Gen. Joseph Dunford, the chairman of the Joint Chiefs of Staff, testified alongside Carter, saying that in the past month or so, attacks on IS have disrupted 43 percent of its revenue stream.

In a later exchange with Rep. James Langevin, D-R.I., Carter elaborated on the prospect of using the expanded special operations force in Iraq to conduct raids inside Syria

READ MORE ON ABC NOW
Posted by Steve Douglass at 11:35 AM 1 comment: