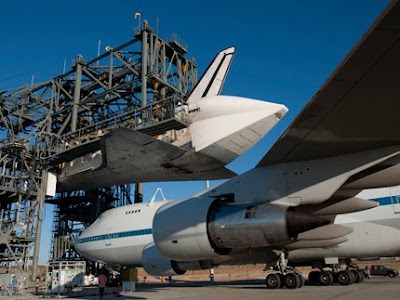 Improving weather conditions over the south and southeastern portions of the United States have led NASA managers to approve beginning space shuttle Discovery’s ferry flight from Edwards Air Force Base in Southern California to the Kennedy Space Center in Florida on Sunday morning.

Discovery, mounted atop its modified Boeing 747 Shuttle Carrier Aircraft, is slated to lift off Edwards’ main runway 04R at about 6:20 a.m. Sunday, or about 20 minutes before sunrise, on the first leg of the ferry flight. The 747-shuttle combo is scheduled to make a refueling stop at Rick Husband International Airport in Amarillo, Texas, and one other intermediate stop before reaching Barksdale Air Force Base in Shreveport, La., Sunday evening, and then continue on from Barksdale to Kennedy Monday morning.

Although Edwards Air Force Base will not be open to the public for viewing of the shuttle /747 combo’s departure, good viewing is possible from a position along 20 Mule Team Road a few miles west of the town of Boron immediately north of the base’s northern boundary.
Posted by Steve Douglass at 2:27 PM No comments: 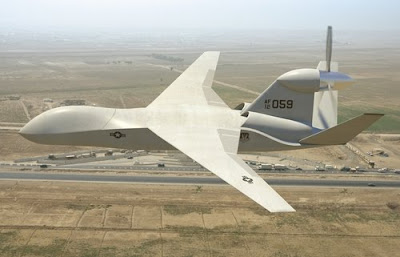 Lockheed Martin's Skunk Works has unveiled a concept for the US Air Force's planned MQ-X follow-on to its MQ-1 Predator and MQ-9 Reaper UAVs. It's stealthy, as one would expect from the Skunks, and it's modular, which is the USAF's watchword for future unmanned aircraft, And it has a couple of unusual features.

The propulsion system is a hybrid: a pair of jet engines for high transit and dash speed, and a turbo-diesel driving a propeller for longer, lower-speed loiter. Used together, the engines can push the UAV to higher altitudes so it can bridge the gap between the medium-altitude Reaper and high-altitude Global Hawk.

The 300hp-class turbo-diesel engine is housed in the pod on top of the central fin, which is there so the propeller can be mounted high between the V tails to shield it from radar.

The fuselage is F-22/F-35-sized, with internal sensor and weapons bays, and is designed to take mission-specific modular wings. A shorter wing would be fitted for the medium-altitude hunter/killer role, providing higher speed at the expense of endurance, which would be around 20-30h at 20,000-25,000ft. A longer wing would boost altitude capability to above 40,000ft and endurance beyond 40h for more-persistent ISR missions.

The USAF is putting the finishing touches to its requirements for MQ-X, so we should know more soon. Meanwhile, the Skunks' design may look familiar to some Ares readers, as something very similar appeared on a Raytheon briefing chart at the Paris air show. I haven't got to the bottom of that.

Posted by Steve Douglass at 5:19 AM No comments: