America to Iran - that was not nice - go to your room! 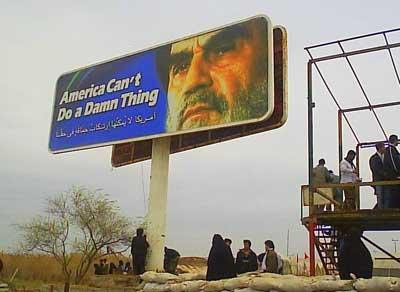 Washington (CNN) -- With many sanctions already in place, the U.S. government is poised to take an even stronger stance Wednesday against Iran amid allegations that Tehran was behind a plot to assassinate a Saudi envoy on U.S. soil.

A naturalized U.S. citizen holding Iranian and U.S. passports is in custody, and another -- a member of Iran's Revolutionary Guard -- is likewise charged in the alleged murder-for-hire scheme targeting Saudi Arabia's ambassador to the United States. Attorney General Eric Holder said Tuesday that elements of Iran's government directed the plan.

The accusations have rankled many throughout Washington.
Rep. Peter King, a New York Republican and chairman of the House Homeland Security Committee, called carrying out such a scheme an "act of war" five times during a five-minute CNN interview.

"We should not be ... automatically saying we're not going to have military action," King said Tuesday night, saying that this "flagrant and notorious" alleged plot brought already testy relations between the United States and Iran to a "very precipitous level."

"Everything should be left on the table when you are talking about a potential attack (in) the United States, an act of war."

Mohammad Khazaee, Iran's permanent representative to the United Nations, said Tuesday night that he was "shocked to hear such a big lie."

He said the chain of events outlined by U.S. authorities was an "insult to the common sense" of people everywhere.

A senior U.S. defense official said Tuesday that there has been no change in U.S. military posture in reaction to the alleged terror plot.

No U.S. Navy ships, for example, have been repositioned and there currently are no plans to do so.

"The act is already done," the official said, noting the plot purportedly has been disrupted and calling it "much more of a law enforcement matter" than a military one.
"One of the people involved is still at large, but the other principal is in custody. So what does changing military posture do?"

Already, the U.S. government has numerous sanctions against Iranian interests, amid continuing concerns about Tehran's budding nuclear program and its alleged ties to terrorism.

The focus on this front will be to urge other nations to join Washington and get tougher on Iran, a senior State Department official said Tuesday.
U.S. Secretary of State Hillary Clinton and other senior diplomatic officials will place calls to foreign leaders and U.N. Security Council representatives, the official said.

That includes reaching out to key figures from countries, such as Russia and China, which have diplomatic relations with both Washington and Tehran.
Senator condemns alleged Iranian plot Rep. Rogers: Terror plot a big deal Iran calls plot 'fabrication' Iran accused in other terror plots.

The United States also plans on getting in touch with leaders from the Gulf Cooperation Council (a coalition of Persian Gulf nations), the Organization of the Islamic Conference (which consists of 56 Islamic states and promotes Muslim solidarity) and the Arab League, said two Obama administration officials.
"It is a tremendous opportunity for the United States and the world to create pressure (on Iran)," Sen. Robert Menendez, D-New Jersey, said on Tuesday. "We have the opportunity to change the dynamics."

The idea is to push others to enforce existing sanctions, implement new ones, cut ties with Iran's powerful Revolutionary Guard and generally join the United States in a "chorus of international condemnation," according to the State Department official.
"(They'll) go to other countries and say this is a serious escalation of Iran's use of political violence," a senior Obama administration official added.
If there is an international debate, Iran fired its first salvo Tuesday night. Khazaee wrote U.N. Secretary-General Ban Ki-moon to "express our outrage" over what he called "fabricated and baseless allegations."

"As the Secretary-General of the United Nations you have an important responsibility in enlightening the international public opinion about the dangerous consequences of warmongering policies of the United States government on international peace and security," the Iranian envoy wrote.

Yet such rhetoric has not appeared to have much of an impact, as of yet, in Washington, with politicians from both major parties insisting that the entire Iranian government be held responsible.
Posted by Steve Douglass at 8:06 AM No comments: