B-1Bs practicing to pound North Korea - and on their way to Guam. 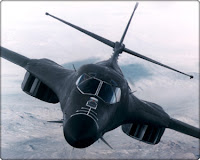 I intercepted an interesting communication off a military satellite (most likely UFO) yesterday.

A B-1B (SLAM ONE) was training to hit a "missile facility"possibly a practice run for a mission in the DPRK - but with a school bus depot in Snyder, Texas standing in for the real thing.

You can ascertain the coordinates for Snyder, Texas from the audio.

Here's a link to those coordinates on Google Maps: http://goo.gl/maps/Ss4UP 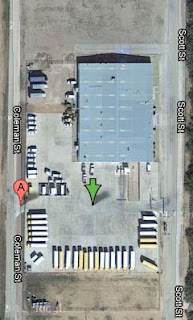 The B-1 was  from Ellsworth AFB  and practice-bombed (no real ordinance was expended) a school bus depot (yard) in Snyder, Texas.

Now using a little educated guesstimation based on the look of the yard on Google Maps - the school buses could have been a decent stand-in for mobile missile launchers and the building next to it the "missile maintenance" center.

You'll also notice they mention SA-6 and SA-8 - these are mobile ground-to-air missile launchers similar to this Russian example: 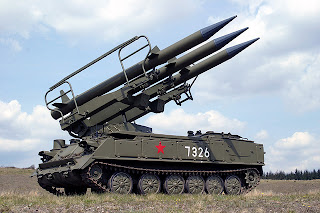 SLAM ONE was cleared to use 2000 lb GBU 3 JDAMS to take out the hypothetical target.


All communications were made in the clear.

PS:  A source in Oklahoma says Tinker AFB just sent 2 E-6 Mercury aircraft up. The controller remarked on their departure:  "Be safe and see you back in a few weeks. Come back in one piece!"

PPS: You can listen in to the heavy iron flying westward on the live radio feed at the top of this page.

Please note: There are two receivers on the feed - civil and military ATC communications. Sometimes you'll hear an overlap. 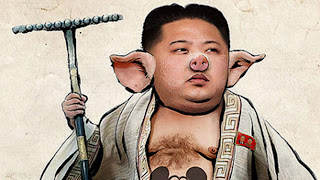 The North's Uriminzokkiri Twitter and Flickr accounts stopped sending out content typical of that posted by the regime in Pyongyang, such as photos of North's leader Kim Jong Un meeting with military officials.

Instead, a picture posted Thursday on the North's Flickr site shows Kim's face with a pig-like snout and a drawing of Mickey Mouse on his chest. Underneath, the text reads: "Threatening world peace with ICBMs and Nuclear weapons/Wasting money while his people starve to death."

Another posting says "We are Anonymous" in white letters against a black background. Anonymous is a name of a hacker activist group. A statement purporting to come from the attackers and widely circulated online said that they had compromised 15,000 user records hosted on Uriminzokkiri.com and other websites. The authenticity of the statement couldn't be confirmed, but the North's official website did not open Thursday.

North Korea opened its Twitter account in 2010. It has more than 13,000 followers. The North uses the social media to praise its system and leaders and also to repeat commentaries sent out by North's official Korean Central News Agency.

Tensions have been high in recent days between North and South Korea, and the North's military warned Thursday that it had been authorized to attack the U.S. North Korea is angry about sanctions against its nuclear program and joint military drills between the U.S. and South Korea.
Posted by Steve Douglass at 8:51 AM No comments:

CNN: South Korean Defense Minister Kim Kwan-jin told a parliamentary committee in Seoul that the North has moved a medium-range missile to its east coast for an imminent test firing or military drill. The missile doesn't appear to be aimed at the U.S. mainland, Kim said, according to the semi-official South Korean news agency Yonhap.

The movement of the missile is "of concern, certainly to the U.S. military and to Japan," said Mark Fitzpatrick, director of the Non-Proliferation and Disarmament Program at the International Institute for Strategic Studiesin London.

He said he believed the missile in question was a Musudan, a weapon the North hasn't tested before that is based on a Soviet system with a range of about 2,400 kilometers (1,500 miles), far enough to reach Japan but not Guam.

The U.S. military, which has a string of bases and thousands of troops in Japan, has already moved two warships and a sea-based radar platform closer to the Korean Peninsula to monitor possible missile activity, U.S. defense officials said earlier this week.

"The concerning development is if they test a Musudan and it works, then they have a new proven system that could reach anywhere in Japan," Fitzpatrick said.

Another worry is that the missile's test flight could pass over Japan, straining nerves in an already jittery region.

North Korea isn't believed to have an operational missile that can reach the U.S. mainland at the moment.

The medium-range missile will probably take about two weeks to prepare, Fitzpatrick said, which means a potential launch could coincide with the April 15 anniversary of the the birth of Kim Il Sung, the founder of North Korea and grandfather of its current leader, Kim Jong Un.

Known as "the Day of the Sun," Kim Il Sung's birthday is a major public holiday in North Korea that is usually accompanied by large-scale parades.
Posted by Steve Douglass at 5:57 AM No comments: