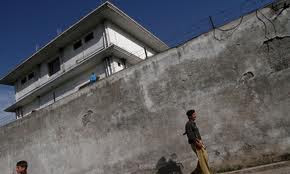 Mid-ranking Pakistani army officials may have known that Osama Bin Laden had a safe house in Pakistan, leaked material appears to indicate.

The claim was made in e-mails allegedly from US-based security think tank Stratfor, which were published by the whistleblowing website Wikileaks.

Stratfor warned ahead of publication it would make no comment on whether the emails were authentic or inaccurate.

The al-Qaeda chief was killed in the Pakistani garrison town of Abbottabad in May last year in a covert mission by US special forces.

The compound in the north-western town was demolished by Pakistani authorities last weekend.

There has been intense suspicion over how much Pakistani authorities knew of Osama bin Laden's whereabouts but never any definitive proof - or at least none that has been made public. There's no smoking gun, as one Western intelligence official told me.

The Stratfor emails - if they are genuine - on the surface might appear to contradict that and seem remarkably specific about the details of who knew what. But the problem remains knowing whether they amount to real evidence.

The fact Stratfor itself never made more of the information might indicate that they were not sure of its truthfulness or had other information to contradict it. The claims could of course be true but one email from an un-named source to a private intelligence company that has been leaked is not really enough to constitute a smoking gun.

One email from a senior Stratfor employee to colleagues is quoted as saying: "Mid to senior level ISI and Pak Mil with one retired Pak Mil General that had knowledge of the OBL arrangements and safe house."

The messages go on to say that the names and specific ranks of these generals were unknown to the writer, but adds that US intelligence may have that information.

The emails allege that as many as 12 officials may have known, but says it is unclear exactly what position they may have had or even if they were retired personnel.

The information was allegedly obtained from material taken from the compound last May, according to the email exchange which took place in the weeks after the al-Qaeda chief's death.

It is unclear if the information was passed to the Pakistani government but the employee is quoted saying "I would not pass the info to the GOP [government of Pakistan], because we can't trust the them.

READ THE REST OF THE STORY HERE AT THE BBC
Posted by Steve Douglass at 7:06 AM No comments:

Israel says won't notify US if they attack Iran

Israeli officials say they won't warn the U.S. if they decide to launch a pre-emptive strike against Iranian nuclear facilities, one U.S. intelligence official familiar with the discussions told the Associated Press. The pronouncement, delivered in a series of private, top-level conversations, sets a tense tone ahead of meetings in the coming days at the White House and Capitol Hill.

Israeli officials said that if they eventually decide a strike is necessary, they would keep the Americans in the dark to decrease the likelihood that the U.S. would be held responsible for failing to stop Israel's potential attack. The U.S. has been working with the Israelis for months to persuade them that an attack would be only a temporary setback to Iran's nuclear program.


Israeli Prime Minister Benjamin Netanyahu and Defense Minister Ehud Barak delivered the message to a series of top-level U.S. visitors to the country, including the chairman of the Joint Chiefs of Staff, the White House national security adviser and the director of national intelligence, and top U.S. lawmakers, all trying to close the trust gap between Israel and the U.S. over how to deal with Iran's nuclear ambitions.

Netanyahu delivered the same message to all the Americans who have traveled to Israel for talks, the U.S. official said.

The official spoke on condition of anonymity to discuss sensitive strategic negotiations.
The White House did not respond to requests for comment, and the Pentagon and Office of Director of National Intelligence declined to comment, as did the Israeli Embassy.

Iran claims its nuclear program is for peaceful purposes, but the International Atomic Energy Agency has raised alarms that its uranium enrichment program might be a precursor to building nuclear weapons. The US has said it does not know whether the government has decided to weaponize its nuclear material and put it on a missile or other delivery device.

The secret warning is likely to worry US officials and begin the high level meetings with Israel and the US far apart on how to handle Iran.

But the apparent decision to keep the U.S. in the dark also stems from Israel's frustration with the White House. After a visit by National Security Adviser Tom Donilon in particular, they became convinced the Americans would neither take military action, nor go along with unilateral action by Israel against Iran. The Israelis concluded they would have to conduct a strike unilaterally -- a point they are likely to hammer home in a series of meetings over the next two weeks in Washington, the official said.

Barak will meet with top administration and congressional officials during his visit. Netanyahu arrives in Washington for meetings with President Barack Obama next week.
The behind-the-scenes warning belies the publicly united front the two sides have attempted to craft with the shuttle diplomacy to each other's capitals.

"It's unprecedented outreach to Israel to make sure we are working together to develop the plan to deter Iran from developing a nuclear weapon," and to keep them from exporting terrorism, said Maryland Rep. Dutch Ruppersberger, the top Democrat on the House intelligence committee.
He traveled there with the intelligence committee chairman, Rep. Mike Rogers, R-Mich., to meet Israel's prime minister and defense minister, along with other officials.

"We talked about the fact that sanctions are working and they are going to get a lot more aggressive," Ruppersberger added.

They also discussed talked about presenting a unified front to Iran, to counter the media reports that the two countries are at odds over how and when to attack Iran.

"We have to learn from North Korea. All those (peace) talks and stalling and they developed a nuclear weapon," he said. "We are going to send a message, enough is enough, the stalling is over. ... All options are on the table."

"I got the sense that Israel is incredibly serious about a strike on their nuclear weapons program," Rogers told CNN on Monday. "It's their calculus that the administration ... is not serious about a real military consequence to Iran moving forward


Read more: FOXNEWS
Posted by Steve Douglass at 5:54 AM No comments: